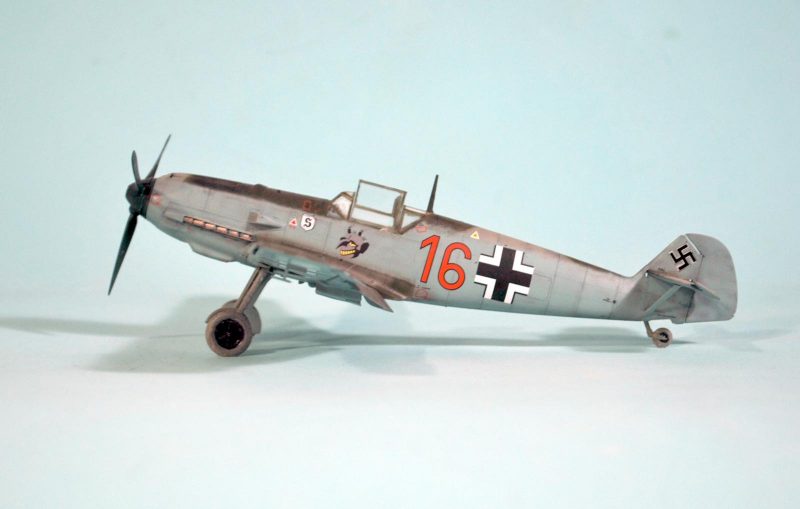 The Bf-109E-1 was the first sub-type of Messerschmitt’s fighter to receive the DB 601 engine. Ourside of the powerplant and cooling system, which included radiators under each inboard wing, the airframe was essentially the same as the preceding Bf-109D, with an armament of four 7.62mm machine guns, two in the upper fuselage firing through the propeller and one in each wing outboard of the main landing gear. The E-1 preceded the cannon-armed E-3 into production, though after the E-3 achieved production status the two sub-types were produced concurrently. The machinegun-armed E-1 was seen as the mount for a wingman, while the cannon armament of the E-3 made it the aircraft of a rottenfuehrer (element leader) or flight leader. As things worked out, many E-1s were brought back to the factory and reworked to allow them to carry the MG-FF wing cannon, while others retained their original armament bur were modified to become E-1/B fighter bombers. The E-1 was still in use in the fighter-bomber role on the Eastern Front as late as 1942.

Fritz Losigkeit joined the Prussian State Police in 1934 after graduation from school. The following year he transferred to the Reichswehr as an officer candidate. He was sent on to flight training and graduated in 1936, assigned to JG 132 “Richtofen.”

Losigkeit arrived in Spain on March 25, 1938, assigned to 3. Staffel of Jagdgruppe 88, at the time headed by Oberleutnant Horst Lehrmann and based at Zaragoza Airfield On May 31, 1938, during the second mission of the day, Oberleutnant Werner Mölders led four fighters on a ground attack mission. Losigkeit was shot down by 20 mm anti-aircraft artillery while attacking trucks, and taken prisoner of war. He spent eight months as a “guest of the Spanish Republic” in Valencia and Barcelona before his release and return to Germany in February 1939. He was awarded the Spanish Cross in Silver with Swords (Spanienkreuz in Silber mit Schwertern) on April 14, 1939. He then received orders to 2. Staffel, a squadron of I. Gruppe of Jagdgeschwader 26 (2./I/JG 26. 2. Staffel was commanded by Hauptmann Walter Kienitz while I. Gruppe was headed by Olympic medalist Major Gotthard Handrick

On 23 September 1939, Losigkeit was appointed Staffelkapitän of 2. Staffel. He claimed his first victory, a Spitfire, on May 23, 1940. during the Battle of Dunkir On June 1, he engaged Spitfires of 19, 222 and 616 squadrons over the Dunkirk beachhead, claiming one Spitfire. Following the Armistice on June 22. 1940, which ended the Battle of France, JG 26 returned to Germany for rest and replenishment.

On June 17, 1941, Losigkeit completed his tour as Staffelkapitän of 2. Staffel of JG 26 and was transferred to the staff of the military attaché in Japan. In Japan he instructed JAAF polots in Luftwaffe combat tactics and participated in comparison trials with the Nakajima Ki-44 against several examples of the Bf 109 sent to for evaluation. In January 1942 he returned to Germany aboard the German blockade runner MSS Elsa Essberger. In January 1942, On his return to Germany, he joined the staff of Adolf Galland, by then General der Jagdflieger and participated in planning The Channel Dash that February.

Losigkeit then took command of a new IV/JG 1 following the transfer of an earlier IV Gruppe to JG 5. Under his command, IV Gruppe’s staffeln adopted the bright black and white checkerboard and striped cowlings on their Fw 190s. On April 17, 1943, he shot down his first four-engine bomber, a B-17 during an attack on the Focke-Wulf factory at Bremen.

In May 1943, Losigkeit requested transfer to the Eastern Front, where he took command of I/JG 26 until it returned to the Channel Front in August, at which time he took command of III/JG 51 "Mölders." During the Battle of Kursk in July 1943, Losigkeit claimed two La-5s shot down on July 5. The following day, he claimed another La-5 destroyed. Later that day, he was credited with shooting down a LaGG-3 fighter.On July 7, III Gruppe claimed 17 victories, including a MiG-3 by Losigkeit, for the loss of one Fw 190 from 8. Staffel. Losigkeit was awarded the German Cross in Gold on October 17, 1943.

Losigkeit took command of JG 51 on April 1, 1944. Leading it for the next year as the Germans retreated out of the USSR amd omtp Germany. He took command of JG 77 in April 1945. At the time of the surrender in May, the unit was in Czechoslovaki, where he took a Ju 52 and flew it to Munich to escape the Soviets and surrender to the Americans. Over the next two years, he was involved in the eastern European espionage organization created by Reinhard Gehlen.

Wingsy Kits has released a very good series of 1/48 A5M Claude fighters, and the Ki-51 Sonia. This Bf 109E-1 is the first of a series of Bf-109Es and was released this past May.

The kit has superb surface detail, and is the only Bf-109E kit that is completely dimensionally correct other than the Airfix Bf 109E kits. This is a high end limited run kit, on a par with kits from Dora Wings, Modelsvit and AMG. In terms of final look, it is thoroughly competitive with anything from Eduard. The kit provides markings for four Bf 109E-1s, two from the Polish campaign including one flown by Josef Priller, and two from the Battle of France/Battle of Britain period, including the Battle of France aircraft flown by Fritz Losigkeit.

I particularly like the fabric control surfaces. Some have said these parts are blank – that’s not accurate, If you hold them under the light, you can see verrryyy subtle “hills and valleys,” the way a fabric covered surface really is!

I started with the cockpit and pre-painted everything before removing any parts from the sprue. The kit has decals that snuggle right down on the injection-molded instrument panel, which is in two parts as it should be.

Proceeding to the wing, unmodified the kit results in a model with the flaps raised. However, it was easy to trim the main lower flap hinge at the outer edge of the radiators, which will allow the flap to be positioned down. I also drooped the ailerons the slight bit they were in the landing configuration. The leading edge slats are really good – there is no “ledge” there and the wing looks correct. This is the only 109 kit in this scale that does this.

There are no assembly problems with this kit. Everything goes together without the slightest problem. In fact, I would go so far as to say that in terms of production design and production quality, this beats Tamiya and Eduard can feel a hot breath on their neck.

I painted the scheme for Losigkeit’s airplane with Tamiya paints for the 71/92/65 scheme. The kit decals went down without problem and melted into the petite surface detail under an application of Solvaset.

This is definitely the best Bf 109E, for detail, accuracy, and buildability. The surface detail rivals Eduard’s best. Overall assembly is easy – this would be a kit I could recommend to anyone returning to the hobby after a long layoff, or anyone new to the hobby. Follow the instructions and success is guaranteed. This really is a “weekender.” 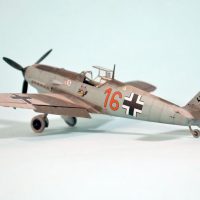 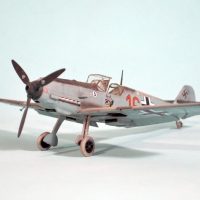 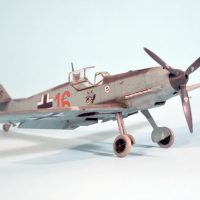 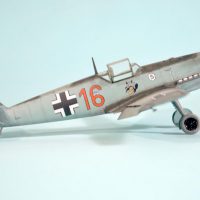 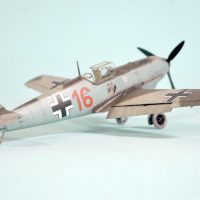 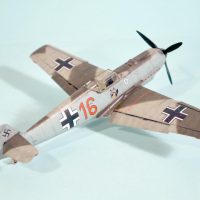 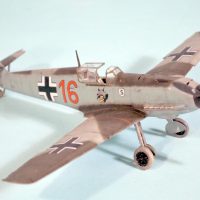 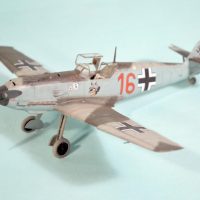 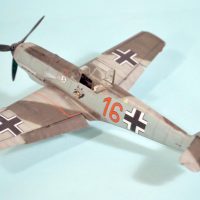 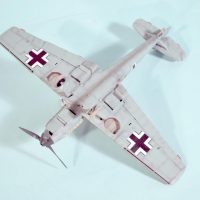 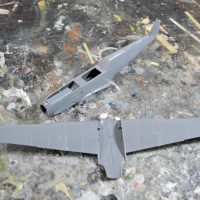 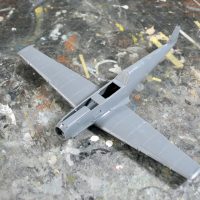 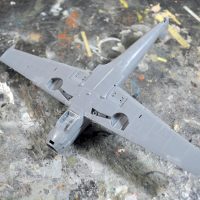 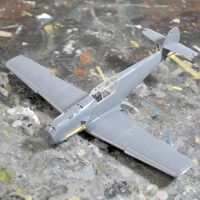 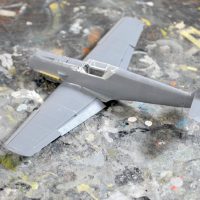 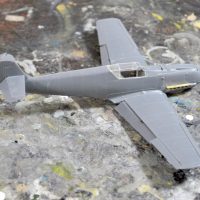 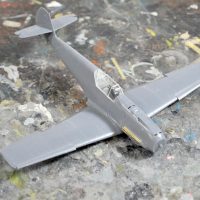 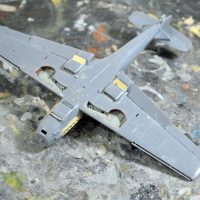 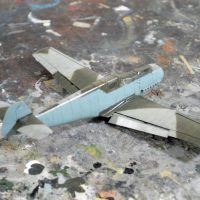 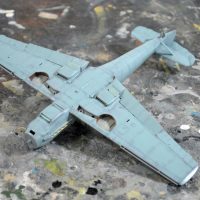 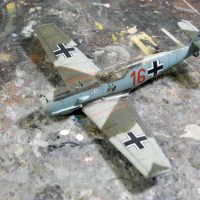 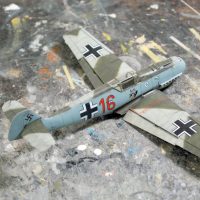 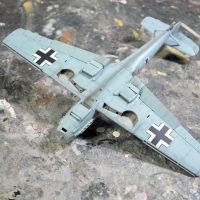 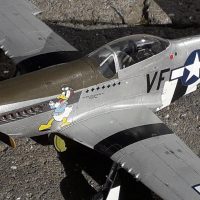 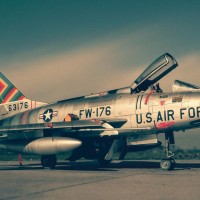 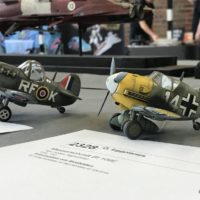 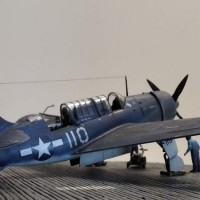