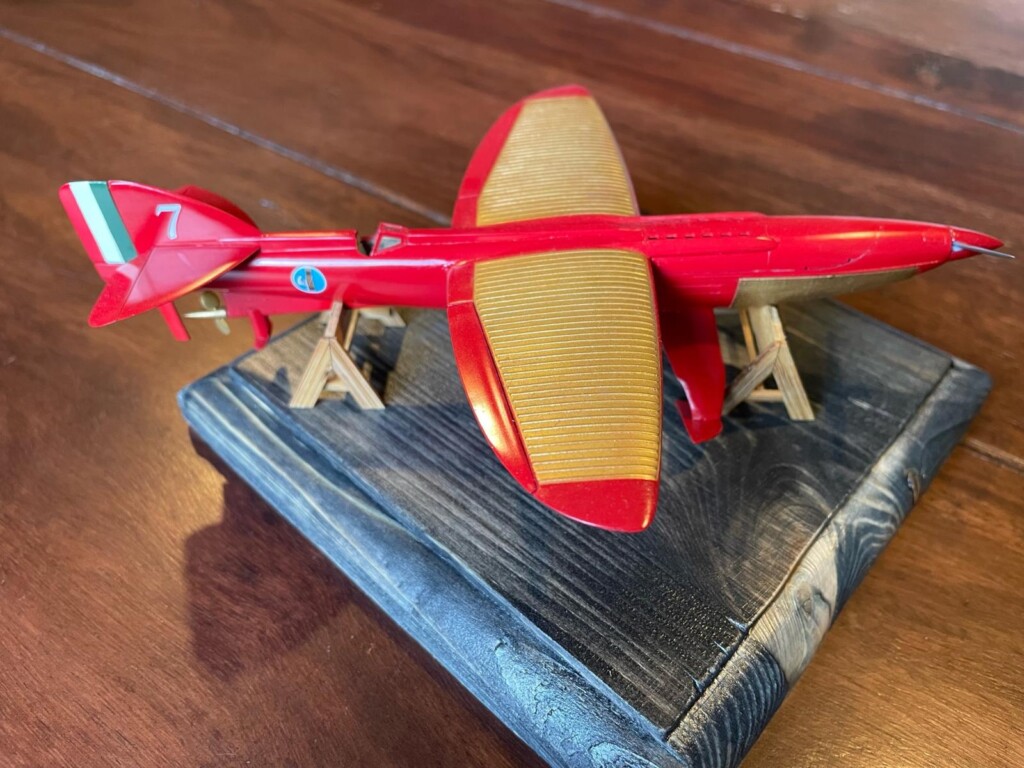 This time I share with you a subject that is closer to my heart. It is a strange, but beautiful, as a real italian engineering creation.

It was develepoed for one reason, to win the well known Schneider Trophy for Italy in 1929. After being defeated many times in the last 5 years, except for 1926, Italy lost the race to win the trophy. Interesting to know that in 1925 at Baltimore, Lt. James H. Doolitle won the trophy for the USA. Yes the same Doolitle, who led the Tokyo raid after Pearl Harbour. Anyway, the Schneider Trophy became top notch race over the years, leading to cutting edge designs. Sometimes the engineers and designers had to dream big and daring. Most of the time they paid off, sometimes not. This bird was the latter unfortunately, however it had it’s potentials. The main idea was that initially the plane should have been speeded up by the boat propeller at the end. It should have lifted up by it’s skids, once it is done, the pilot clutched the main propeller, revving up and taking-off. Honestly I have no idea, what was the idea regarding the landing, since it should have landed in ont he open seas during race. In reality, the plane never got airborne. It was tested on Garda lake, buta s the test pilot speeded up, the water sprayed up so heavily, the pilot lost all visual. Unfortunately after testings, the project was abandoned and Italy attended with the rival’s Macchi M.67 and older M.52R flown by Wt. Off. T. Dal Morin who became best along Italy, finishing on 4th place.

The kit itself is a product of AMP, a Ukrainian brand. The kit is molded nicely, but it’s clearly visible, it is a short-run kit. As for accuracy, there isn’t much except a few drawing to compare, it looks OK, however the scale is inaccurate, it’s more like in 1:50 ish scale. All in all, it is a well detailed kit, and building is straightforward, if one fancy it, the engine is included and can be shown.
The reason I built it, is because the unique shape captured my attention, and later read about the whole idea, made my mind, to have one on my shelf. If you want, it is a weekend kit literally. All in all it took me a few days to put it together, and paint it. For paint, I used grey primer, which was polished before the MRP Corsa Rosso and MRP Gloss Varnish. The result was exceeding my expectations, it became a real glossy raceplane. ( Normally I don’t build so much golssy paints, actually I thought it is impossible ) Fort he coller radiators, I used Citadel brass paint, but I wasn’t happy with it, so carefully I removed it and Used Alclad brass instead. That was something I imagined, so the plane got a gloss coat. The rudder was painted accordingly, and the propellers got brass as well.
The decals were user friendly, the only place I didn’t use the decals were the tricolore ont he rudder and the nr. 7 on the nose. Speaking of the race markings, I was really wondering whether to put i ton or not at all, because I haven’t seen any pictures of the real prototype wearing it, but I thought since this plane never took off, and it is so „odd”, I made a decision to apply them ont he tail. After decalling, a final gloss coat was aplied to seal the decals and blend them in.

As a final step, I made a base from wood and two stands, since the plane looks weird and it is vulnerable sitting on it’s skids.

All in all, it is a fun little kit with its unique shape and historical background and frenetic engineering solutions. The little Pegna really draws everyone’s eyes, and I often get the question: What the heck is that little plane? 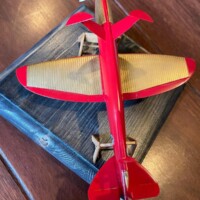 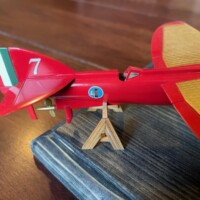 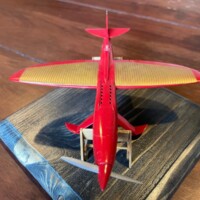 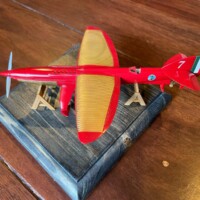 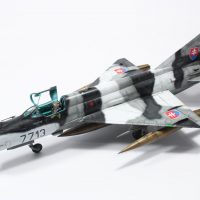 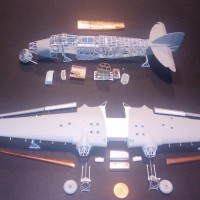 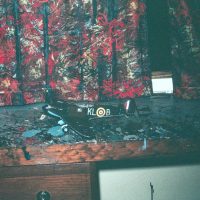 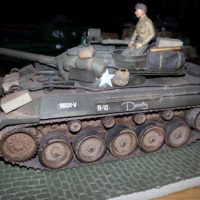