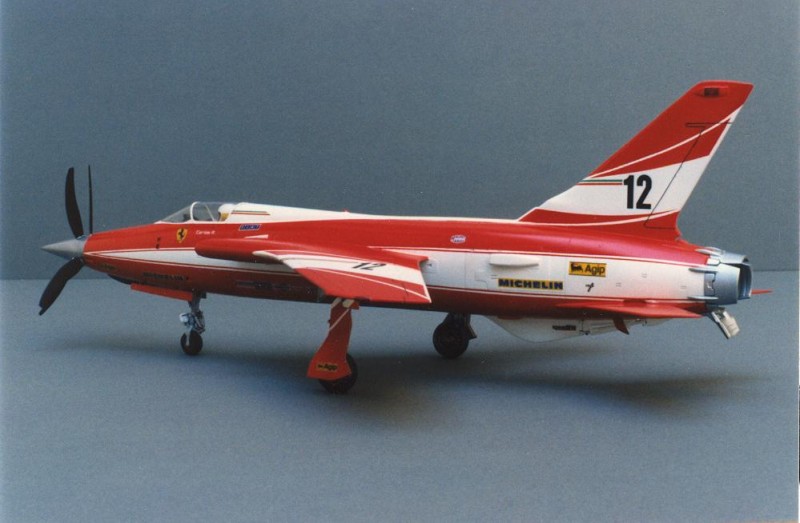 Back in the 1980s, I thought of doing a model of a hypothetical Ferrari air racer. I used the 1/48 Monogram F-105G kit, one of the 2 seaters, removing the 2nd cockpit. I had already done this to make the F-105D, as Monogram had not yet released the single seat version (they did about a month or so after I finished the conversion!). Using a Tamiya Formula 1 race driver figure, the Ferrari model became a 1/20 scale racer. I designed a color scheme, and used decals from the Tamiya F1 kit for numbers, sponsors, etc. I envisioned this as powered by a version of Ferrari’s 12 cylinder “boxer” engine, with twin turbochargers, mounted in the mid-rear fuselage, driving a 6 blade contra prop through a long drive shaft. I decided to write Enzo Ferrari a letter describing my project, and took photos of the model, which I sent also. He apparently enjoyed knowing about this, as not too long afterwards I received a beautiful book in the mail, from Italy, that he had written, and just published. Its title is “piloti, che gente…”, and my next door neighbor Romeo Bianchi told me it meant “drivers, what people…”. It is basically a book that features art, posters and photos of drivers and races throughout Ferrari’s racing history, and before, with Enzo Ferrari’s accompanying text. A fantastic book, which I feel very lucky to have. There was a letter also, in Italian, which my neighbor said congratulated me on realizing my idea, and that Ferrari was very pleased to know about my model. I still have this model intact. Unfortunately this was before I changed to acrylic paint, and I used Pactra enamel, so the white is now not quite as white as in the photos! Anyway, kind of a fun little episode. 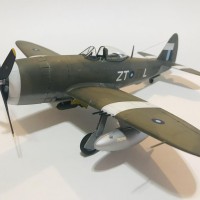 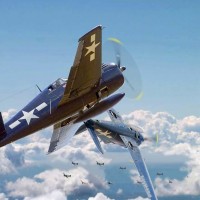