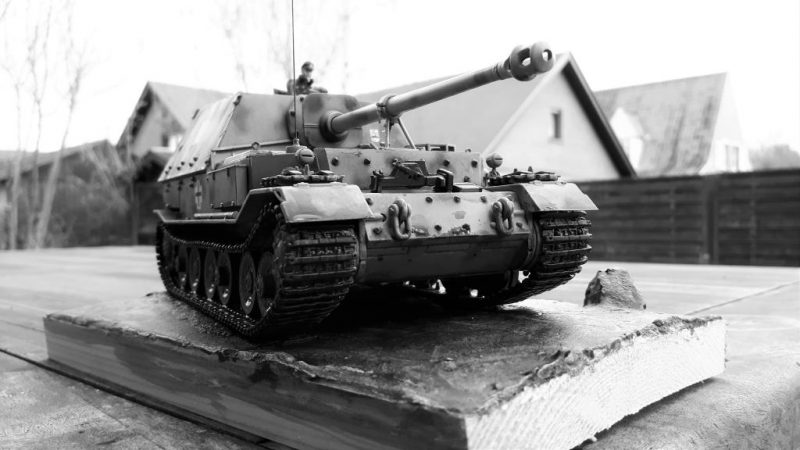 I bought this particular older kit (# 6133 dated 2001) out of the stash from another modeller in Germany. The Ferdinand was a formidable tank hunter embedded into the German Panzer Divisions during WWII. It was featured of the high velocity 88 mm Pak (Panzerabwehrkanone) 43/2 L/71 that was otherwise used in semi-mobile anti-tank version. Its chassis was designed by Ferdinand Porsche as the bid by the Porsche Nibelungenwerke in Austria for a heavy tank fitting the 88 mm (long) anti-aircraft gun as requested by the Waffenamt. This contract was eventually granted to the Henschel company in Kassel, Germany in the form of the infamous Tiger I tank.

Whether Porsche was too optimistic or otherwise, we will never know, but he had finished about a 100 chassis for the “Porsche Tiger” when he had to see the contract finally being awarded to Henschel! The German war industry was already very stretched at that time in 1942 and the its war-machine could use every mobile gun in the field, so it was decided to feature the hulls of a cazemate structure offering limited traverse and elevation to the infamous StuK 43/1 anti-tank gun. What resulted was the Sd. Kfz. 184 troops used to call the “Ferdinand” after the name of its creator.

The kit features the early version of the Ferdinand without the bow-machine gun later added in the “Elephant” version of this monster. Even without small armament, the Ferdinand was an impressive treat, with armour up to 200 mm on the forward side and able to knock-out sowiet tanks at ranges up to 4000 m (!) thanks to the gun’s excellent optics and flat shell trajectory. Nevertheless, the vehicle had its shortcomings when first used on the battlefield of Kursk in July 1943 in that its petrol-electric propulsion and gearbox were actually too weak for its 62 tonne weight and in any event gas guzzling. The Ferdinand was a slow behemoth and no match for a daring infantry team armed with simple Molotov-cocktails at close quarters… Nevertheless, it was the ultimate mobile answer to the masses of Soviet armour thrown into the fight by that time in the war.

The Ferdinand is popular with modellers of WWII armour and therefore there is much documentation available on the internet. I decided to stick with an in-box decal version for this tank hunter assigned to the 21st Panzer Corps as s.Pz.Jg.Abt. 653 (Schwehre Panzer Jäger Abteilung) at Kursk in July 1943. It was their job to try and breach the heavy Russian defenses in the North of the Kursk Salient (Bryansk front) and then drive to Kursk. The build was out of the box but I added some scratchbuilt items and a Tamiya figure to increase realism.

Building was rather straightforward as this kit does not have many parts for a typical Dragon kit. As there was no figure included in the kit, I added a Tamiya commander increase realism and in order to illustrate the sheer size of this monster. I decided to leave only the commander’s hatch open on the vehicle and fix the commander inside, given that the breech-end of the 88 mm main gun is not modelled in this kit. I left the small hatch at the back open as it was often used as the “escape hatch” for disposing of spent cartridges during firing. Nevertheless, I decided to fix the gun in the travel lock so that the vehicle is intended to move to a forward staging area in the hours preceding the onset of the Northern drive. I did not use any aftermarket items, the kit was built pretty much out of the box..

I airbrushed the vehicle first with a rusty base primer and then sprayed a rather generous coat of hairspray on top (yes hairspray!). Then followed the “Dunkelgelb” main colour on top and I then added the dark green camo patches as documented in the history books. The hairspray technique then allowed me to remove later layers of paint by rubbing the surface with a water dabbed sponge. What was left is the rusty base-coat, so you actually get a quite appealing rust effect on the finished vehicle.

I left the road wheels apart until the last moment, after I had fitted the individual link type tracks of which there are two types to be concatenated in alternating fashion. After a black base primer, I sprayed the fitted tracks with a mixture of steel, black and red-brown thinned Revell paint. After that, I weathered the vehicle with a wash of thinned black oil paint.

I added one commander figure in camo-uniform. The figure was taken from a Tamiya kit, assembled and primed using light-grey dull paint from the airbrush. I then hand painted it using self-mixed acrylics from an art store. The camo scheme on the commanders’ uniform was quite a challenge with alternating patches of light- and dark brown, green and sand colour. There are numerous spots of alternating color on it that are not for the faint-hearted because of the small size of the figure (about 50 mm). After all, I am quite pleased with the result and all that was left to do was mounting the diorama.

For this model, I made a small diorama out of a wooden base of about 20 to 15 cm size. I smeared a layer of grout on top and modelled a tank-trap in the form of a concrete triangle. I also added a little tree I found in the garden as a plant root and some smaller vegetation in the form of model grass. I was quite pleased when all was finally done!

I enjoyed this 1:35 build of the Dragon Ferdinand. The resulting diorama is simple but nice to watch and of course, the vehicles size relative to the commander figure is impressive! The black and white pictures in this post almost seem taken from the history books on the battle of Kursk! I hope you like it too!

I think I spent about 30 hours totals on this one. 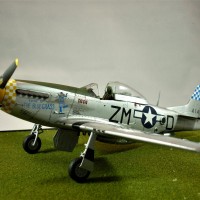 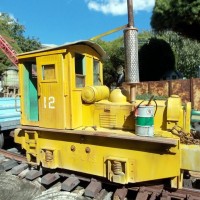 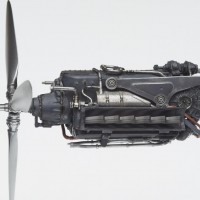 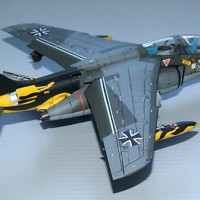 Alpha Jet – a ‘Year of the Cat’ build