Diorama in 1/35 scale by Italo Feregotto ( figure painting) and Roberto Colaianni
this time it’s a scene of fantasy, created taking more in consideration artistic aspect then absolute realism.
The story: nothing too complicated, the patrol found the wreck of a Huey dispersed and communicates the position to the command, what happened to the two surviving crew members, according to the helmets abandoned?
Although this work has been much discus, the most controversial aspects is the one concerning the skeleton of the pilot and the position of the helicopter.
Strangely, this time, after my initial thought, I have not deviated too much from the initial project creating more or less what was expected. Below, photos of '3 D high technology instruments I use to create my dioramas. 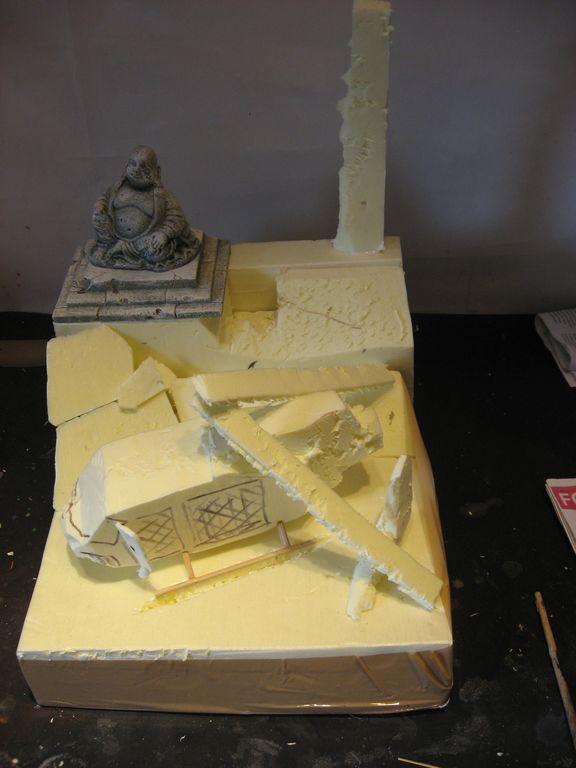 As usual, the construction of the diorama, figure, ruins and the helo, progressed simultaneously, but for clarity will be described separately.
Materials used.
UH-1C 1/35 scale MRC Academy
UH-1C Photo etched set Eduard Zoom (internal, external, and weapons).
Rivets Archer Surface Details
Several sets of paper leaves Kamizukuri. I hope I spelled it right, I speak perfectly the Japanese dialect of the north province, but the Southern dialect is difficult to me…..
Some of the Joe Fix Studio.
One figurines Hobby Fan (gunner)
Set of figure Bravo 6 (officer and radio operator)
Buddha Verlinden 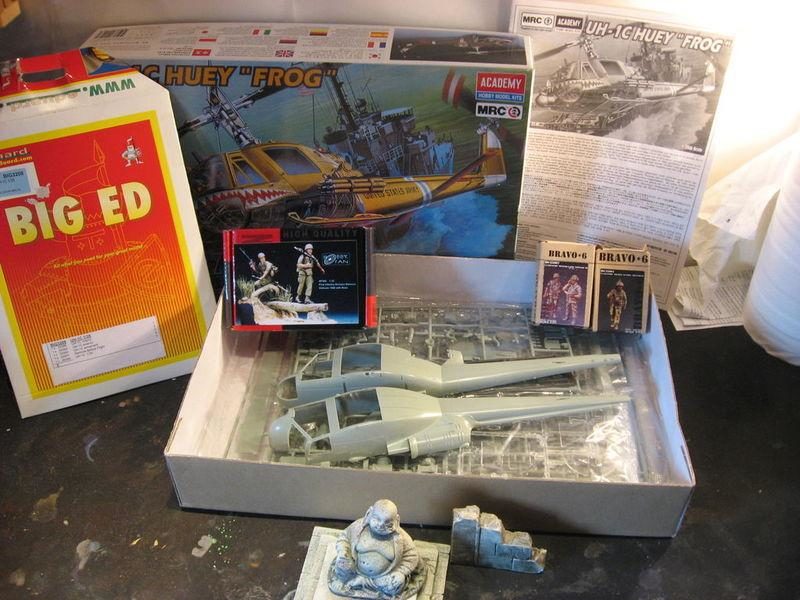 UH-1C Huey
I think one of the most challenging subject I have ever made from the point of view of modification and scratch build details. Initially it did not anticipate changes of this magnitude, but photos of models and real subject find on the net, led me to heavy scratch build. The space in my display cabinet, has forced me to sever the tail boom and the propeller blades, to reduce overall dimension. And I have been lucky, I should have mede to many plant and trees.
The construction started in May 2012, of course, starting from the inside; totally unsatisfactory the rear seat of the kit, which has been rebuilt with copper pipes glued with cyano, paper handkerchiefs, and scratch. I would have to reconstruct the gunner's seat, but laziness prevailed.
In this phase I had the idea of a dead crew in the cabin. I had start from the kit pilot and work with a mini drill the face and the body, to reduce the volume of the body. I’m not a sculptor, but I’m happy the way the skull look like, but I realize later I should have reduced more the volume of the legs, My wife was a little worry seeing many Human skull picture on m desk, my kids there were much more interested in my activity. 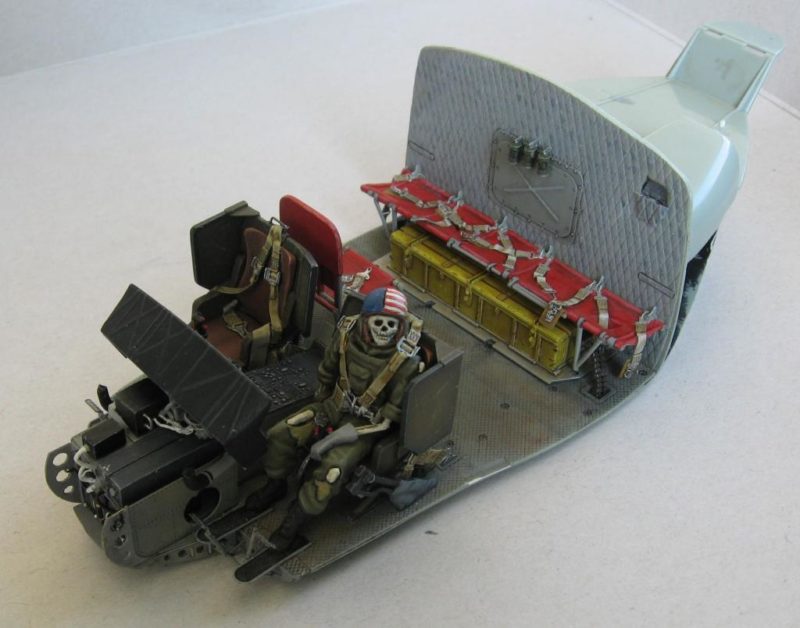 Before closing the lateral fusolage valve, i scrath build the inverter bay on the rear left side, and the front avionic bay. Mainly were used plasticard, copper and brass wire. All painted by brush with Valleio.

The broken fusolage rear has been worked in this phase with a mini drill. When the stirene become very thin, break easly, perfectly simulating the wrecked alluminum alloy. The Bulkheads are made by thin copper sheets.

With a round blade I work the fusolage lateral pannel, to simulate the bended pannel, as consequence of fusolage deformation.

I have been lucky, and a friend, former Agusta employees, give me the the original Bell UH-1C Training and maintenance manual. This give me the possibiliti to reproduce almost all the accessory, piping and wiring oft he engine. I have to say that I didn’t care to respect perfectly all detail dimension, but more to give the impression of a intricate and complicate item. To rebuild engine, engine bay and transmission, I worked a full summer. When i reach 200 pieces i stop counting. I use mainly plasticard rod and exhagons, different kind of wire, scratch materials, old PE frame ecc. 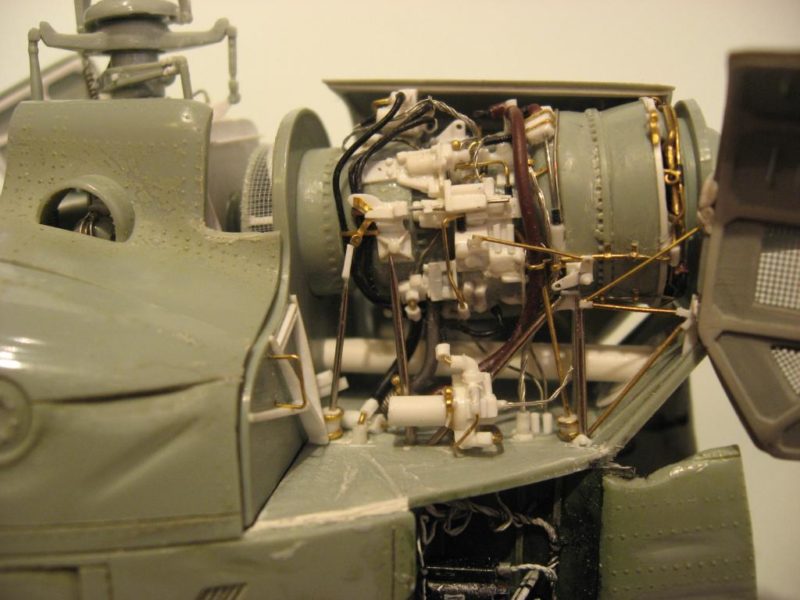 The most challanging part of this part was to build separately Engine, transmission and filter bulckhead separately, to be able to paint them easly, to be then assembled on the deck more or lessa as the real Helo connecting wires and tubing after positioning the main unit. 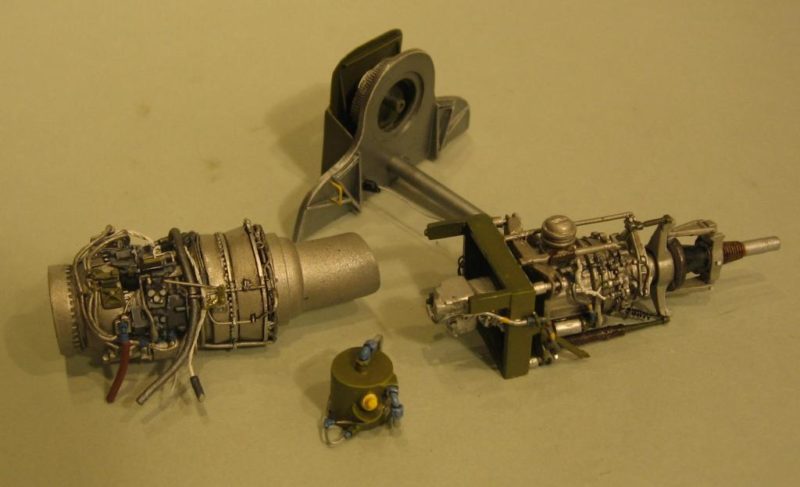 In the process to work the top fusolage pannel, in order to simulate damage cause by the impact on the ground, most of the original positive rivets were gone. I replace them with the Archer fine transfer Rivets. At the end of the process look like the machine get a kind of tropical sikness.

To position the rivets i brush two laiers of Glanzer, a German floor wax similar to Future directly on the stirene. The rivets line have to be posed as normal decals, using Microscale decals softner. When well dried i brush an additional layer of Glanzer, to better fix them. Not a difficult job, but loooooong.
Next I scratch build the left Minigun barrel, siring needle, copper tube and sheets have been used. Right minigun, not much visible since half sunk in the mud has been build olmost OOB. 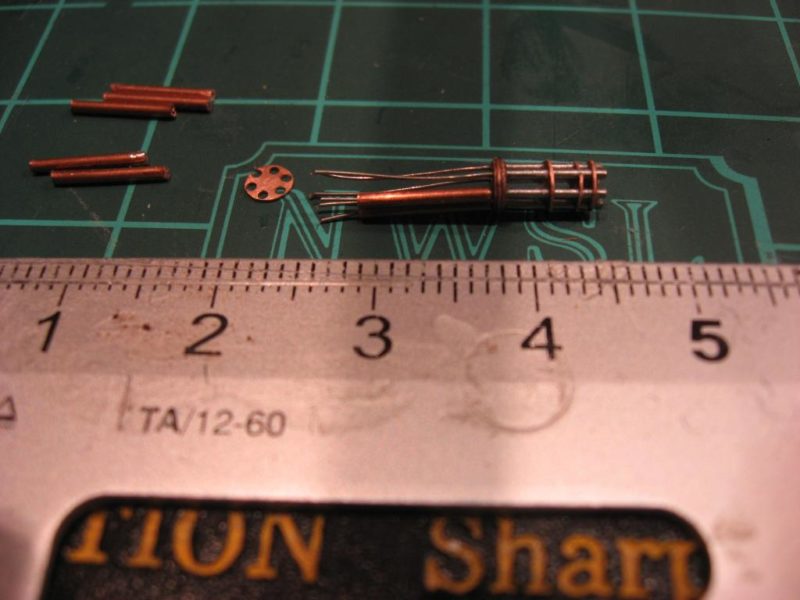 Also the 70 mm rocket launcher has ben modified, drilling them to look empty, except a miss fire victim.

A undamaged rotor, wasn’t compatible with the crash, with the figure positioning and would have cut the scene in a way I did not like it. Therefore I decideto cut it. The blade has been work from the inside as the rear fusolage, leaving only the external thin shell, some insulating foam covered with a tulle has been used to simulate the “ bee nest” filling materials. Valleio Blach and Humbrol Alluminum Dry brush ended the painting.
Initially i assembled the rotor OOB, no good to “simmetric” I then separate the blade fron the central support, repositioning them with a more realistic incidence angle. Also some of the rotor control rod were absent and has been rebuild. 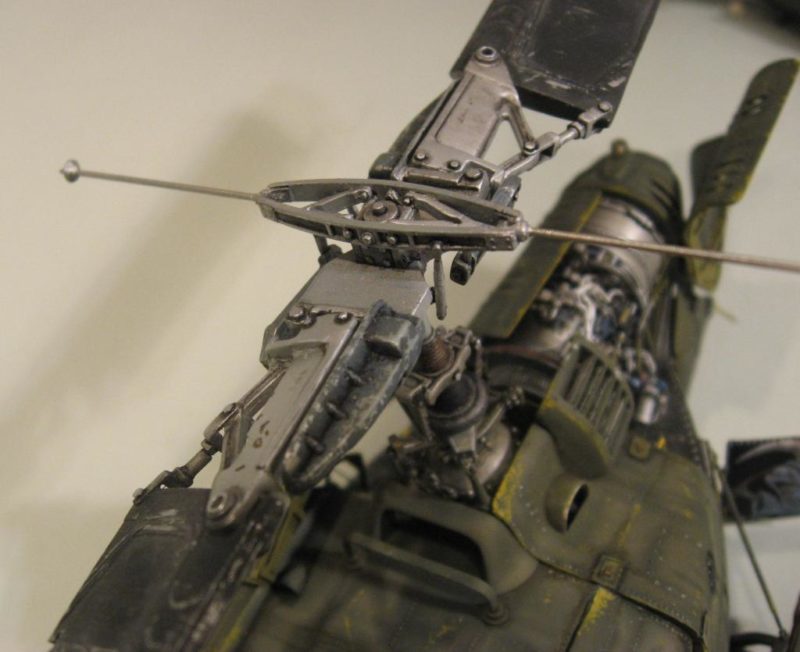 The pilots door have been also heavy modified to add thikness, rebuilding the interiors, absent on the kit part. The glass where cutted to reproduce partially open side window. Archers rivets were also added where appropriate

To mask a machine with all thi opening was a tedious task, further complicate by the rivets, easy to be teared away with masking tape. I have been lucky only 3 of 4 has been removed, and replaced. Painting start from the shark mouth, airbrushed with Tamiya Acrilics. My preferite colour for this kind of job due to the rapid drying propriety.

After hours spend to study photo of wreks and gateguardian, I wasn’t able to create a satisfactory mix to reproduce the faded helo drab. I then sit on my work bench, load the air brush with the most unprobable greens and browns and start spraying, a lamp on the vertical of the model create the natural shadows I try to reproduced with the darker mix.

On a dark green bette do not execeede with bright alluminum scratch, to prominent, I prefer to reproduce the yellow primer to transpare under the green. Tamiya zinc cromat by thin brush was therefore applied here and there on all the surface.

All numbers, tactical/unit sign on the tail boom has been painted, no decal at all. Please note as the first laiers of grenn has made all the detail disappear. The white is also reflecting light too much. But dont worry, some light and shade airbrushed, and a dry brush on the rivets will make everithing reappear again. 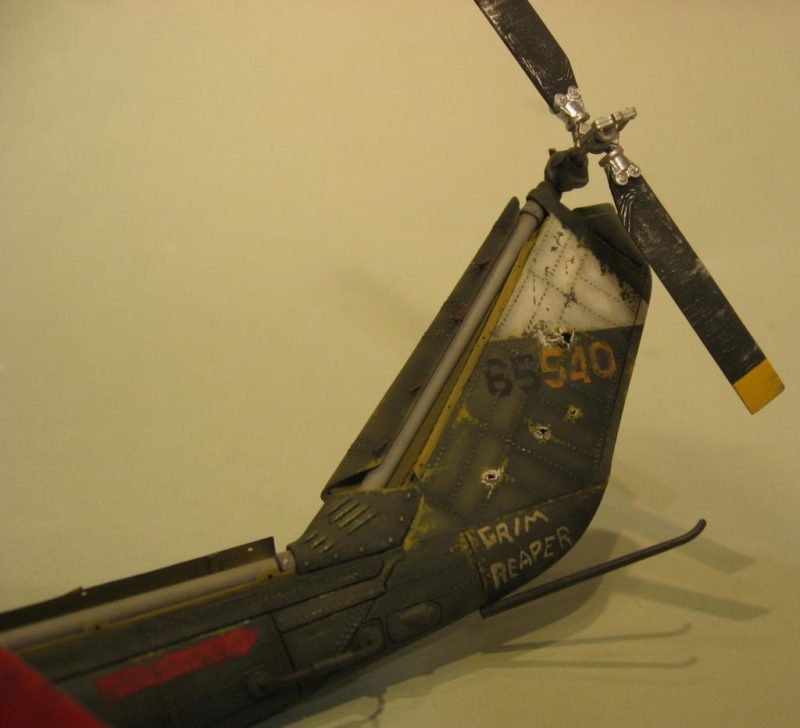 The gream reaper on the lateral bay doors, on the real helo, was painte by hand, slightly different on the two side, by an improvised artist. Thanks god Bill Horan was not a crew, therefore m limited capability of painter where enough to paint a decent nose art. 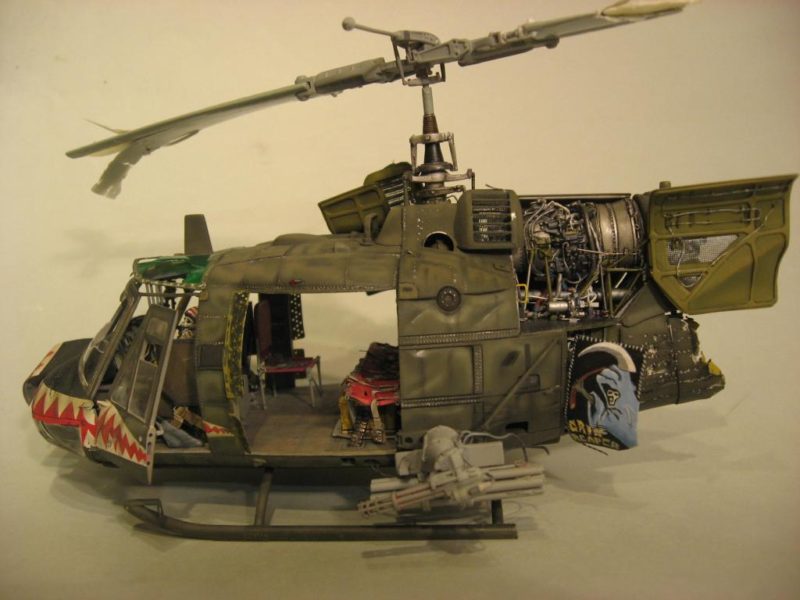 In the next part the build of the diorama.
Roberto “Target” Colaianni 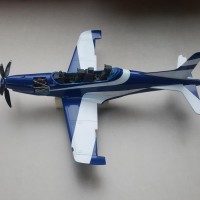 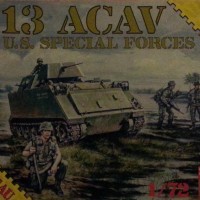 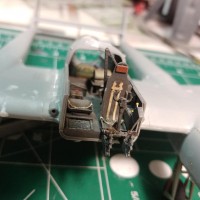 Five Years and nothing Finished!!
Walt B 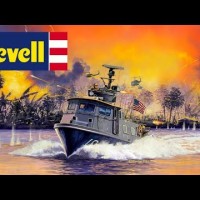