Now the fun part of building, the paint and decaling! I had previously blown up a set of Tamiya color plans to 1/32, and cut frisket masks for the standard Day bomber scheme of Dark green/Ocean gray over Medium sea gray. I washed the plane, let it air dry and wiped it with a tack cloth prior to paint. I use Tamiya paints exclusively so I can paint in the house, although I did get a set of Gunze Mr. Color mid war RAF colors that I will try out on the next RAF build. 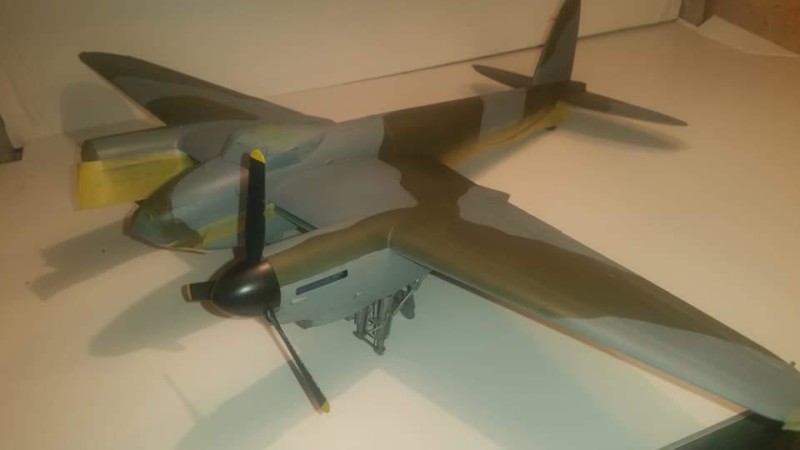 In no time I had the scheme complete. I while I'm busy congratulating myself on another Fine camo job, something was buzzing in the back of my head...see it yet? 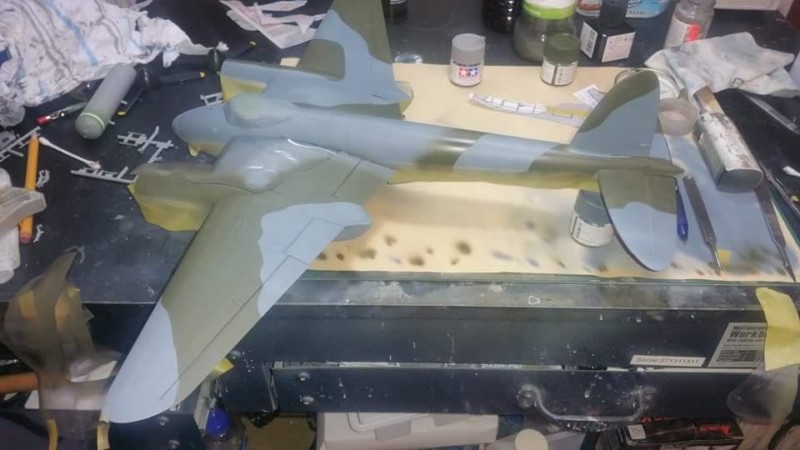 I used the Tamiya diagram for the FBVI! Which is a mirror image of the bomber scheme...
Soooooo...with the Dark green still loaded in the airbrush I finished covering the upper surfaces. After all was dry, I reapplied the masks and sprayed the Ocean gray again, no harm no foul, just Pay Attention! 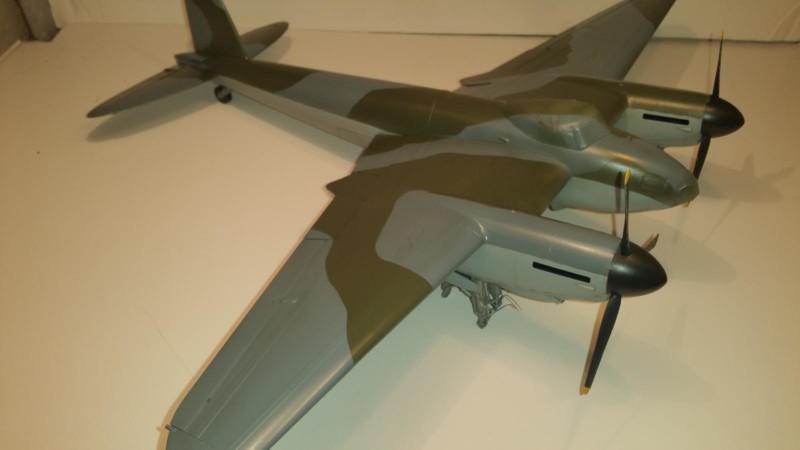 Just about all of the RAF line squadrons using the B MkXVI were camoflaged in the standard RAF Day bomber scheme, the OG/DG/Night were more prevalent on the MkIV/IX birds of the Night Light Strike Force. y first thought was to go ahead and do a LNSF bird in that scheme and gin up the markings, but after some thought I decided to go ahead and do Q "Queenie" of 128 Sq, RAF at Wyton in late 1944, as provided in the kit. The black-on-yellow codes and an iconic wartime photo of Queenie being loaded with a 4000lb Blockbuster was the deciding factor, and I wanted to see how the Cartograph-printed decals would work. I also got a set of Avialogy data decals for any missing data, just in case. 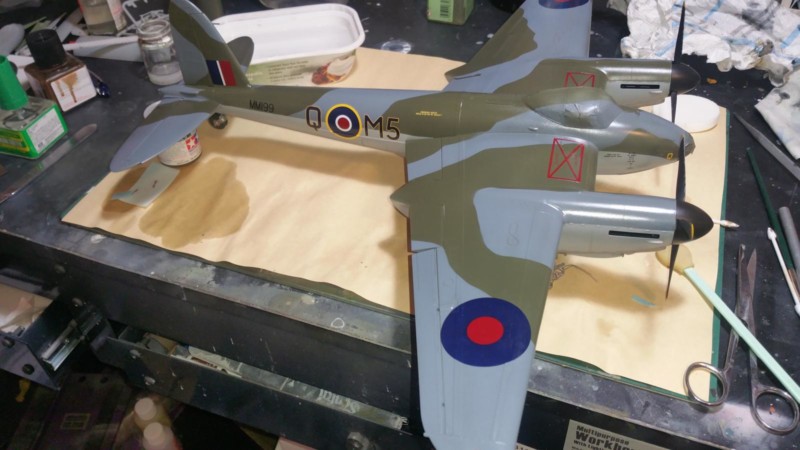 After a couple of coats of Future I was ready for the decals. The kit decals are beautiful, precisely printed and have almost no carrier film. Also, the decal set is complete with instruments and door warning placards.Mossies didn't have a whole lot of data covering the airframe anyway. They performed perfectly without any need for softening agents either, and the task was complete in less than an hour. 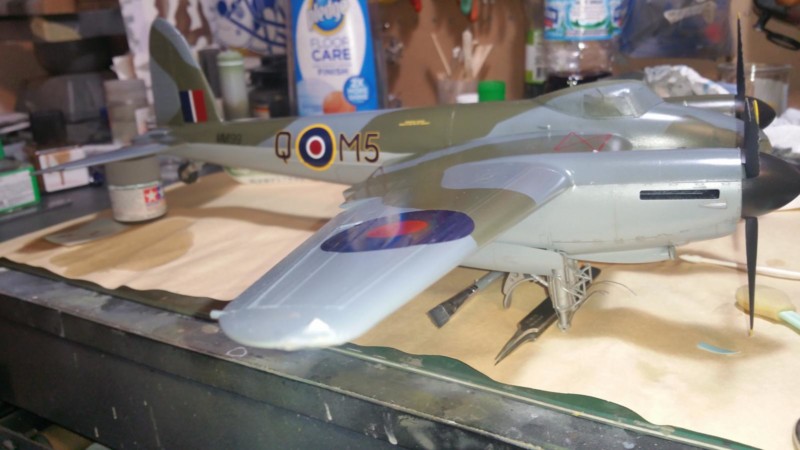 So far so good! Next up is highlighting the panel lines with a combination of Tamiya's brown panel liner and AK's Blue/Gray panel wash. As I was washing away I noticed that the panel details looked great with the coat of paint they had, a wash was almost too much in some cases. Kudo's to HK for how petit and refined the panel lines were done! I also did some panel fading and added some chipping to the paddle-bladed props, but in general I kept the weathering to a mimimum, mainly because I want to show the plane's clean lines, not my weathering skills.
After a flat coat using my custom mix of Future/Tamiya flat base for a semi-flat sheen, I removed the masking from all the transparencies and Man do they Pop! HK's clear parts are crystal clear. A small investment in Eduard's mask set well worth it! 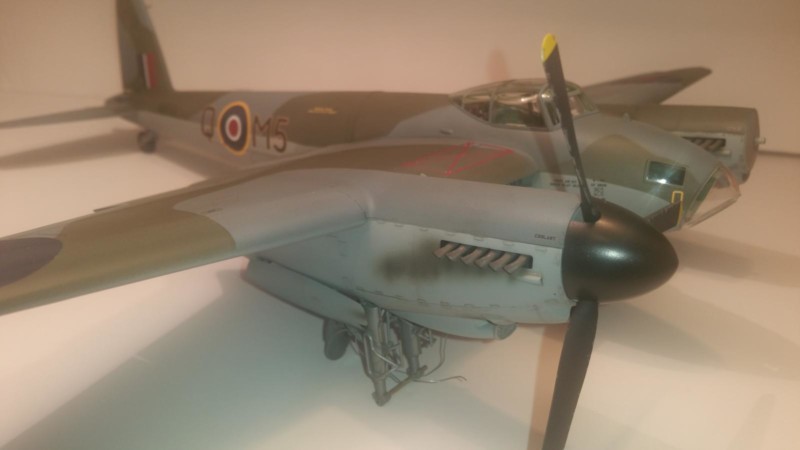 In the home stretch now, I mixed up a 50/50 mix of Tamiya nato black and red brown, heavily thinned, and added the exhaust smudges. I noticed from period photos that the open exhaust equiped Merlins the cowlings were not heavily sooted over. likely due to the Merlin being an upright V so oil wouldn't accumulate in the cylinder head and burn as heavily, unlike the inverted V Daimler Benz and Jumo engines, so I kept the exhaust a bit more subdued,I am pretty pleased with the effects.
Almost there! Next up is the addition of the wheels and assorted extra parts, and a general Reveal of the finished Mk16. Thanx for keeping up! 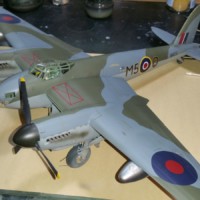 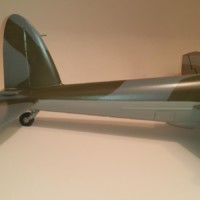 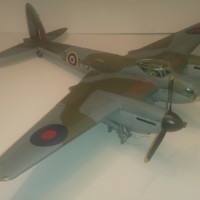 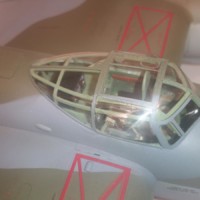 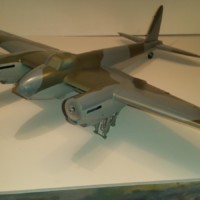 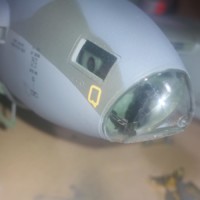 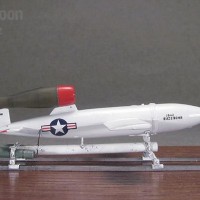 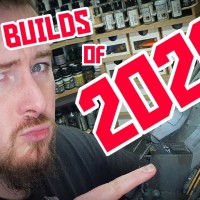 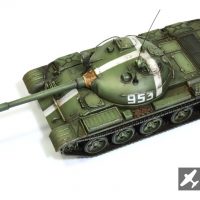 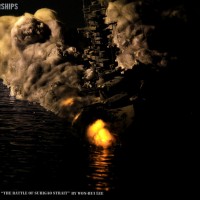