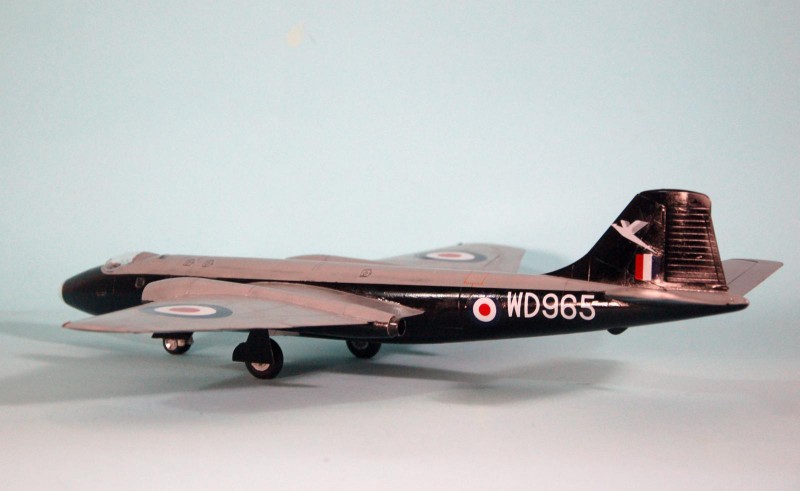 The English Electric Canberra was developed by English Electric in response to a 1944 Air Ministry requirement for a successor to the wartime de Havilland Mosquito fast-bomber. This requirement, the initial revision being E.3/45, sought a high altitude, high-speed bomber which was to be equipped with no defensive armament. When the Canberra was introduced to service with the Royal Air Force in May 1951, it was the service’s first jet-powered bomber aircraft.

Throughout most of the 1950s, the Canberra could fly at a higher altitude than any other bomber or even any other aircraft in the world. In 1957, a Canberra established a world altitude record of 70,310 feet. In February 1951, another Canberra set another world record when it became the first jet aircraft to make a non-stop transatlantic flight. Due to its ability to evade early jet interceptor aircraft and its significant performance advancement over contemporary piston-engined bombers, the Canberra became a popular aircraft on the export market, being procured for service in the air forces of many nations.

The first prototype, VN799, flew on 13 May 1949 with Roland Beamont at the controls.Flight testing of the prototypes proved to be problem-free and required only a few modifications to be made. The turbojet engines were replaced by the more powerful Rolls-Royce Avon R.A.3s. The Canberra handled much like a fighter, proving to be atypically maneuverable for a bomber. A firm order was placed for 132 Canberras, consisting of 90 B.5/47 bomber aircraft, 34 PR.31/46 photo reconnaissance aircraft, and 8 T.2/49 trainers.

The Canberra replaced Mosquitos, Lincolns and Washingtons as front line bombers, showing a drastically improved performance, and proving to be effectively immune from interception during air defence exercises until the arrival of the Hawker Hunter. The Canberra also replaced the RAF’s Mosquitos in the reconnaissance role, with the Canberra PR3 entering service in December 1952. The improved Canberra B6, with more powerful engines and a greater fuel capacity, started to supplement the B2s in Bomber Command from June 1954. This freed up older B2s to allow Canberra squadrons to form overseas, with bomber and reconnaissance Canberra wings forming in RAF Germany and on Cyprus, with squadrons also being deployed to the Far East.

The Canberra took first place in The Last Great Air Race from London to Christchurch in 1953. Piloted by Flight Lieutenant Roland (Monty) Burton, it touched down at Christchurch 41 minutes ahead of its closest rival, after 23 hours and 51 minutes in the air; to this day the record has never been broken.

The first Canberra kit I am aware of was the “box scale” Revell B-57 released in 1955. Frog did a Canberra in 1/72 scale in the late 50s, which was eventually replaced 10 years later with a kit that had landing gear and something passing for a cockpit. It was a B(I).8 as I recall. The first Canberra in 1/48 was a vacuform by Aeroclub. Classic Airframes released a limited-run injection-molded kit around 2003. This Airfix kit was released around 2008 as I recall.

The kit is thoroughly Old Airfix, with all the clunkiness that simplified design to meet the requirements of the bean counters running the company in the 1990s to around 2010. That said, it is easier to construct than the Classic Airframes kit and is dimensionally correct. The kit allows a modeler to do a Canberra B.2 of 10 Squadron RAF, an Australian B.20, a B62 flown by Argentina and an RAF B(I).6 interim night intruder.

This kit sat on the shelf of doom for around the past 10 years, til I rediscovered it and decided to finish it off. It had the Eduard photoetch cockpit detail set and Aires resin ejection seats. In truth, there was no reason to waste a minute’s work on the rear cockpit area, since it cannot be seen when finished. Staring through the thick clear plastic of the bubble, doing the cockpit as provided, with instrument panel decals, would have been as acceptable as the final result with the photo-etch. The one real improvement was putting the resin seat in the pilot’s position.

The Canberra needs a lot of nose weight to avoid tail-sitting. I filled the entire nose (since it was painted black there was nothing to be seen in there) and it still tail-sits with a finger tap on the table. Everything assembles easily, though I found I needed filler on all the seams. Interestingly, according to the decal placement drawings, the panel surface detail on the it is about half of what it should be.

The kit decals went on without problem under an application of Micro-Sol. I then gave it another coat of clear gloss.

I unmasked the clear parts, and attached the landing gear. It’s a good thing the main wheels come flattened, since I needed that to assist in nose-sitting.

I’ve always thought the Canberra was an elegant-looking airplane, and Airfix has caught that shape. Despite the kit’s overall clunkiness, the final result looks nice, though it’s also a reminder of how good New Airfix is over that which came before.

Another one off the Shelf of Doom, but it’s destined for a storage box, due to its size. I bet you didn’t think the Canberra was as big as a B-17, but it is.

Recommended for British aircraft fans since, aside from the CA short run version, it’s the only one out there in this scale. 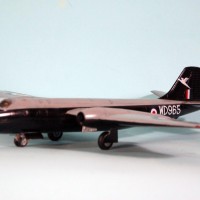 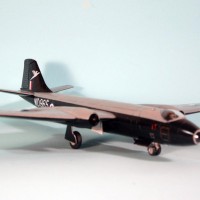 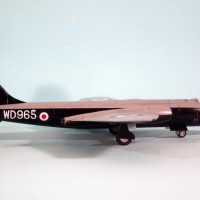 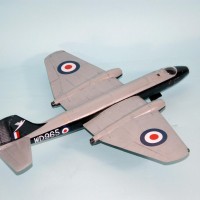 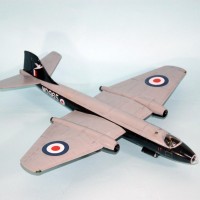 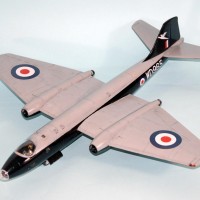 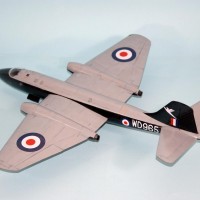 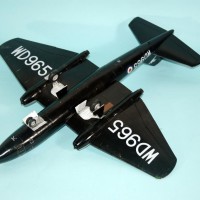 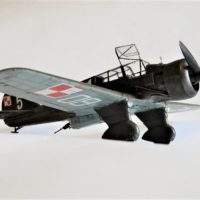 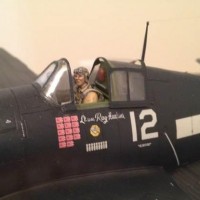 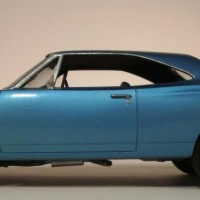 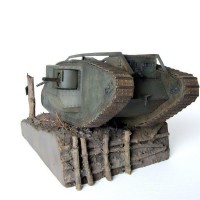