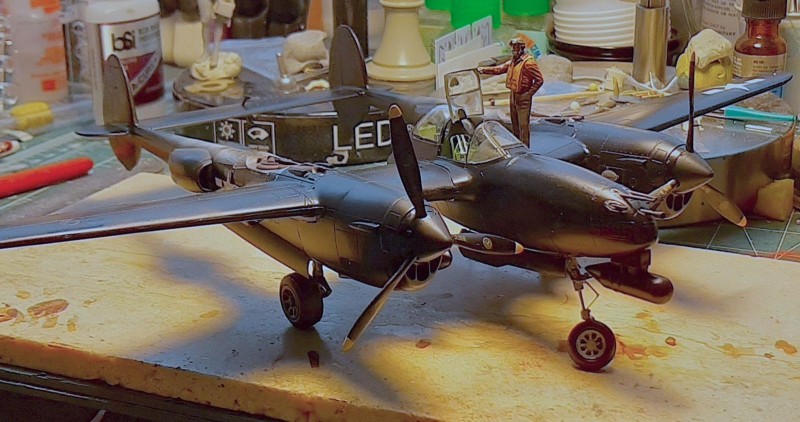 I am sure many of my fellow modelers took advantage of the sheltering in place situation to commemorate this historical event with a model project. I decided to use this time to check off my bucket list a model, that has languished for a number of years in the closet of someday I am going to build this model.

I have always liked the P-38M because it was different looking and it was black. Years ago I remember building the Monogram kit, and that it had a few fit and accuracy problems. So when Academy came out with their 48th scale offering with some nice box art, I decided to have another go at it.

Academy molded this kit in a high gloss black plastic, and it sure was tempting to try preserving it as the final finish, but once into the build, I decided against that and went with a semi-gloss finish instead.

While the kit was waiting to be built, it became a repository for after-market bits and pieces like resin wheels, seat with harness, metal gun barrels, open gun bays etc….well you understand how that goes. That doesn’t mean I will use everything that gets accumulated, of course, but it is there just in case.

The build went smoothly until I decided that I would re-work the nose gear to achieve the proper stance seen in photos. Apparently, this is caused when the nose gun ammo is absent, thus shifting the weight rearward and lifting the nose higher. My solution to this was using a paper clip to represent the hydraulic cylinder and allowing me to turn the front wheel. I know all about that front wheel being turned was not a good thing, but it looked interesting to me, so I indulged in some creative license. I had to scratch the scissors as well using sheet styrene. Photos showed a small landing light mounted on the front fork and was added using a LM lens.

The kit’s main landing gear wheels were rubber and appeared to look over-sized to me, so I used the resin wheels instead. However, I did use the kit nose wheel and rubber tire as it fit the yoke better than the resin one did.

The only real problem I had were the kit decals. They would not slide off the paper for some reason. This created a major problem because I could not use decals from other P-38s as all the stencil information and other numbers were all in red. I did locate a sheet from AeroMaster, but I was unable to find it on E-Bay or from friends. Finally, a friend sent me a set of decals from a Monogram kit and that solved the problem.

The last decision was to weather or not, and I decided to keep this one factory fresh. I used ModelMaster sem-gloss black enamel on the aircraft and their acryl paint on the figure. I really enjoyed this build a lot. 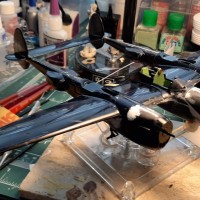 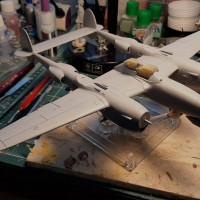 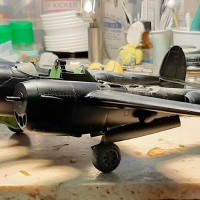 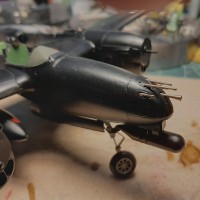 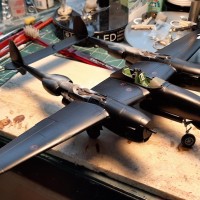 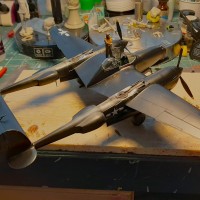 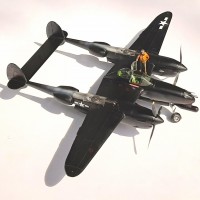 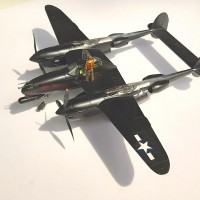 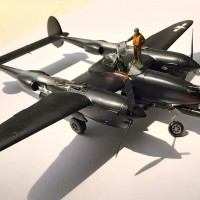 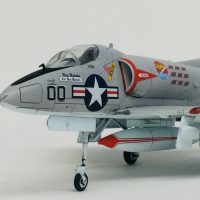 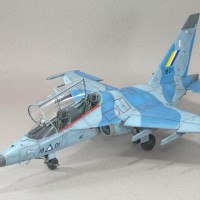 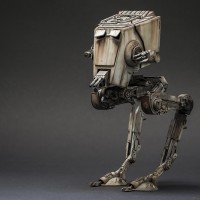 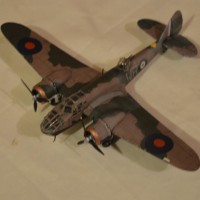