This kit is overall very nice but there are a lot of very fiddly bits that test the patience. In particular, the flap assembly and the exhaust assembly are a bit challenging since there are so many parts with little or not mating surfaces. The landing gear are also a big challenge since they are so frail. I replaced mine with Scale Aircraft Conversions metal landing gear but to be honest, they are very malleable and are also frail as a result. I wish Hobbyboss had provided for reinforcement of the landing gear with steel rod as featured in some Tamiya kits. I suppose I could have done that myself but I thought I’d be covered with the metal replacements. The worst problem with the landing gear though is the lack of sufficient mating surface. While photographing the model, I broke off each main gear while repositioning the model.

The fit of the kit ranges from pretty good to excellent I have no complaints there. The one exception is the pilot’s canopy. The closed version fits terribly and I didn’t think I could blend it effectively so I opted for the open version. The odd thing is that Hobbyboss does not include an open option for the rear cockpit. So I was left with one open and one closed which looks a little goofy.

One thing I like about the kit is the surface detail. The panel lines and rivets are very prominent. I feel they look good on this subject although I’m sure many will not agree. To each our own.

I used a variety of Alclad shades. On the main parts of the fuselage I masked off each panel and used Aluminum, White Aluminum and Semi-matt Aluminum. I am please with the outcome which subtlety alters the sheen and tint in a random way which seems realistic to me. To be honest, I would prefer to be able to replicate an oxidized and slightly scratched appearance I see in photos but I haven’t figured out how to do that yet.

In addition to the landing gear, I added Legend ejection seats and the Quickboost ventral fin.

I used, Helicon Focus which is a focus staking software, to blend several photos from each angle, each with a different focal point so that the entire image is in focus. I also used ambient light rather than flash since with metal finishes, I find flash creates a harsh effect. Of course, with ambient light, a tripod and a remote release are important to compensate for longer shutter times. The stacked images were further edited with Photoshop Lightroom.

I would only recommend this kit to someone with a fair amount of experience. I think this kit would be too frustrating for a beginner.

There’s no arguing though with the fact that the F-105 is a great looking jet so if you agree, I’d suggest you give it a try. 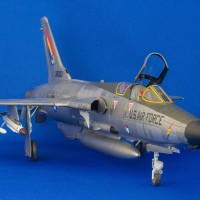 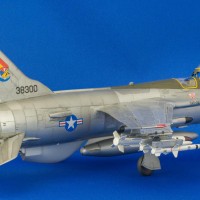 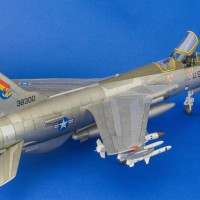 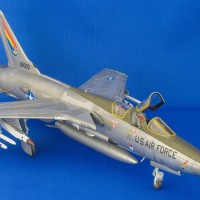 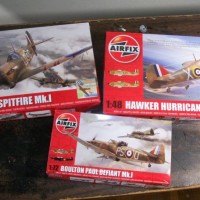 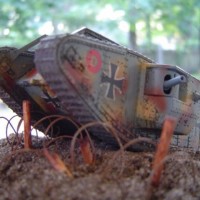 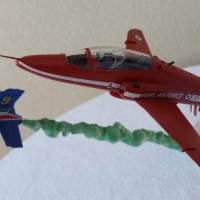 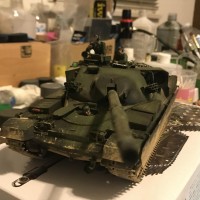