An "arrow" that was no longer shot: Do-335B-4 reconnaissance aircraft 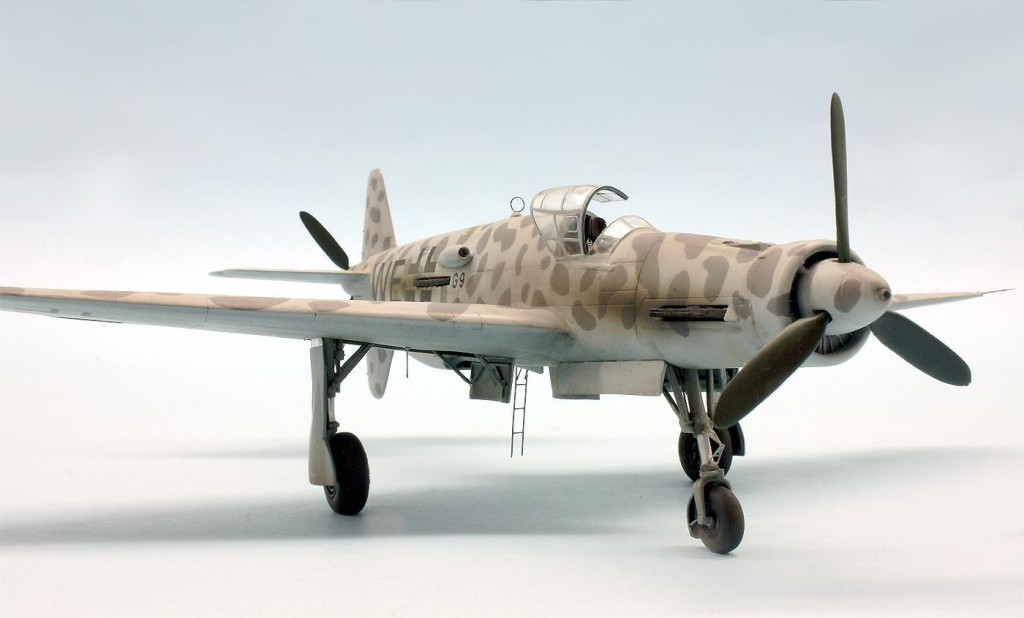 Fighter, fighter-bomber, reconnaissance plane, night fighter, high-altitude reconnaissance plane, "destroyer": since the beginning of 1943, truly far-reaching plans were being pursued with the Do-335 "Arrow"! With Dornier's ingenious design, the dream of a superior all-rounder finally seemed within reach. In the end, however, 28 pre-production aircraft and 11 models of the first A-series were built.

This was due not only to the increasingly oppressive restrictions imposed by the approaching end of the war, but also to the numerous technical difficulties that Dornier had encountered with this extremely ambitious design. Briefly, three problem areas are mentioned here with which the Do 335 had to contend throughout its development.

Firstly, the mechanics and stability of the nose wheel, a concept that was still unusual in Europe and considered "American", caused constant difficulties. On the other hand, the ejection seat was completely new territory. Three manufacturers competed with their own designs, which, incidentally, were not powered by rockets, as is common today, but by compressed air or propellant charges. Heinkel and Focke-Wulf used ejection seats with 14g and 18g top speed, respectively, while Dornier preferred a proprietary development in which the ejection was up to 25g. However, this proved to be life-threatening and resulted in massive injuries.

In the case of the Do-335, the complex emergency ejection procedure also included the jettisoning of the upper tail fin as well as the tail propeller; which was probably a relief for the pilot from a purely psychological point of view.

Thirdly, the Do-335 had to contend with challenges that were typical of all designs with engines installed in the centre of the fuselage: Engine overheating and problems with power transmission through a remote shaft. This led from the rear engine, which was installed close to the centre of gravity, to the pusher propeller in the rear and had the considerable length of three metres. Another point of criticism was the poor visibility of the pilot.

The testing of the futuristic Do-335 was carried out by the Erprobungskommando 335 in Rechlin. The unit, established in September 1944, flew mainly pre-production aircraft of the A-0 series. These examples, fully armed and equipped, gave a realistic impression of what could be expected from the machines that were to come from the planned large-scale production - and that, despite all the difficulties, was above all a good thing from the German point of view!

The innovative design ensured the Do-335 superior performance in many areas: with the engines in tandem arrangement, the power of two engines could be brought to bear, whereby aerodynamically only the price for the cross-section of one engine had to be paid. This arrangement also ensured that if one engine was selected, there would be no need to compensate for a pull about the vertical axis.

The potential of the Do-335 was enormous. The two DB 603E engines accelerated the 9600kg machine to 775 km/h; the "Arrow" became the fastest series-produced propeller machine in history. Internally, a drop load of 500 kilograms could be carried or a corresponding amount of additional fuel. The range thus increased to a remarkable 1800 kilometres. The external dimensions of the Do 335 were also in a class of their own: with a length of 13.80 m and a wingspan of 13.82 m, there was a huge amount of aircraft in its place, especially when you consider its height of 5 metres!

The Do 335 shown here in the B-4 version was planned as a reconnaissance aircraft. With new wings extended to 18.4m span and low aspect ratio, it would have had even better altitude performance. In addition, two DB 603LA with two-stage superchargers and 2000hp each were to provide even more power for the two propellers. Except for the wings and engine, the planned Do-335 B-4 corresponded to an A-4. This reconnaissance plane was never built, so the aircraft shown here is pure fiction.

The model and the building process
The kit used here is a variant developed in 2007 of the Dragon moulds that first appeared in 1992. By the way: the manufacturer had already tried with a B-6, i.e. a night fighter, earlier with a fictitious Do-335.

As is so often the case, there are both light and dark sides here - and often they are close to each other. The parts construction seems logical and not overcomplicated to me, and I also remember the accuracy of fit as generally good. However, at least by today's standards, one would expect a little more detail in the cockpit or in the undercarriage area. Fortunately I was able to use an etched part set from the manufacturer "Part" for both areas. In the cockpit I used metal from Eduard: the harnesses as well as the (heavily modified) instrument panel were taken from a board originally intended for an Fw 190.

A big challenge for me was the creation of the Fleck camouflage; more precisely, one should even say: it was the reason to accurately build this model now! Shortly before, I had tried out a method of applying such kidney- or circle-like camouflage patches with self-cut stencils in a Bf 109 project. The colour of the darker spots is applied first, then masked with the small stencils cut from Tamiya tape, and then sprayed over with the lighter colour. After removing the masking, nice and clear camouflage spots appear - if everything went well!

With this building project, it was extremely exciting for me to see whether I could also implement this approach on a small scale with a satisfactory result. I show you the pictures of some of the templates I used and, as a testimony to my work, of course the finished model itself.

A really welcome detail of the kit is the enclosed etched part board for the entrance ladder. In the model, this provided a way to access the wings, which are at a considerable height, and thus also the cockpit. In the original as well as in scale, the relative daintiness of this ladder, which can be stowed in the fuselage when folded, illustrates the enormous, even frightening size of a Do-335!

For me, this experience-rich build was the prelude to a closer examination of the fascinating subject of the Do-335. I will draw the next three "arrows" from the quiver, which Tamiya has stocked very well with justifiably famous Do-335 kits in 1/48th scale. Dragon's kit in 1/72nd scale does not have to hide behind these "big brothers" and scores with the fact that exotic variants of this already unusual aircraft are also possible! 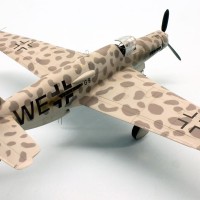 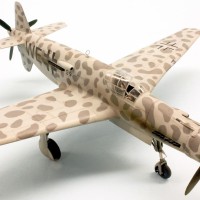 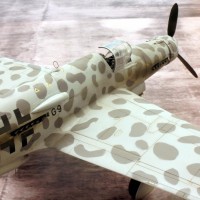 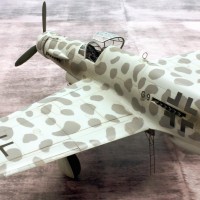 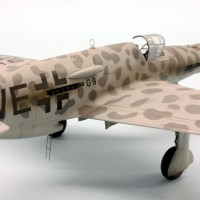 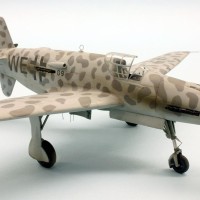 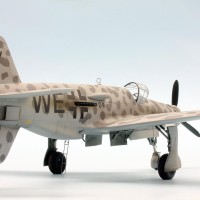 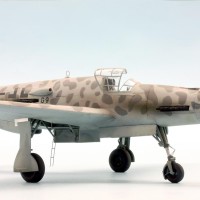 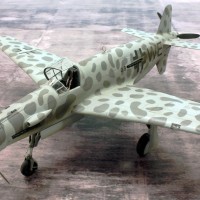 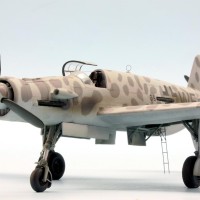 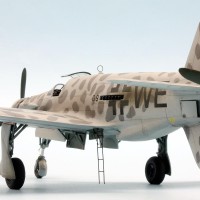 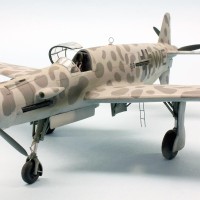 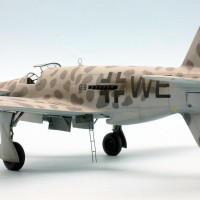 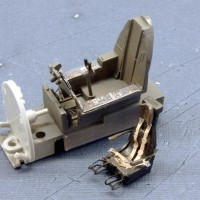 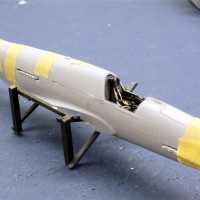 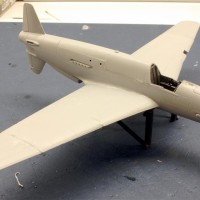 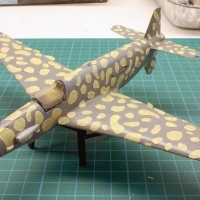 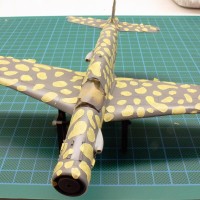 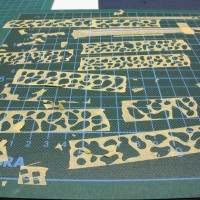 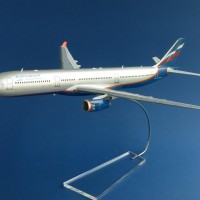 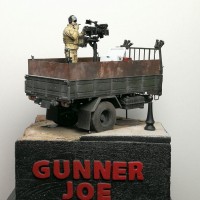 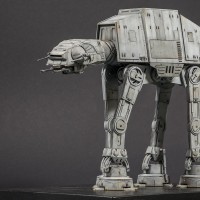 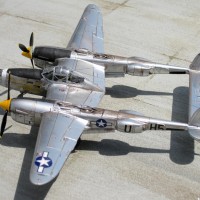