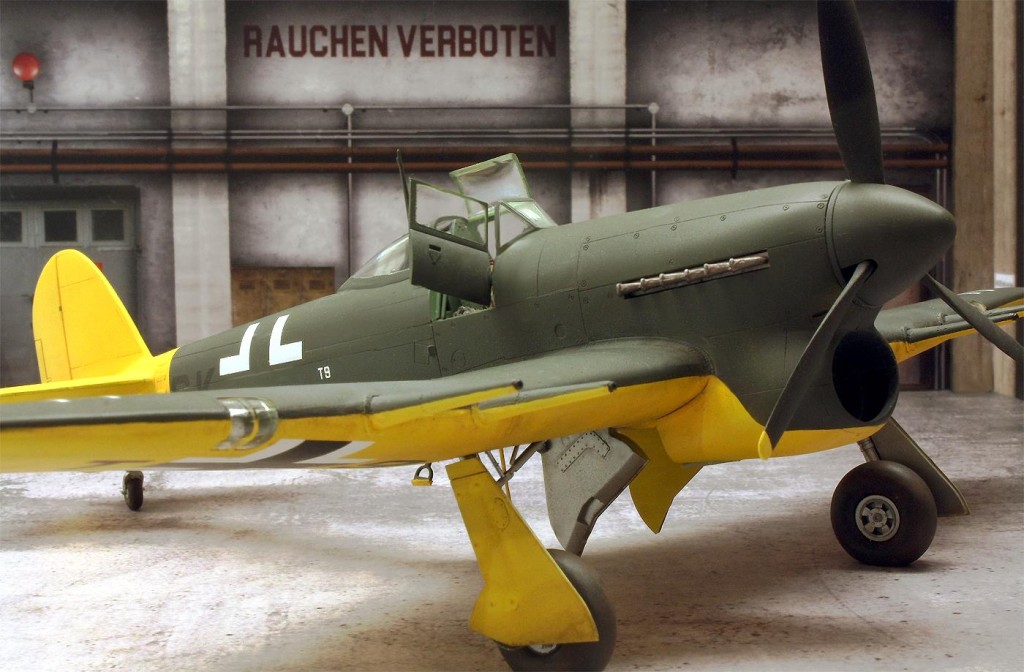 "If you know yourself and your enemy, you need not fear the outcome of 100 battles".
Well, what model building article can you begin, as here, with the quote of an ancient Chinese philosopher? In the case of this Hawker Typhoon Ib of the "Wanderzirkus Rosarius" this is indeed appropriate! Sun Tsi, ancient Chinese philosopher and military strategist, placed great emphasis on knowledge of the enemy as one of the most valuable resources in war in his work "The Art of War" and put this in the formula given at the beginning.

About Hawker Typhoon T9+GK / 2nd Squadron Versuchsverband Ob.d.L
The Hawker Typhoon Ib shown here in the colours of the "2. Staffel des Versuchsverbands Oberbefehlshaber der Luftwaffe" (2nd Squadron of the Versuchsverband Oberbefehlshaber der Luftwaffe) is a modern application of this insight, as this unit had a truly unique task: captured enemy aircraft were to be made known to their own pilots and demonstrated. The unit toured to various operational units; a veritable "travelling circus" whose flying arsenal included a colourful mixture of the latest enemy designs.

Following the principle of "know your enemy", they tried to illustrate the strengths and weaknesses of the enemy patterns in order to be able to adapt their own tactics to them. Not only training and supplementary units were visited, but also regular task forces. The unit under the command of Captain Theodor Rosarius usually appeared with five or six captured aircraft.

Following the principle of "know your enemy", they tried to visualise the strengths and weaknesses of the enemy's patterns in order to be able to adjust their own tactics accordingly. Not only training and supplementary units were visited, but also regular task forces. The unit under the command of Captain Theodor Rosarius usually appeared with five or six prey aircraft.

The very history of this unit is unusual: the idea of flying loot planes in front of their own frontline pilots had a prominent supporter: in 1943, the 2nd Squadron of the Versuchsverband Ob.d.L. was set up at the sustained instigation of Adolf Galland. Initially based in Oranienburg near Berlin, the 2nd Squadron moved to the safer Göttingen from 1944. The actual flight testing and technical evaluation of the unknown enemy aircraft took place at the Rechlin test site. The 2nd Squadron Versuchsverband Ob.d.L. was responsible for organising and conducting pilot training, naturally in close technical coordination with Rechlin.

The aircraft pool of the unit, soon known as the "Wanderzirkus Rosarius" after its commander, gradually accumulated a collection of highly diverse Allied aircraft, including P-51s, Spitfires, P-38 Lightnings, B-24 Liberators, B-17s and D.H. 98 Mosquitoes. Two Hawker Typhoons were also taken over: in the spring of 1943 a Mk. Ia /EJ956, formerly flying with 486 (NZ) Squadron, and a Mk. Ib with the registration JP548. This is the Typhoon shown here.

This aircraft had been in operation with 174th Squadron until February 1944, when it was inspected and repaired by the Germans after a crash landing in occupied France. After a brief evaluation in Rechlin, it entered the inventory of the experimental unit, where, however, as will be described, it was not to be flown for long, just like the first Typhoon.

The back story can be briefly told: on 22 February, the Hawker Typhoon EJ956 had to make an emergency landing near Matigny, France, during a "Rhubarb" mission with engine failure. The pilot, F/O Proddow, was able to avoid capture and was to return to England a short time later with the help of the Resistance.

A second German pilot was less fortunate. The records of the 2nd Squadron of the Versuchsverband Ob.d.L. state: "The crash occurred on 28 July 1944 near Meckelfeld, 5 km SE of Harburg, south of Hamburg". The pilot of the captured Typhoon, Fw. Herbert Gold, was killed in the crash. Flying unknown prize aircraft was and remained a high-risk business.

Both Hawker Typhoons of the "Wanderzirkus Rosarius" carried the same markings "T9+GK", with the first two digits identifying the 2nd Squadron of the Versuchsverband Ob.d.L.. Opinions differ on the reconstruction of the colour scheme, although the yellow RLM4 for the underside is undisputed. For my illustration here I have chosen the most probable appearance. The upper side is painted in RLM 70, although RLM 71 would also be possible. Confusion arises in this context with the first captured Typhoon from 1943: the original green/grey British colours on the upper side were probably left and supplemented with similar colours, only the underside was repainted in the characteristic yellow of the "Circus Rosarius". Since both machines carried the same markings, there is a high risk of confusion.

About the kit and the building process
The moulds of Hasegawa's well-known and beautiful kit date back to 1999, which, for all its timeless quality, suggests a few additions according to today's standards. From Eduard there is a quite useful etched parts set for the bubbletop version, which can also be used here for the earlier car-door version.

The improvement achieved by these etched parts is particularly striking on the Typhoon's prominent chin radiator. On the original there was an amazing range of possible designs for the radiator system, but even against this background I found the appearance of the Hasegawa parts not too convincing. The opportunity to build a new oil cooler from etched parts was therefore very welcome to me.

The machine gun fairings were also replaced; here the kit parts appear far too washed out, which probably wouldn't have been helped much by the unavoidable reaming of the barrel muzzles. Fortunately, a set of impressive metal barrels from "Master" was at hand. The parts were also refined by drilling out the exhaust pipes as well as the representation of the position lights by hardened "Crystall-Clear". This is a method that I now consistently prefer to the installation of the corresponding fiddly clear kit parts.

The decals for this extraordinary Typhoon come from the decal sheet "Circus Rosarius. Special Mission 3" from Cutting Edge. The few decals could be processed without any problems and with satisfactory results.

The occupation with the topic "captured aircraft" leads to really exciting stories! Even if I already knew the history of the "Circus Rosarius" in broad outlines, you learn something amazing from the concrete example. So at the end of this project, I am not only happy about a really unusual aircraft model in the display case, but also about new insights into the history of aviation. 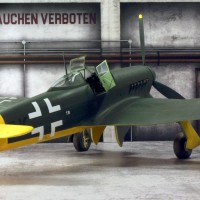 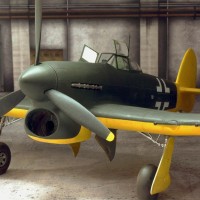 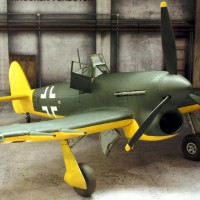 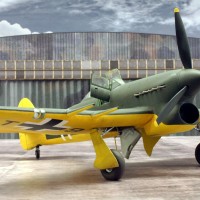 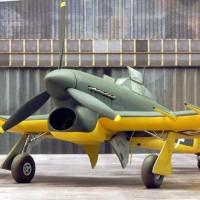 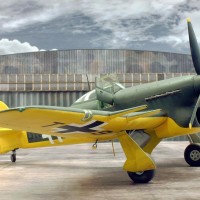 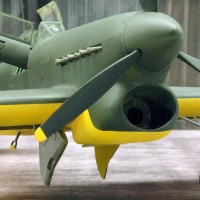 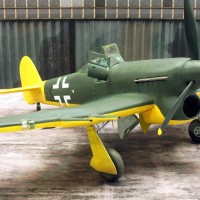 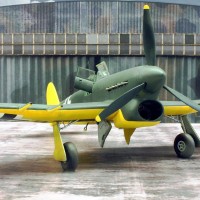 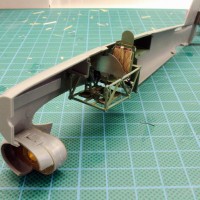 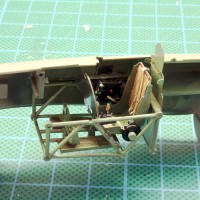 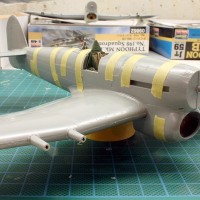 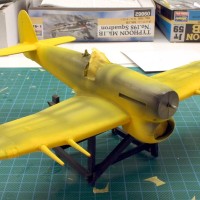 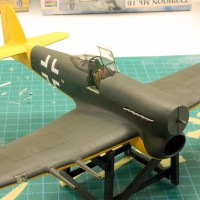 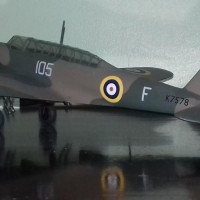 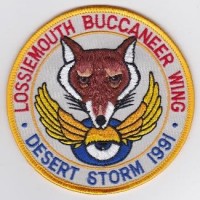 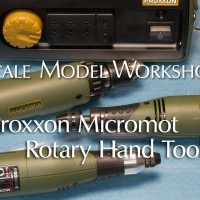 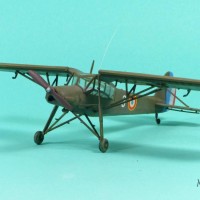