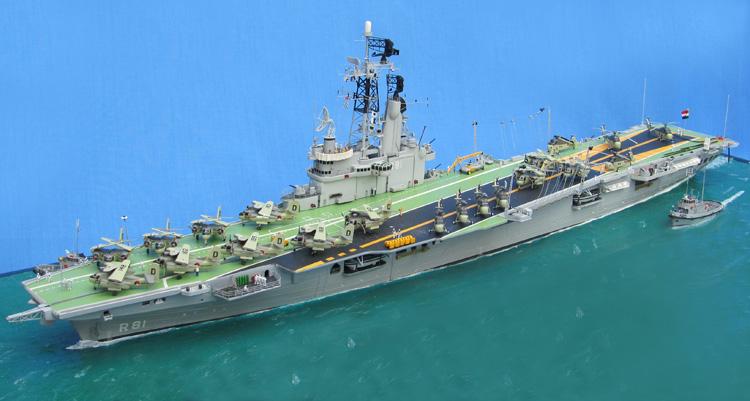 Air Group 1958-1962 Grumman Avengers, Hawker Siddely Sea Hawk-Sikorsky HO4-S3 (S55)
Air group 1962-1968 Grumman S-2A Tracker- Sikorsky HSS-1N Seabat
With only anti-submarine Trackers and Helicopters, the carrier became a Carrier Vessel Submarines (CVS).
The carrier took part in many NATO exercises and was mainly operational in the Atlantic, Mediterranean and the Caribbean waters.
One exception was a “Show the Flag“ world deployment in 1960, lasting 7 months.
In 1968, she was severely damaged by a major fire in the engine room and subsequently sold to Argentina.

“ARA 25 de Mayo”
In service: 1 September 1969.
That same year refit took place at the Wilton Feijenoord Shipyard. On her maiden trip to Argentina, the ship had her first encounter with the prototype of the British Sea Harrier, landing on her deck for a possible (ordering) interest from the Argentine Navy Officials.
During the Falkland War (1982) the carrier was flagship of Carrier Task Force (CTF 79 /01-03 may 1982) and was indeed ordered by the Naval High Command to attack the British carrier battle group, after this was detected by Grumman Trackers, operating from the carrier. Due to the fact, that a night strike was not possible by the A-4Q Skyhawk, and knowing to be detected, the British battle group moved to the east and out of range from the Argentines.
In th year 1999/2000 the carrier was towed to Alang (India) to be scrapped.

Combination of Heller (Arromanches) plastic kit, enhanced with a resin, etch and decal set by http://www.navalmodels.com The enhancement set makes it possible to construct the carrier after the major refit. (Angled deck, new island, and new radar suite.)
Construction:
This multimedia kit needs a lot of TLC, especially connecting the resin to the plastic over large areas. A large etch set with radars, main mast, propellers, rotor blades, tail rotors, everything is included. Basically, the same items that were used during the real major refit
Length in centimeter 56 / Width in centimeters 8+.

The model is built full hull and placed in a wooden casing. This casing is then filled with molding powder and left alone for shrinking. After the water is dampened out of the powder, the difference (3mm) is then filled with liquitex gel and sculptured with a little spoon. This gel hardens out after 24 hours. Then it is studying the water pictures, to make the final choice on the colors.

The Diorama dated 03 November 1967:
In October 1967, the Dutch Navy concentrated a Task Force that included eleven ships, including the carrier, destroyers, frigates, submarines, tanker and Fleet Air Arm assets.
On the 3rd of November, the Karel Doorman entered the Naval Base of Toulon.
By arrival, two French Naval Tugboats are assisting the carrier to its anchorage. The carriers’ air group, consisting out of Squadron 4 and 8, are in full force (show the flag) ranged on the deck.
Starboard and Port anchor are both “presented” and ready to fall in case of emergency or during the coming anchoring procedure.
Lockheed Neptune (SP-2H/214) from Squadron 320 is making a low fly-past over the rear deck of the carrier.
(The Neptune is connected to the inside of the dustcover )

Kit and Accessories:
The complete kit is from http://www.navalmodels.com
Grumman Trackers are from Larsenal (www.larsenal.com)
French naval harbor tugs (Acharné Class)are from Larsenal
Winches, watertight doors, firefighting reels, from Larsenal
Crew is from North Star, via Larsenal
Lockheed Neptune is from Larsenal
Railing is from Tauro (www.tauro.com)
Scratch built. 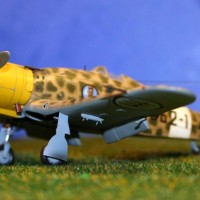 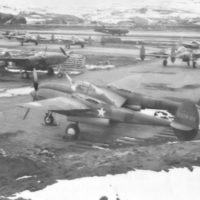 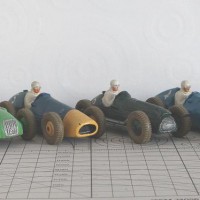 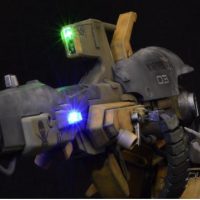