https://youtu.be/lNlqLIGhKK8
Ens George Gay didn't get much sleep the night of June 3rd, knowing what he was about to do in the morning. Reports were coming in from the P-boats (PBY Catalinas) of what has transpired the previous day and during the night. It would be their first actual combat mission with a torpedo. It would be the first time that most of the boot pilots which he was one would actually take off from the carrier with a torpedo on board their aircraft. Amazing not one training flight with a live torpedo on board for practice. 15 Devastators were loaded and ready. Cdr Waldron the Co of VT-8 would lead the flight to the Japanese fleet. 8 Avengers from Midway and also from VT-8 would also partake,
https://i1.wp.com/www.defensemedianetwork.com/wp-content/uploads/2012/06/Ens.-George-Gay-and-Field.jpg?resize=720%2C528
A very compelling article from Defense Media Network in which they interview LT. George Gay as he retells the story of his squadrons fate that day. It will tell the story much better than I can.
http://www.defensemedianetwork.com/stories/midway-the-sole-survivor-of-torpedo-squadron-8/

The model, Monograms classic Devastator in the white box. It was fun to build, by following Louis Gardner's build of his TBD-1, it helped me out by knowing what challenges to expect when building her. And his advise were spot on. I used Polly Scale USN Blue Grey over Aeromaster AN602 Lt Grey both acrylics. Small Testor bottle of Interior Green lightened with yellow to make it more of a Chromate Green. I also used Eduards PE detail set which is actually for the Great Wall kit to enhance a really decent detailed cockpit that Monogram provided itself. I used the dual .30 cal gun from the AM Dauntless kit for the rear gunner. Eagle Strike decal set #48-162 provided the decals for Ens. Gay's Devastator as it appeared at the time of Midway. Squadron/True Details for the resin wheels. And used for the first time the Montex canopy mask set which worked well for this kit. As the Devastators had been at sea for some time, they were well worn in appearance. In hoping to capture the fading, spot painting I used the Blue Grey straight out of the bottle, and then lightened it with Lt Aircraft Grey (the grey used under SEA schemes). I will show a couple of images with the wings unfolded to show the full affect of the scheme before folding them permanently. For a kit that first appeared in the early 70's I was pleasantly surprised how clear and crisp the clear parts were in this kit. It's a wonder that I didn't build one back then, as I was building Monogram kits like crazy, for some reason not this one. At this time I want to thank once again Martin for giving us a amazing site, Louis Gardner for organizing and moderating this Group Build, his encouragement to everyone who participated. And all those who contributed with their builds, research and input. And also praise and honor to the Men who fought at Midway. Japan and the United States, it was a pivotal battle for both nations. But also for the allies who needed the boost in the Pacific that turned the tide. Here is the link for the Wip.
http://imodeler.com/groups/75th-anniversary-battle-of-midway-group-build/forum/topic/monogram-148-devastator-tbd-1-usn-vt-8-ens-george-gay-uss-hornet-cv-8/ 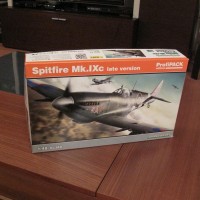 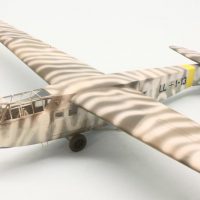 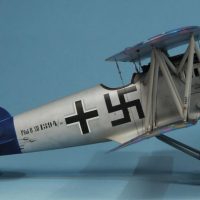 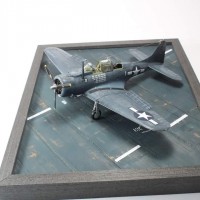