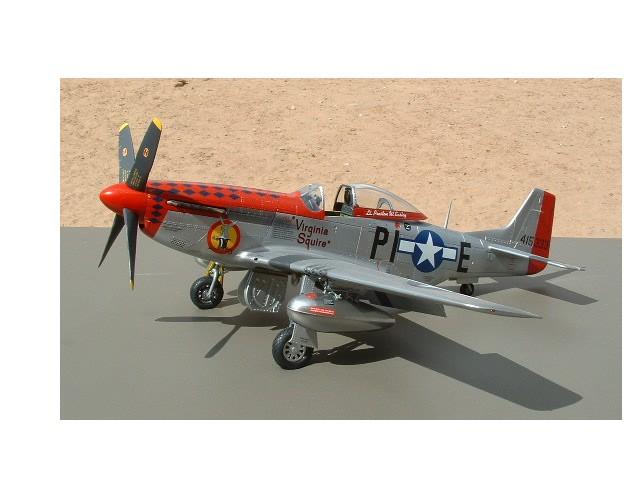 This P-51 represents another one of those unsung heroes of WW2, Lt (later Capt) Preston Easley. A West Point graduate, he flew 57 missions in Europe in both P-47’s and P-51’s, and finished the war with a DFC and 5 Air Medals, and went on to a successful career in both the USAF and in the aerospace industry. Not one of the flashiest or most well known personalities of the Air Force, but a highly respected leader who served his country with great honor and courage without a lot of fanfare.

Much has been written about Dragon’s 1/32 P-51, and most of it…well, let’s just say the kit wasn’t well liked. My recent post about their Me bf110 generated some interesting commentary about This kit so I figured the time was right to go ahead and publish this one, which I completed way back in 2007…and Yes, this kit deserves all the c**p thrown at it on all the forums.

Seeing the first pics of this kit on the I-net, all seemed well, so what’s wrong with it?
I went ahead and bought it basically sight unseen, just as the previews and reviews were starting to heat up. Not being either really well off or getting kits sent to me for free I wasn’t going to just trash it, so I pressed on.
So what Is wrong?…

The exterior surfaces should simply not be a mass of rivets and trench-like panel lines.
The cockpit floor is too narrow and has to be shimmed to fit.
The gear wells are wrong, just like everybody before them, they boxed the wells in along the door edge.
Missing retraction struts for the inner doors.
Ridiculously complicated multipart main gear struts, requiring carefull measurements to get both gears to match in extension, and to make matters worse, misnumbered parts on the instruction sheet.
Missing underwing pitot tube
Main wheels that at first look the part but if assembled as per the instructions, the rubber will stretch leaving a very unsightly gap between the mag and the tire
Oddly shaped prop blades, you can’t tell which way is the front and back of the blade
No positive attachment of the main gear to the wings, so no positive way to set the correct rack angle of the gear.
Missing drop tank plumbing

Sigh. I don’t think I have to go on, you get the idea.

So, yea I pressed on, checking and double checking my work as I progressed. In spite of all the issues the kit itself builds ok, its just not correct, given all the info that has been available for DECADES on the MOST FAMOUS AMERICAN FIGHTER OF WW2…

So to make a long story short I used Gunze Sanyo Mr Surfacer to try and make the wings more presentable, corrected what I could correct, added what needed to be added, including the rear radar warning antenna that this particular plane had installed. As for the wheel/tire issue, I carefully sliced the tirel and superglued it to the wheel, and cleaned up the gap as best I could.

To finish, I used Alclad’s aluminum shades on the fuselage, Floquil’s old Old Silver for the wings and various Testors MM enamels for the rest of the colors. To simulate some wear on the wing, I gently sanded thru the walkway black. For the drop tanks I used Alclad’s Polished silver over gloss black, and I have used that tecnique ever since, I was so pleased with the result. I had MicroScale’s decal set with this plane featured, and was very pleased with how well they performed. What’s not to like?! I loved the Blue Diamond pattern over the vivid red, which yielded the typically flashy 8th AF Fighter and a dash of color to my growing Large Scale collection!

So in conclusion, although this kit was at the time of it’s release a state-of-the-art POS, long surpassed by Tamiya’s superlative effort, I was relieved to be able to complete it and not have it looking quite as bad as something I scraped off the bottom of my Nike’s 😉

Thanx for looking, and as usual all comments are welcome! 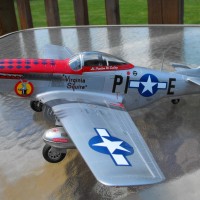 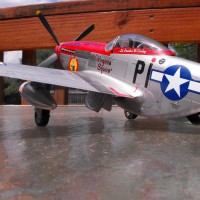 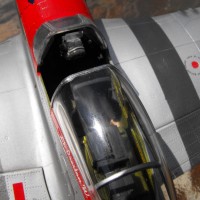 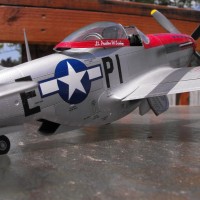 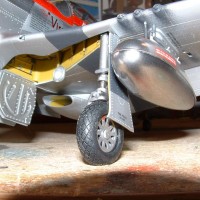 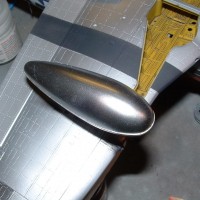 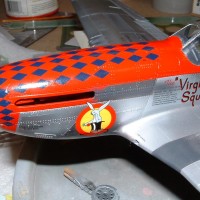 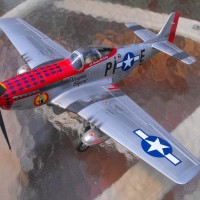 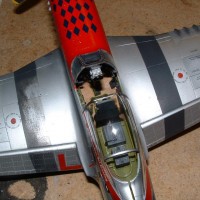 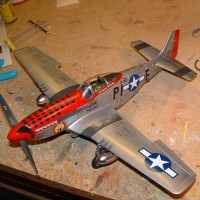 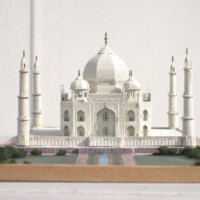 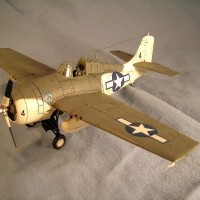 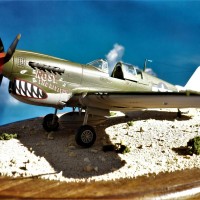 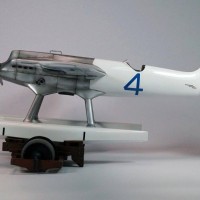