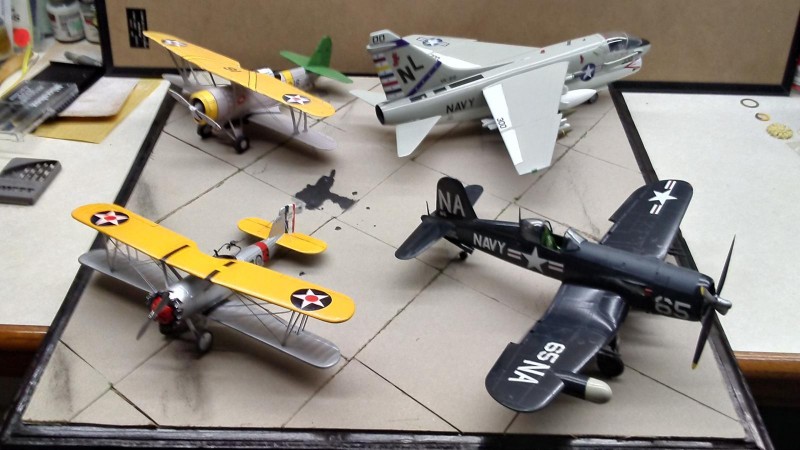 I suspect that most people who build model airplanes are very familiar with the famous Vought F4U Corsair fighter from WWII and Korea. Likewise, many are familiar with the A7 Corsair II which served the US Navy and later the Air National Guard from 1965 through 1993. While I was doing research into the history of dive bombing, I discovered there were actually a couple of other aircraft that carried the name of Corsair, so I determined to add those to my dive bomber collection, as well as build the whole set of Corsairs in 1/48 scale. This article is a result of that effort.

The first on the list is the Vought O2U/O3U Corsair. It was delivered to the US Navy and Marines from 1927 through 1936. It had a tube steel fuselage structure and a wooden wing structure with fabric covering. Four speed and altitude records were set with this aircraft in the 1927-1928 time-frame.When the Navy first began experimenting with the concept of dive-bombing in the late 20's, they strapped bombs onto pretty much every aircraft in the inventory, and it was discovered that only the Vought O2U and the Boeing F4B were capable of diving with a 500 lb. bomb load. Through this experimentation, the Navy concluded in 1927 that general purpose aircraft were a waste of money, even if they looked cheaper in theory. As a result, dive bomber, torpedo bomber and fighter were the three recommended types to concentrate on developing. In the 1928 Nicaraguan campaign (one of several "banana wars" the US was involved in in the early 1900's), Lt. Frank Schilt, USMC, won the Medal of Honor while flying the new Corsair. He landed his plane on the street of a town called Quilali, under fire, ten times to bring in supplies and evacuate wounded Marines. The O2U was featured in the original "King Kong" movie, along with the Curtiss F8C. 141 O2U's were still serving with the Navy when the US entered WWII.

Next is the Vought SBU Corsair, which is often overlooked in the history of the Corsair-named aircraft. Entering service in 1935, this aircraft was the first to be dubbed 'SB' for the new specialized Scout Bomber role, and carried a 500 lb bomb load. It was based on the XF3U two-seat fighter which Vought was developing, but which the Navy didn't want. Retooled into the XSBU-1, it was the first aircraft of its type to exceed 200 mph, had a controllable pitch propeller, NACA engine cowling and fully enclosed cockpit, all of which became standard for aircraft that followed. The SBU was relegated to training duties within 1 year, and was retired from service in 1941. The more-well known - and more modern - Vought SB2U Vindicator came into service already by 1936.

The F4U Corsair served from 1942 until final delivery to French forces in 1953. It was the first single-engine fighter to fly faster than 400 mph in level flight. The aircraft incorporated advanced spot-welded aluminum panels that eliminated rivets, while at the same time having fabric-covered sections of the wings - the last American-produced fighter to do so. The -4 was the last model to see action in WWII, and could carry bomb load of 4,000 lbs., comparable to standard load of a B-17 on long-range mission over Europe. Within the space of 20 years, the evolution of fighter to fighter-bomber, to specialized bomber, had come full circle back to fighters with bombs strapped on them, and Vought Corsairs figured prominently in that story.

The Ling-Temco-Vought A7 Corsair II entered service in 1967 and began operations in Vietnam late that year. Two squadrons of Navy A7's were still in use during Operation Desert Storm in 1990. Developed as a light ground-attack aircraft to replace the Navy's first jet, the A4 Skyhawk, it had a maximum bomb load of 15,000 lbs. The last US Corsairs retired from service in the National Guard in 1993. Pilots quipped that the Corsair was "not very fast, but is sure was slow".

My O2U is the Vac Wings vacuform kit, which is the only one available in 1/48 scale. This particular kit came without any of the resin or cast additions, so I had to do lots of extra scrounging. I used Ultracast SBD seats for the pilot and gunner. The resin engine is by Vector. Windscreen and propeller are from a Lindburg Stearman kit. Oversized wheels, Scarff ring, bomb racks and cockpit details all came from a Roden DH9 model kit. Wings struts were fabricated from aluminum tubing hammered flat. Landing gear struts are copper tubing hammered flat. I strung the rigging with combination of fine EZ Line and 20 lb. test fishing line. This is just my second vacuform kit, and the wings and fuselage all went together easily enough (with lots of sanding) - but getting those struts in place was a nightmare! I don't plan on EVER doing another vacuform biplane! My model represents Lt. Frank Schilt's aircraft from the Nicaragua campaign, the decals for which were provided with the kit.

Since no one makes a molded plastic 1/48 scale SBU (as far as I know), my example is a paper airplane put out by Kampfflieger. It comes as a downloadable pdf, printed out on card stock. I had to print it at 105% in order to get it properly to scale. Paper airplanes take a whole different skill set to do well, and I actually built this one 4 times to get the example shown here. The only modifications I made were to use a plastic bomb rather than the paper one supplied, and to string the rigging with 20lb. fishing line. My example represents Scouting Squadron Forty-Two in the summer of 1937.

My F4U is the magnificent Monogram Pro-Modeler F4U-5N, built OOB several years ago. I don't recall what squadron it represents, nor any details of the build. It's just a nice looking Corsair! The fact it turned out so well is testimony to the quality of the kit more than my modelling ability.

My A7E is an older Revell kit that I just recently finished. The kit has raised panel lines, poor fit, not much detail (molded in arrestor hook? really?) and lots of flash. The forward fuselage appears too wide. In addition to that, my second-hand kit was missing an elevator, so I had to scratch-build one from sheet styrene. The kit is OOB except for substituting aluminum rod for the molded cannon barrels. If you want to build a nice A7 I would not recommend this kit! However, after all is said and done, I really, really like having this model as part of my collection as my one and only jet aircraft. This example represents VA-22 on the USS Kitty Hawk from 1987.

Hope you enjoy my collection of Corsairs! 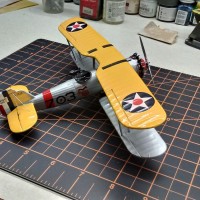 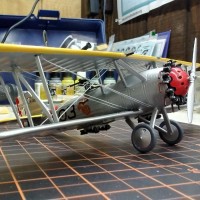 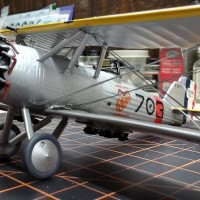 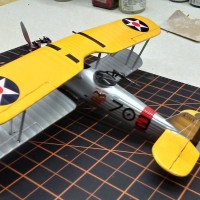 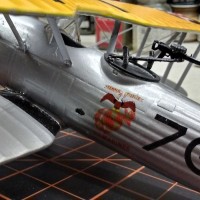 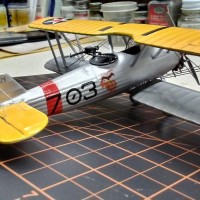 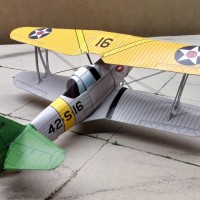 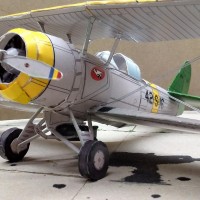 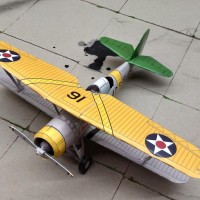 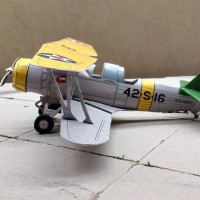 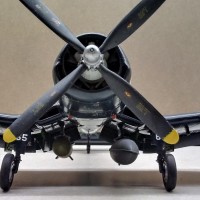 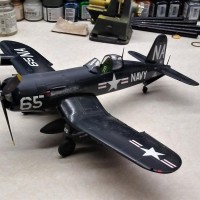 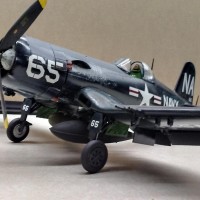 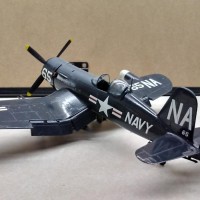 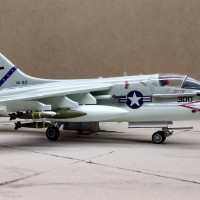 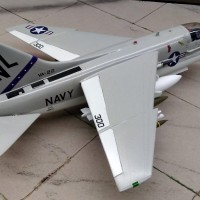 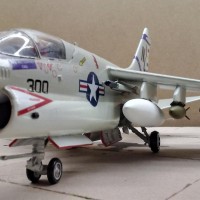 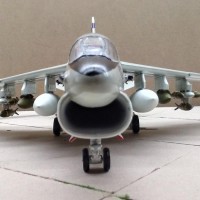 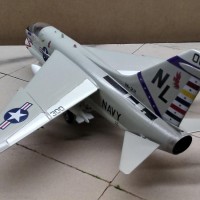 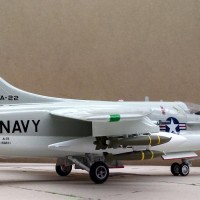 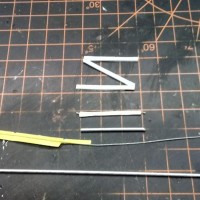 3. template provided in the kit

4. tubing with wire inside, hammered flat 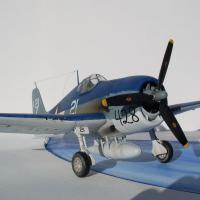 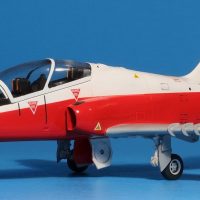 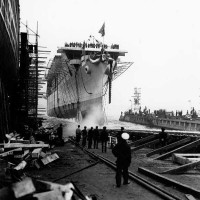 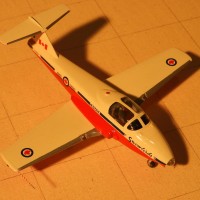