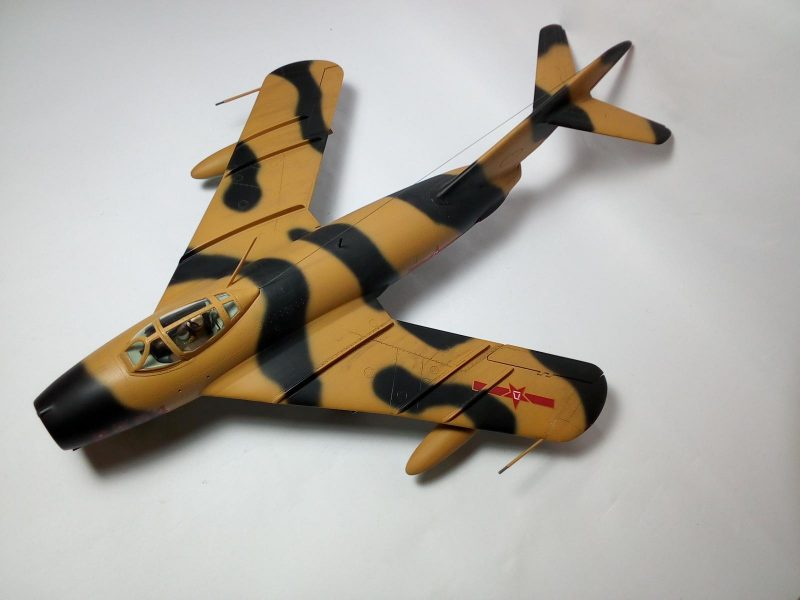 This is my Trumpeter 1/32 Shenyang J-5 (歼-5), a Chinese-built single-seat jet interceptor and fighter aircraft, derived from the license-built MiG-17F. 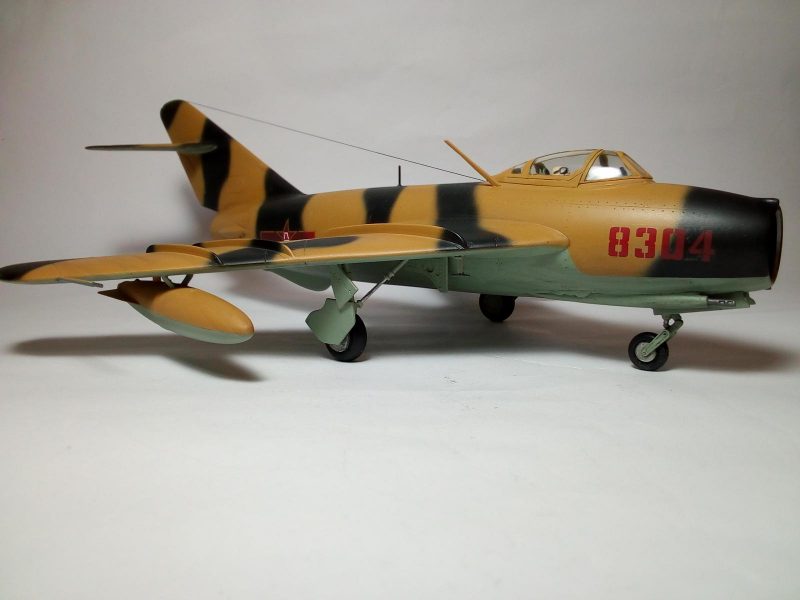 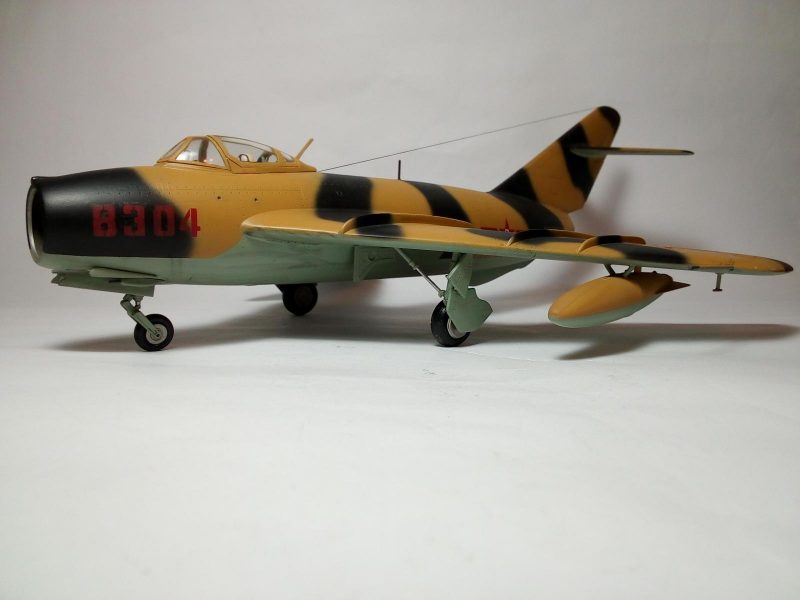 At this time the Sino-Soviet split occurred, causing much disruption to industrial and technical projects, so the first J-5A did not fly until 1964, when the type was already obsolete. A total of 767 J-5s and J-5As had been built when production ended in 1969. 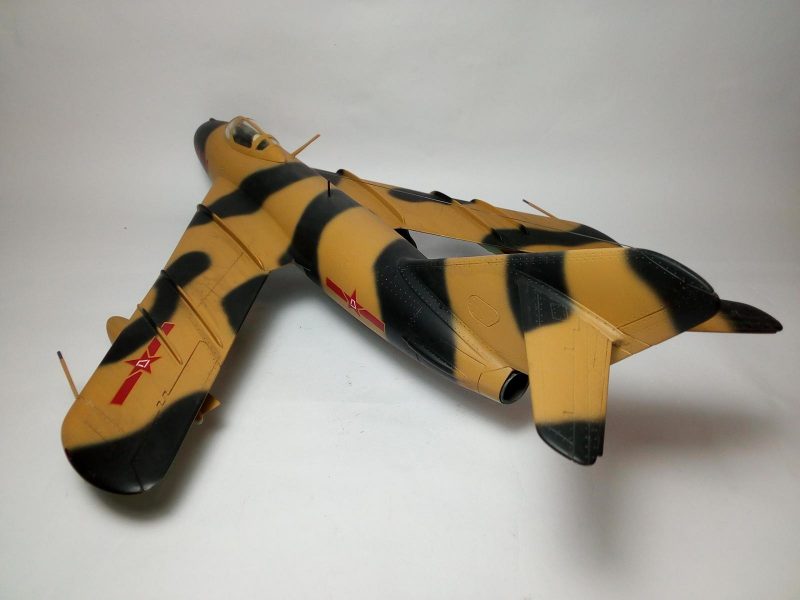 The type saw widespread use by the PLAAF, until supplanted by more capable aircraft, such as the Shenyang J-6 and later the Chengdu J-7.
The Chinese also built a very interesting two-seat trainer version of the MiG-17 (designated the Chengdu JJ-5) by combining the two-seat cockpit of the MiG-15UTI, the VK-1A engine of the J-5, and the fuselage of the J-5A. 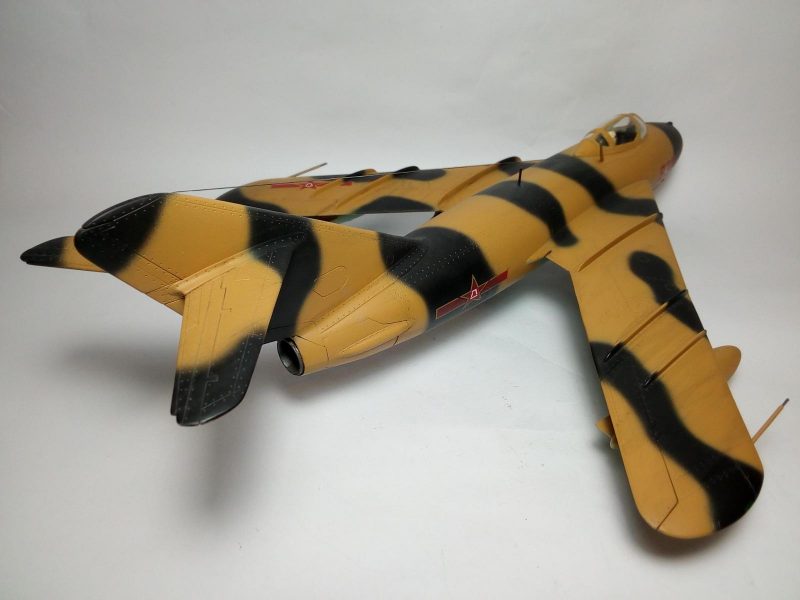 All internal armament was deleted and a single Nudelman-Richter NR-23 23 mm cannon was carried in a ventral pack. Production of the JJ-5 reached 1,061 (!) when production ceased in 1986, with the type exported to a number of countries. 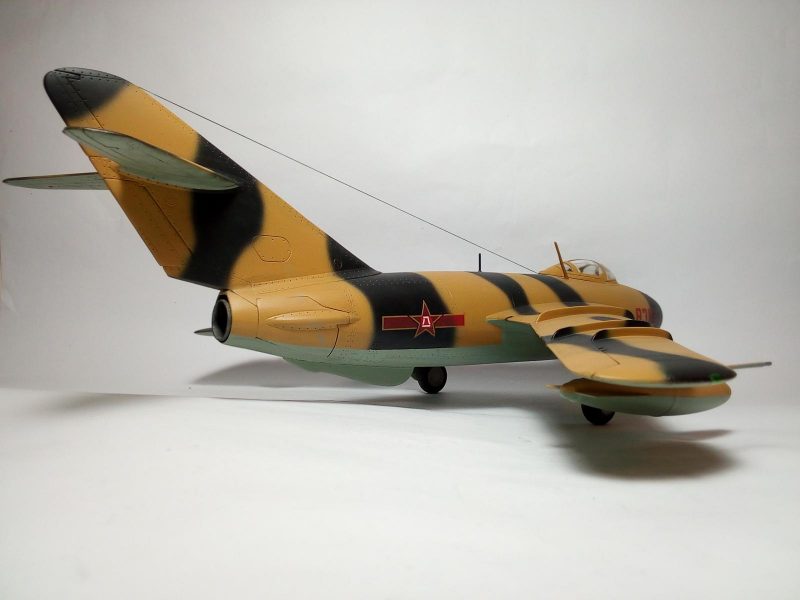 The super cheap Trumpeter kit is broadly based on the very good 1/48 Tamiya Mig-15 kit (with some accuracy issues, mainly canopy and tail shaping...) 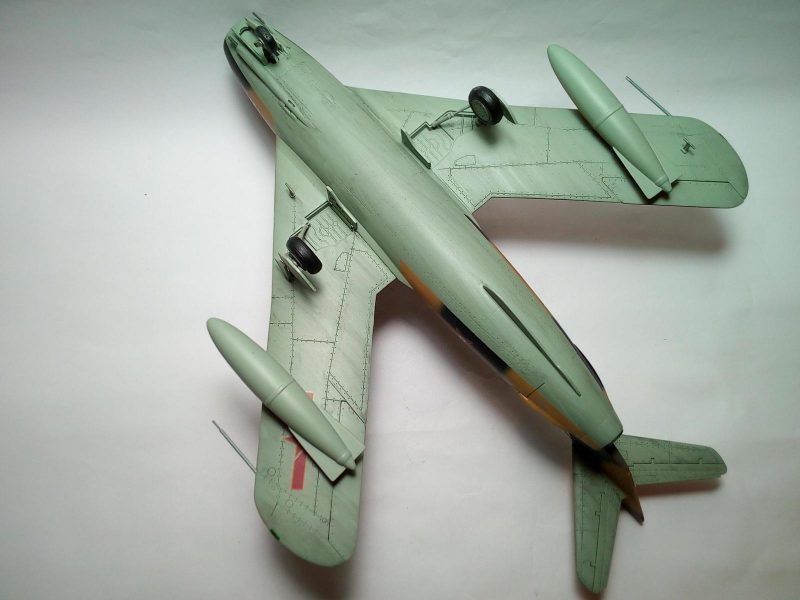 As it is practically pantographed to 1/32, some areas like the cockpit and the wheel wells look more plain/simplistic than most modelers would wish. For the former, I added the very nice kit provided pilot, for the latter, I did nothing 🙂 . 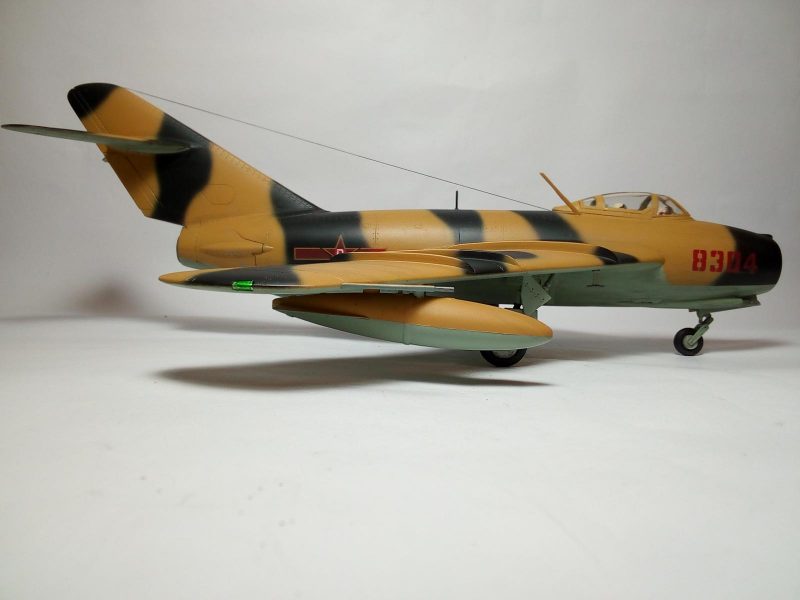 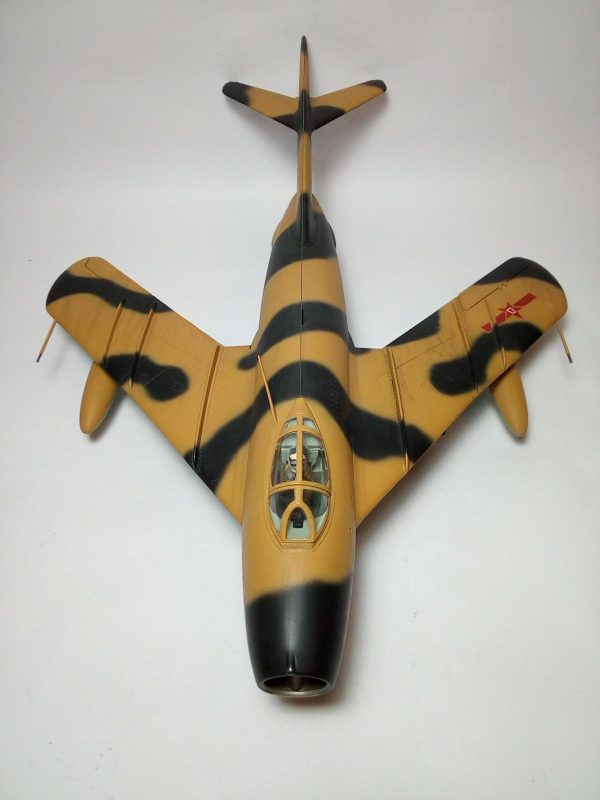 The rims provided were hollow from the inside, looking reeeeeealy toy-ish: I blanked them with sheet styrene (yes, pieces from my sons' party plates 🙂 , whereas the more devoted modeler might have attempted creating some kind of brake assemblies in there... 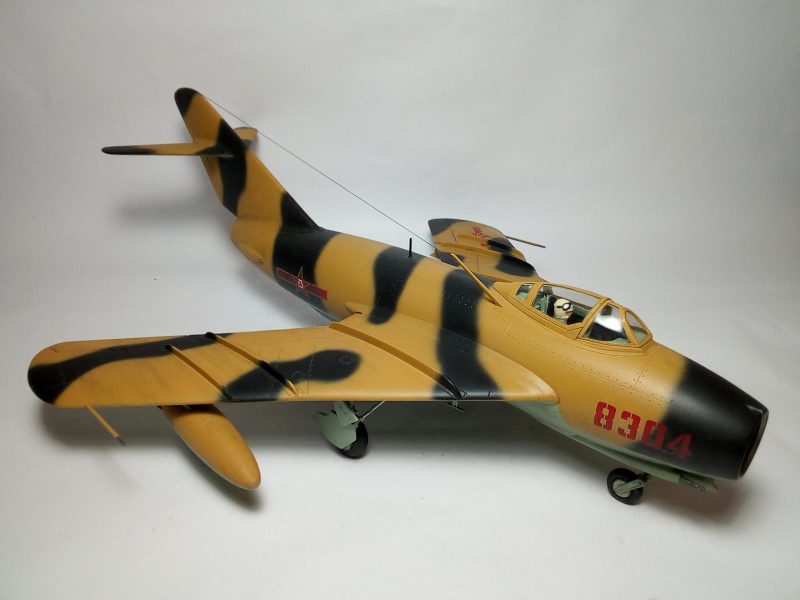 Putting the kit together was easy and fit was good.

Since only some generic codes and insignia, but no camo instructions were provided whatsoever (!), I was not reluctant at all to adopt a nice night fighter scheme, as depicted at the Net, drawn by artist Americo Maya and justified by some other net sources. 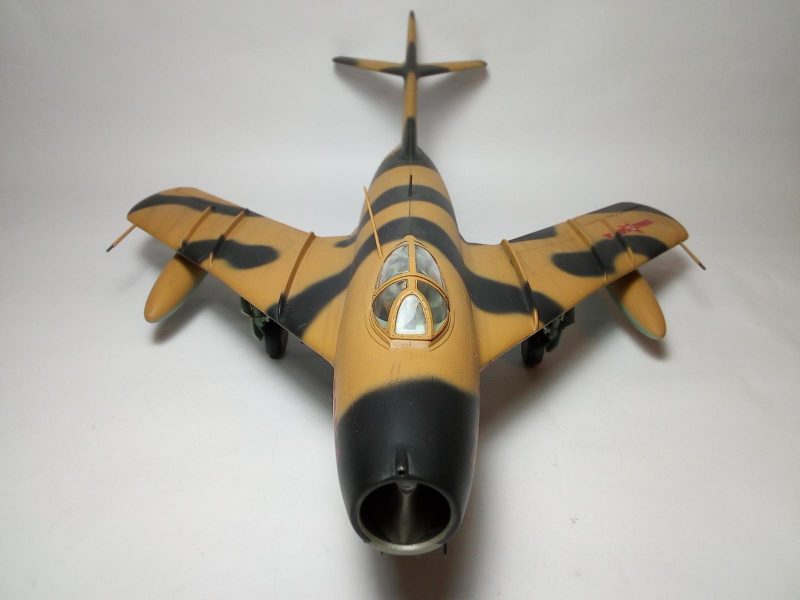 Should you wish to read the full build review, please do so by visiting my beloved Modelingmadness here: 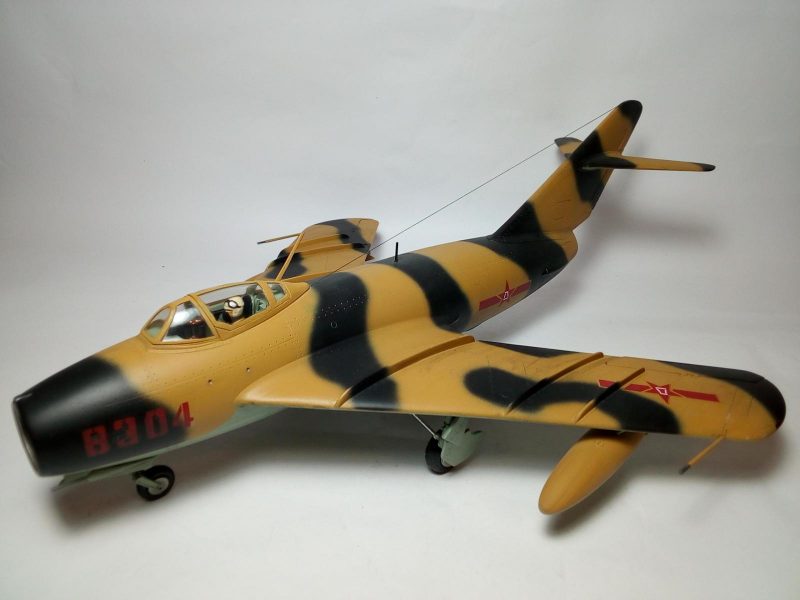 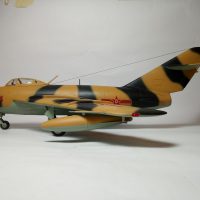 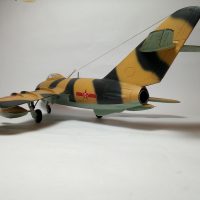 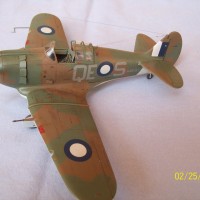 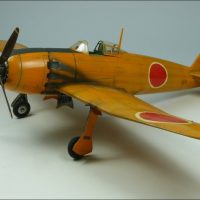 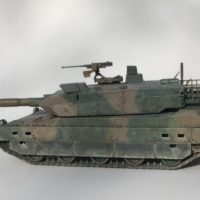 Just Under the Wire 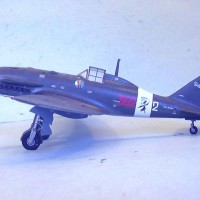