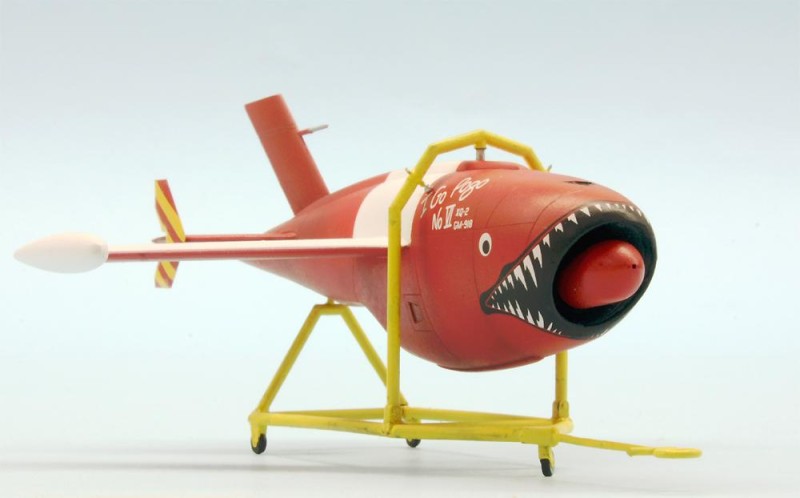 About the Ryan Q2A Firebee
Often you only have to deviate a little from the usual paths to get to know completely new landscapes - or to discover new perspectives on the familiar. I had a similar experience with this small but insightful project. The step from a model of a manned aircraft to one of an unmanned target drone is not a big one from a purely technical point of view, but nevertheless I was able to find out a lot of new and remarkable things from the world of the early "UAV, the Unmanned Area Vehicles".

Then, of course, there is the matter of the inscription: "I go Pogo". I just couldn't be bothered not knowing what could have been meant by this interesting-sounding message. But to my relief, from the moment I finally had the key in the lock, figuratively speaking, the mystery was easily solved in a rather cheerful way.

But more of that at the end of this article, because to begin with I'd like to share a few of the facts surrounding the Ryan Firebee that I found particularly interesting.

Right after the end of World War II, the US Armed Forces issued a request for proposals for a turbine-powered and near-sonic target drone, which was met with proposals from numerous manufacturers, sensing big business on the horizon. In the end, Ryan Aeronautical Company was awarded the contract for the XQ2.

The first flight of the prototype took place in 1951, and after extensive testing, series production soon began under the designation Q2A Firebee. The US Navy also showed interest: with a more powerful Fairchild J44-R-20B turbine instead of the Continental J69-T-19B engine of the USAF and under the new designation KDA-1, the Firebee soon also rolled off the production line for the Navy.

The Firebee fulfilled all expectations in terms of performance; over the decades, a total of more than 7000 examples of this agile remote-controlled target aircraft were delivered in numerous variants and some with extensive modifications. Incidentally, the Canadian Air Force was also one of the users: thirty KDA-4 Firebees were used to test the new weapon systems of the CF-100 and later those of the planned CF-105 Arrow from Avro Canada. Two modified Avro Lancasters were used as carrier aircraft for the Canadian Firebees.

The Firebees were launched either from the ground or by a carrier aircraft. For the spectacular ground launch, the drone was equipped with a RATO launch vehicle, while the air launch was initially carried out by modified B-26 Invaders, later joined by other suitable aircraft such as the C-130 Hercules.

Typically, Firebee missions took off at altitudes between 4,000 and 15,000 metres, with the aircraft crew connected to the drone's technical inner workings via an electronic umbilical cord until release. After disconnecting and dropping the missile, a flight control officer on the ground took over further flight control of the drone. Visual contact was not necessary and not even possible due to the speed and range of the Firebee. The position of the drone was determined by radar direction finding, the radio remote control by the ground control worked up to the remarkable distance of 240 kilometres.

The two streamlined bodies at the wingtips of the Q2A are not additional tanks, but house complex electronics that represented the "state of the art" at the time. On the one hand, the drone could detect missiles fired at it with its own radar source and continuously report their proximity in relation to its own position to the ground station; on the other hand, the nacelles also contained the receiver electronics for controlling the drone itself. Another actively emitted signal made the drone recognisable to the ground control station and helped guide aircraft towards the target actor.

A usual Firebee mission flight lasted from half an hour to the maximum flight time of one hour. If the drone had "survived" its mission in one piece, the ground station triggered the activation of a two-stage braking and landing parachute system. The Firebee finally landed undamaged on a 21-metre chute, after which it was recovered. So the Q2A was not necessarily a one-way machine, but designed for multiple target display flights. The number of "survived" missions was often displayed on the fuselage in the form of small graphics showing a stylised drone hanging from a parachute. To give you an idea: a well-documented Q2C Firebee thus brought it to 36 successfully completed missions: a true veteran!

"I go Pogo"
My colourful model shows an early Q-2 that was used by the US Navy for testing in the early fifties. ICM gives 1950 as the year of use, but I doubt this in view of the circumstances that led to the inscription "I go Pogo". I can, however, offer a time period that I think is more likely: 1952, the year of Dwight D. Eisenhower's successful US presidential campaign!

Where did I get this idea? The saying "I go Pogo", as it turns out, comes from a comic series by author and cartoonist Walt Kelly that was popular at the time. With the invention of Pogo Possum, an opossum who tends to be peace-loving but prone to cynicism, who lives in the swamps of Okefenokee together with fellow animal inhabitants such as Albert Alligator or Porky Pine, a wild …porcupine, Kelly found a main character for his stories who embodies the simple ordinary citizen - and at the same time often expresses the uncomfortable or the resistant: "complicated thinking of simple folk", as was written in a review.
In a 1952 volume of the Pogo series, the inhabitants of the Okefenokee swamp decide to put Pogo up for the presidential election. Their slogan is - in reference to "Ike" Eisenhower's slogan of the time "I Like Ike!" - "I go Pogo"!

Why the equally defiant "I go Pogo" landed on the drone will probably remain a mystery, but I personally enjoyed being able to place the catchy design of this special Q2A drone against the backdrop of politics and popular culture of the USA at the time.

ICM provides a convenient opportunity to let this interesting flying machine emerge as a model with the accurately fitting moulds. The construction itself goes quickly thanks to the clear shape design and of course also due to the simplicity of the original. Only in the details of the drone's suspension on the transport trolley could I not resist a little touching up.
Here iCM made it all too easy: the kit shows only one central pylon where the front end of the drone hangs from the frame. The reality was a bit more complicated: two adjustable stabilisers, similar to those used to suspend external loads or drop weapons under wings, prevented the drone from swinging in the frame. Since ICM does not provide anything for this, I helped a little by using wire pins and a few parts from the scrap box. The only tricky part was to drill the necessary holes in the round and narrow frame.

At the beginning of the construction I did not think how interesting the topic and how entertaining the research would be; my conclusion can therefore only be positive. It is good that ICM offers something interesting around the topic of Firebee and B-26 Invader! Who knows? Maybe one or the other drone or aircraft will join them! 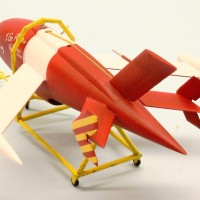 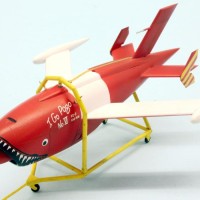 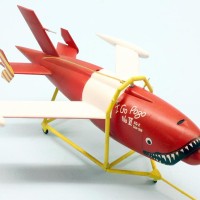 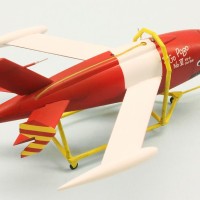 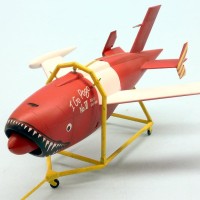 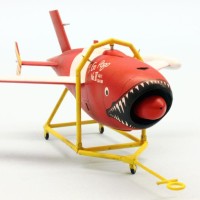 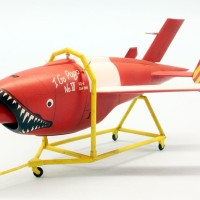 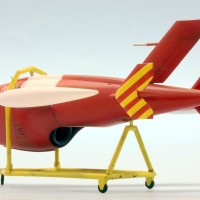 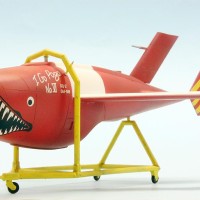 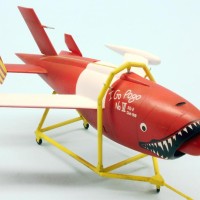 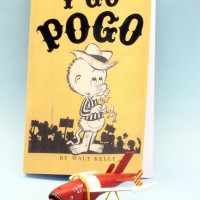 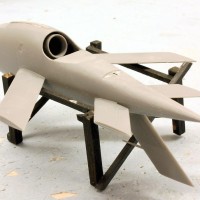 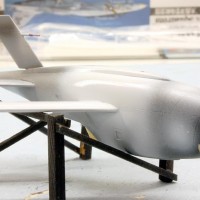 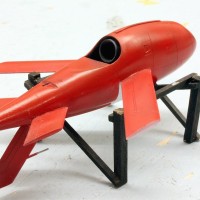 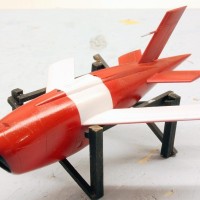 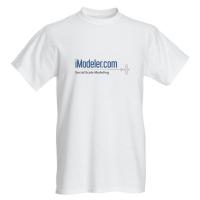 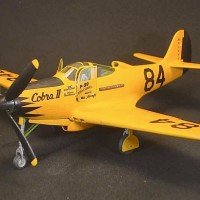 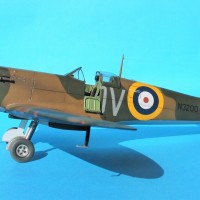 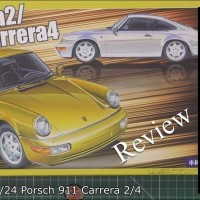