This next completed build has been a work in progress for many months. The kit itself is the "Reno Racer" version of Monogram's venerable T-6 Texan. I found this kit for $6, and a set of Aeromaster decals for just a bit more, both at a LHS. This kit included both the correct canopy for the T-6G, as well as the cowling without the machine gun cutout, both of which allowed me to build a USAF LT-6G, specifically "Night Train" of the 6149th TCS(A). This is a fairly interesting scheme for a humble yet interesting aircraft. The kit itself is not too bad, as the interior is pretty well detailed, and the raised surface details fairly accurately represent the real aircraft. As nice as the kit is, given its age, I couldn't help but add some additional details to raise the bar just a bit more. Starting with the interior, I decided to scratch build some additional detail to the rear turtle deck / radio compartments. I also added some rudder pedal assemblies, as well as a new rear instrument panel hood. The seats were also modified using donor parts from a Mustang, and Eduard PE belts were also added. Moving outside of the cockpit, I added some ignition wires to the engine, and again pulled parts from a mustang for the main landing gear tires (weighted, better detail), as well as the rear landing gear assembly. I also thinned down the rear edge of the cowling, added linkage for the rudder and ailerons, as well as various antennae where necessary. The last touch was to add the smoke rockets that were often found on these types of aircraft, I believe for marking targets for bombing/bombardment. Despite looking all over for the correct underwing armaments, I could not find anything exact. Thus, I ordered a 1/72 set of post-war British naval armaments, which represents about the 2.5" rockets, despite the warhead being much larger than the smoke rockets they are imitating. I modified their length, and custom mounted them on in trios, one under each wing. Most LT-6's I've found photos of have two such pylons, however, I had only enough rockets to do one set. Lastly, I intended to use a Squadron canopy on this aircraft to display the canopy open, but I was unable to find a canopy for a T-6 without the split side panels. Thus, the kit canopy was used, and Montex masks were utilized inside and out, to good effect.

For paint, I first sprayed the model with Tamiya X-1. After it had set, I oversprayed with Vallejo White Aluminum to depict the aluminum lacquer finish that was applied to these aircraft. From there, I again oversprayed but with Tamiya X-22 for the decal and weathering base. The Aeromaster decals laid down nicely, save for the red, white, and blue wingtip colors, which I did not have the patience to properly set into place. As a result, these colors were painted on. Initial weathering was done using Dark Brown Tamiya panel line wash. I used this to accentuate rivets, and areas where shadows and dirt should be prevalent. After cleaning off much of the excess and letting dry, the model was sprayed with Tamiya X-35 Semi-Gloss, to tone done the sheen. After this, the control surfaced (doped fabric in real life) were brushed over with Vallejo Matte varnish. Final weather was done using some more panel line wash in select areas, as well as some Tamiya pastels for dirt and soot. I hope you like what I've done with this old kit, and the aircraft it represents. As with any FAC, it's hard to really imagine the bravery of the individuals flying these slower aircraft, putting themselves in such a danger close position. Add that many forget or are simply ignorant to the history of the Korean Conflict... let this model represent remembrance of the "lesser" but all-important individuals in this conflict that society so-often overlooks.

WIP can be found here: 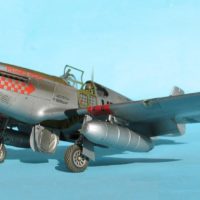 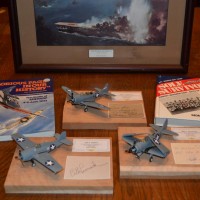