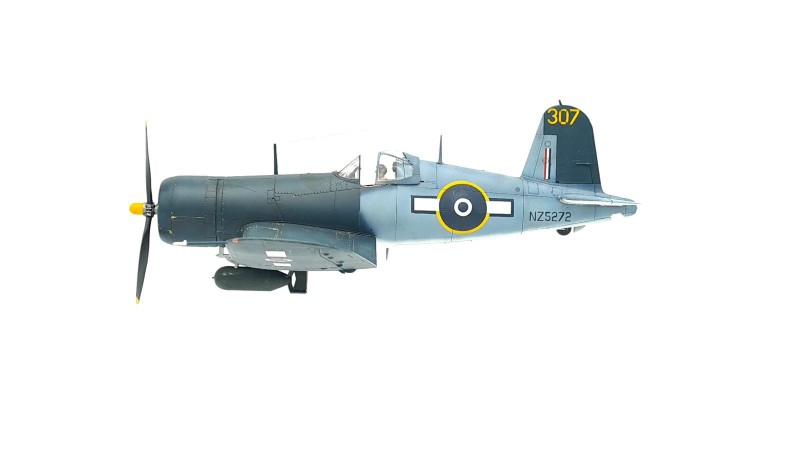 The final aircraft from the Corsair trio build is one that represents the 3rd largest operator of the Corsair, the Royal New Zealand Air Force whom operated the type from land bases in 1944/45. 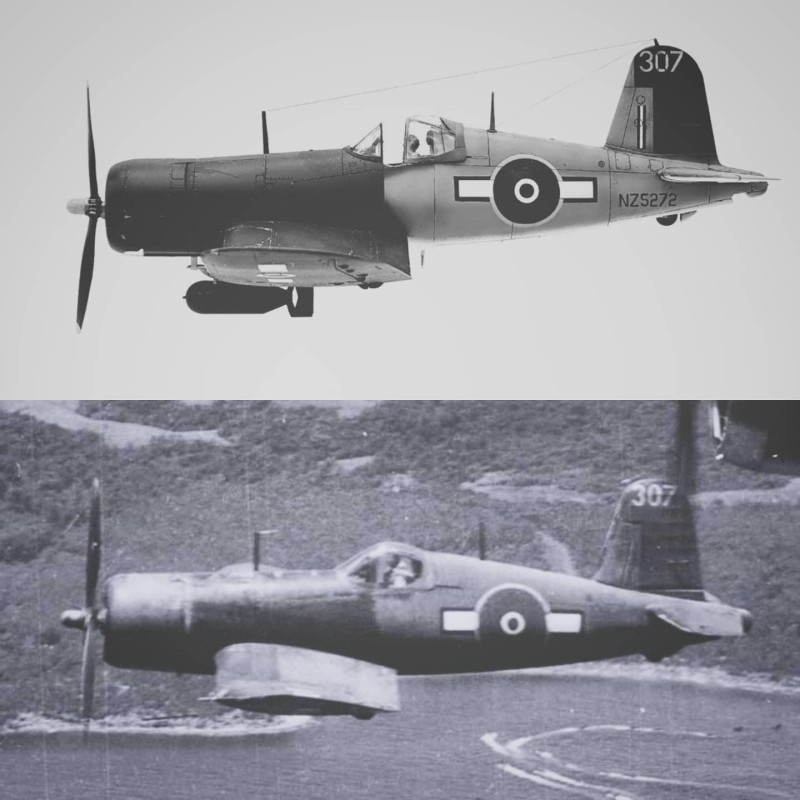 1. Comparing notes. How my model stacks up against the real thing. two notable issues are the slightly different layout of sea blue below the pilot, and that the canopy came out darker than intended on the model.


In 1942 the RNZAF began to operate in combat against the Japanese over the Pacific, having already faced them in the Burmese theatre, operating Hudsons from Henderson field. In 1943, they would begin fighter operations with the use of P-40 Kittyhawks to assist the American forces over Guadalcanal. 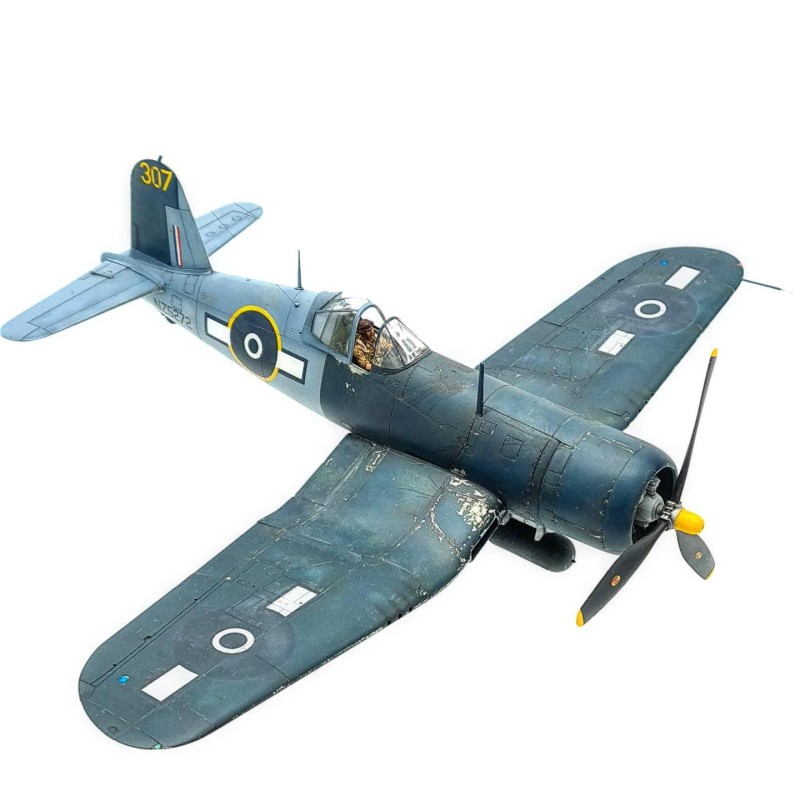 These P-40s, whilst well-liked by their crews, began to show their age and as such the RNZAF looked to see what alternatives were available. The Corsair was chosen, whilst being a naval fighter the type offered significant advantages over the P-40 and other land based options, first the RNZAF would go through the supply lines of the Navy/Marines rather than the Army, secondly the long endurance required of a naval aircraft would naturally be a requirement over the Pacific, thirdly of course the performance of the F4U was better over the P-40 in all aspects. Finally, the F4U was readily available at the time having been placed into production but failing carrier qualifications in the US Navy meaning the Americans had less need for the aircraft compared to other machines in their arsenal at the time. 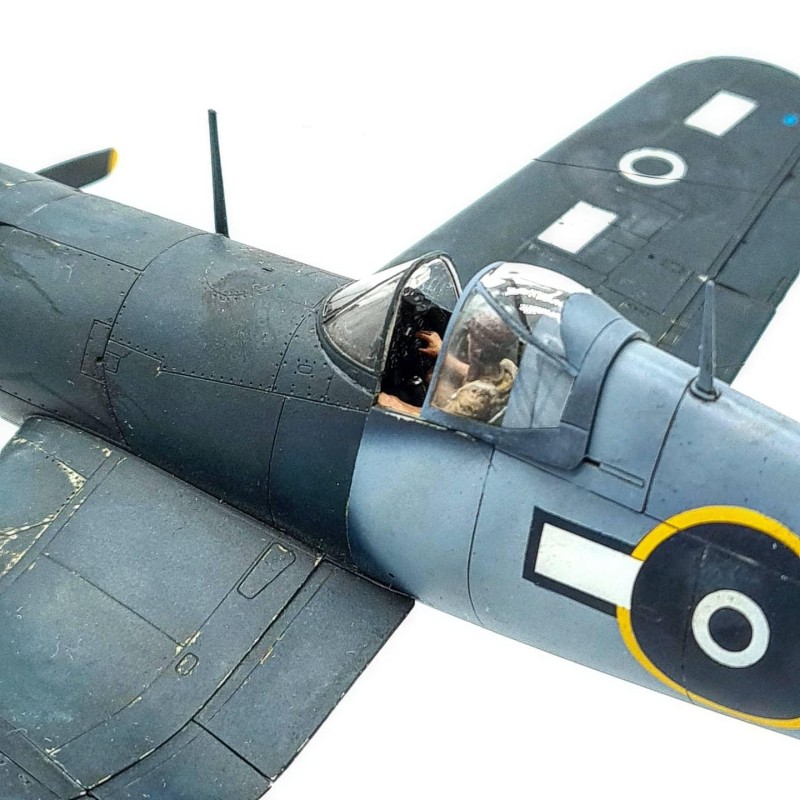 The New Zealanders began receiving their Corsairs in March 1944, with them first becoming operational on May that year. The F4U was well received as the flight performance far exceed the P-40s, especially at higher altitudes. On top of this the ruggedness of a the radial engined aircraft was appreciated, the longer range allowed for a longer patrol range, and the problematic landing issues at sea naturally were not an issue on land. Despite the upgrade in aircraft, no RNZAF Corsairs got any aerial kills. This is due to the Japanese air units in the area being completely decimated by the time the Corsairs appeared, US and RNZAF fighters had already swept the skies and the Japanese airbases which were cut off from supplies allowed both countries to destroy many aircraft on the ground with bombing raids. 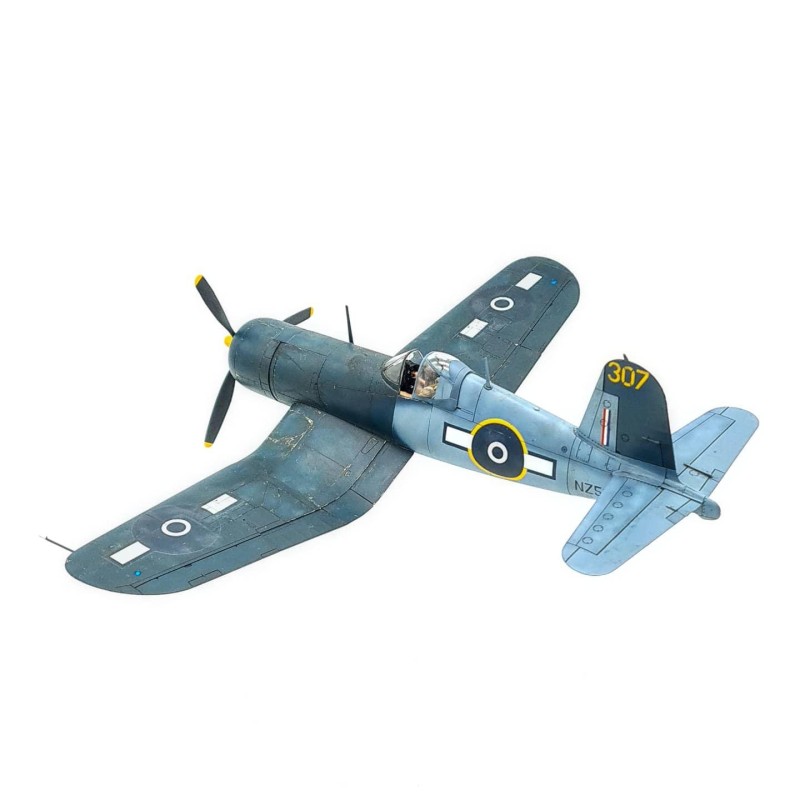 The Corsair's main role was the support the ground units in Guadalcanal, with bombing and strafing attacks in support of Allied assaults being a common mission. Patrols for both sea and air units were conducted, as well as escorting allied bombers uneventfully to their targets. 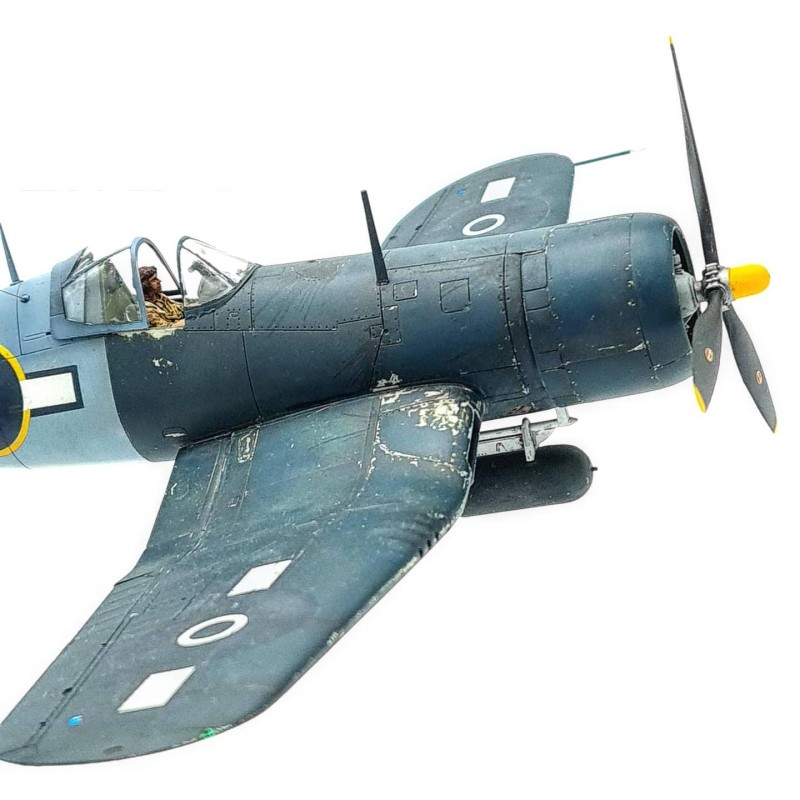 The famed Island Hopping campaign was successful, with each island moving the front closer and closer to mainland Japan. The goal of getting the the home islands meant that often Japanese forces were left cut off from supplies, a threat to be dealt with but seen as a waste of resources in the grand scheme of things by the US commanders. As the Marines left to go onwards with the campaign, pockets of Japanese bypassed which would become the objective of ANZAC forces to deal with. In Rabaul the RNZAF worked in pacifying the region from the air and in supporting Australian troops who were engaged in a bitter combat against Japanese left in Bougainville, with RNZAF Corsairs operating from the same airfields the famed USMC and USN aces had earlier operated from before. 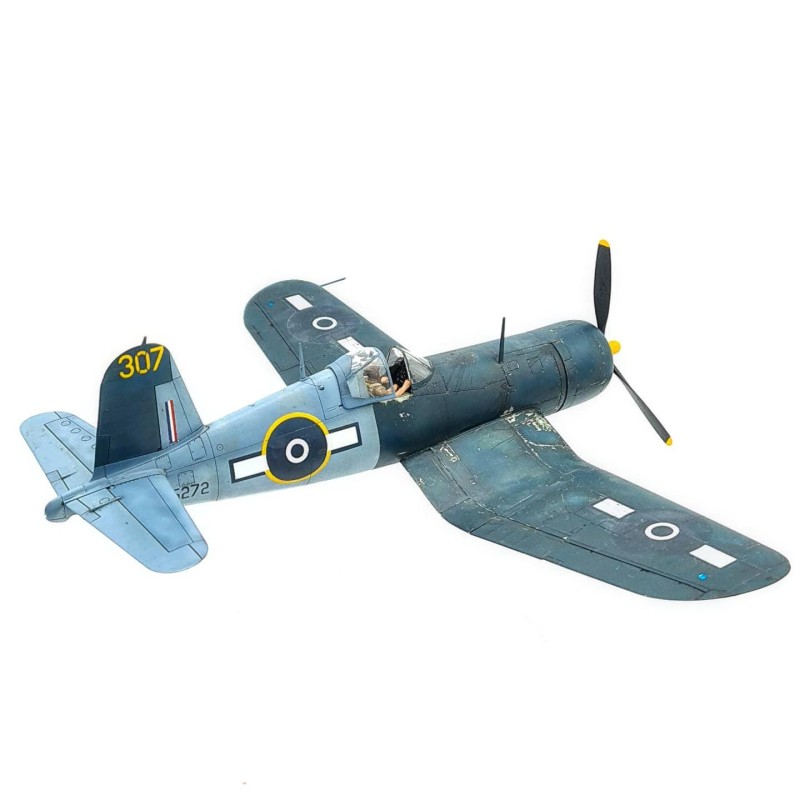 The Corsair would become a common sight over these islands and well appreciated by the troops on the ground, formations of aircraft would come in to suppress the Japanese troops as well as destroying emplacements with their bombs or machine-guns. The threat of anti-aircraft fire was a real issue, but thankfully losses to this were minimal. All in all, of the 424 Corsair's supplied to the RNZAF (the majority being F4U/FG-1A with a few F4U/FG-1D), 154 aircraft were written off in accidents, 17 shot down due to anti-aircraft fire with 57 pilots killed or missing. 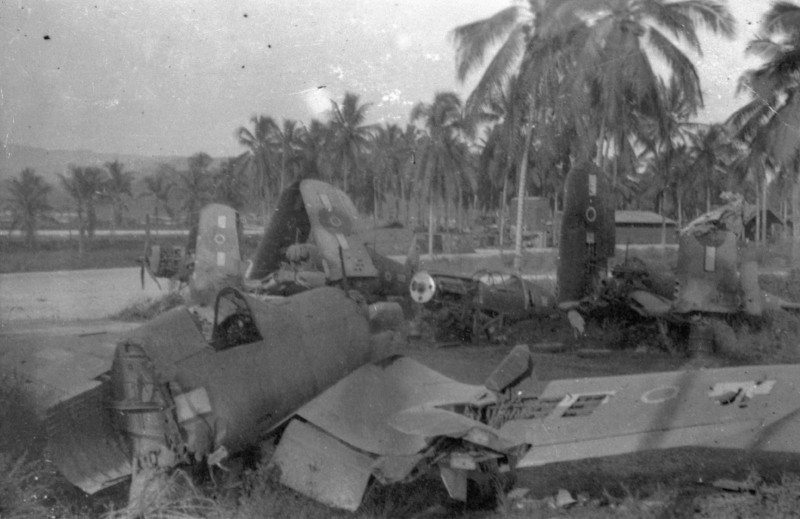 1. An example of a RNZAF Boneyard, any parts that could be used were. Reportedly some parts from a wrecked USMC F4U-1 Birdcage found their way onto RNZAF Corsairs, but I can't back that up.


With the introduction of the F4U-1D into US Navy service in April 1944, the Navy finally had a Corsair they would openly accept into carrier service as it passed qualifications. For the US Navy this was great, an aircraft with a high speed, high payload, and good range was available for the island hopping campaigns and immediately efforts were put into to making more squadrons available. The for lend-lease Fleet Air Arm and RNZAF this was a problem, the US Navy's renewed interest in the Corsair meant supplies would become harder to come by. For the Fleet Air Arm this caused issues, and they were part of the Island Hopping Campaign, with one such response to shortages on one ship being a brief ban on jettisoning external fuel tanks until one Corsair exploded due to a fuel tank fire. For the RNZAF, away from that campaign, supplies for repairing aircraft were more difficult to come by from the very beginning due to the time line, this promoted some interesting creativity of salvaging anything possible from damaged aircraft. 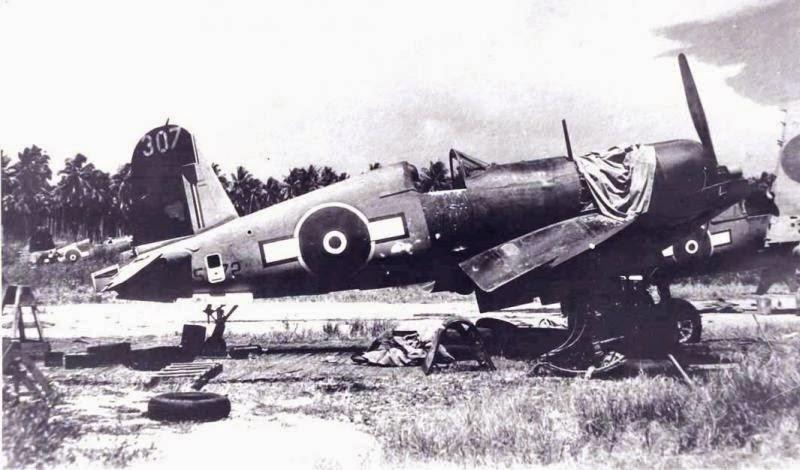 1. One such image available shows the aircraft during it's rebuild, another photo exists very similar to this but the aircraft hasn't been put on it's own legs yet.


One such aircraft would be the one modeled here. One airframe, NZ5272, would be written off in a landing accident at night when the main landing gear collapsed on the 1st June, 1944. The aircraft was then sent to the boneyard where any parts that could would be salvaged when possible. Not long later another airframe, NZ5307, would suffer tail damage during landing on the 13th June 1944 and be written off, it was decided to remove the damaged rear half of the fuselage and replace it with the undamaged one provided by NZ5272. The repairs done to NZ5307 would be completed and the aircraft operational by October that year, and the unique aircraft would go on to fly with the RNZAF under various squadrons until the end of the war. 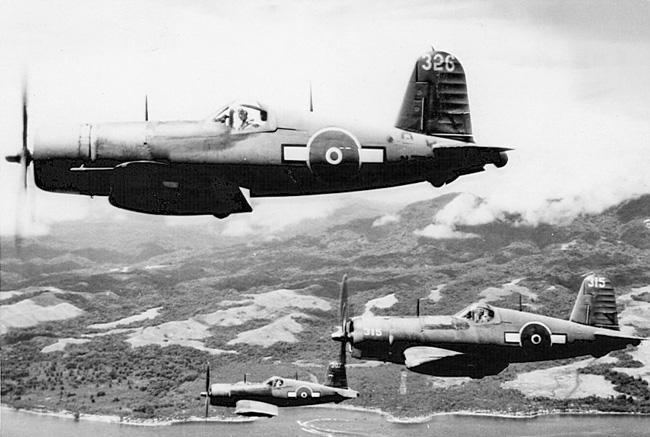 1. One of two in flight photographs of a trio, including '307' far out. Another image exists very similar to this, taken from the aircraft's 10'o'clock. 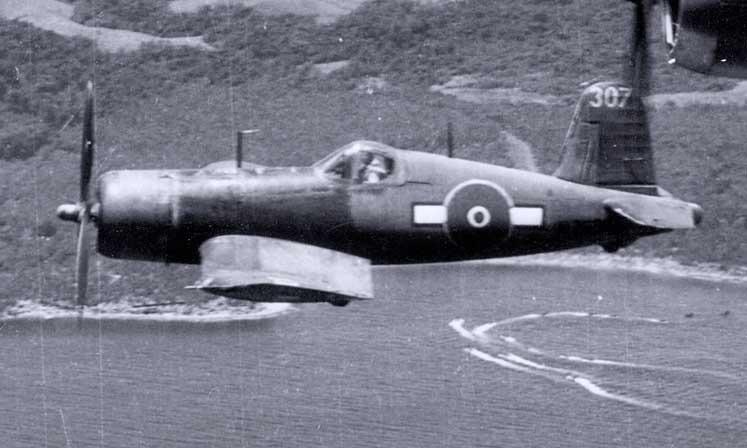 1. Zoomed and slightly brightened image of '307'

The build was that of a standard Tamiya Corsair, the only modification was to be wheels up. This was done the same as mentioned with the F4U-1C, but being the second attempt it came out a bit better. The rear landing wheel was more difficult to do on this one purely as it's best to glue the tailwheel onto some structure, normally provided by the tailhook, but this aircraft lacks the hook. 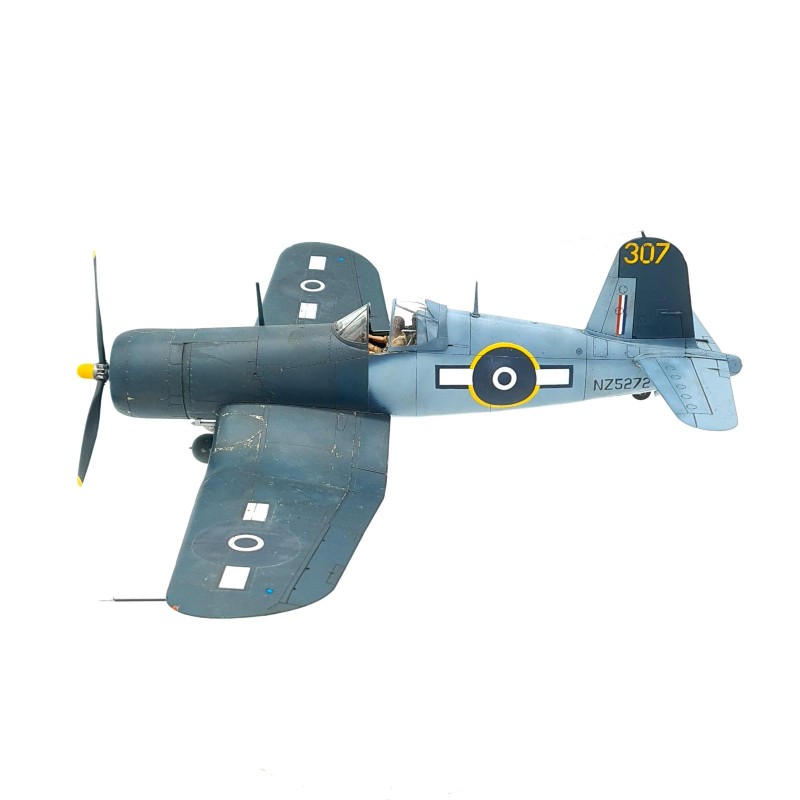 The interesting part was painting, a few photos exist of this aircraft which is quite helpful. Two of the aircraft in flight, two of it on the ground. Looking at these photos it's quite clear that the left side is NZ5307 up until the windscreen, with the right side going to the edge of the canopy. The two halves were masked off and painted completely seperately to make life much easier. 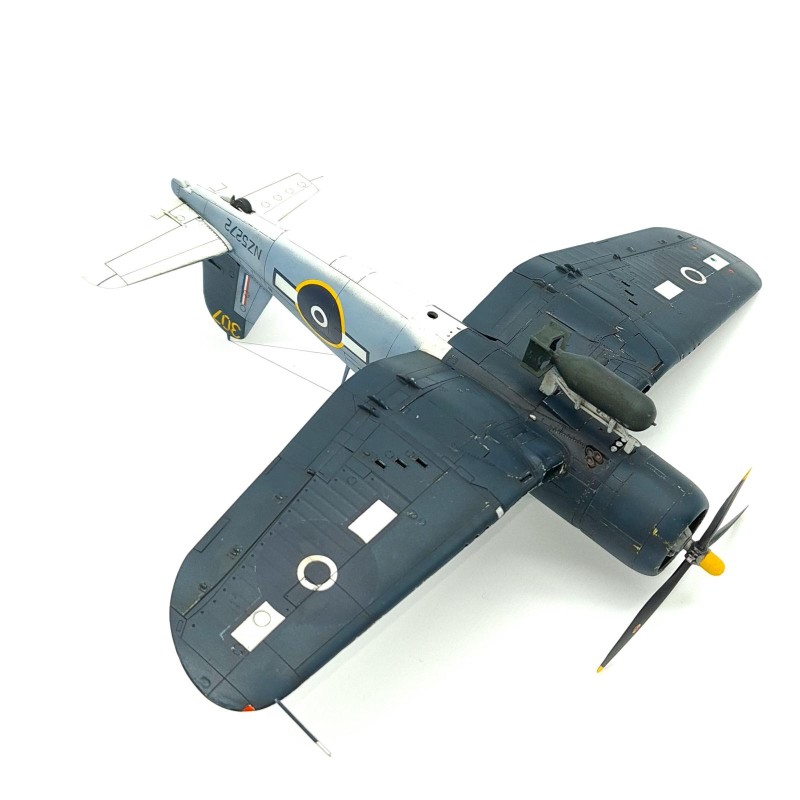 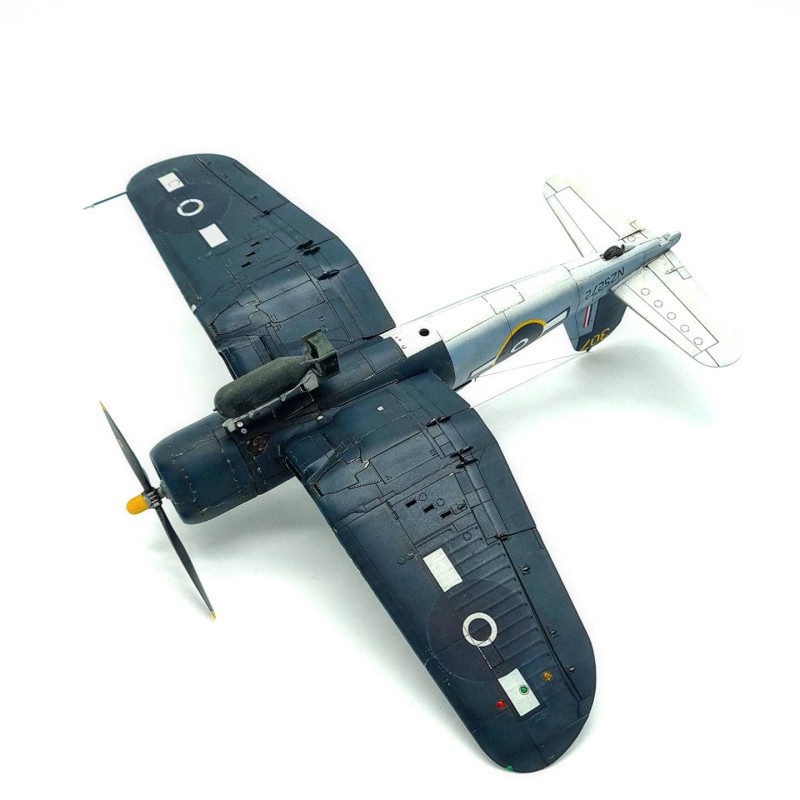 One of the most difficult parts was choosing just how to paint the NZ5272 fuselage. It's very clear from photos that it is extremely faded, the aircraft didn't have a long service life prior to the accident (about a month), so this must be attributed to being outside in the boneyard. Regardless I originally painted it in the base NS Sea Blue, and quickly ended up fading it down to try and match the photographs where there is almost no noticeable difference between the Sea Blue and Intermediate Blue. One curious thing is that whilst there is a clear sharp line of NZ5307's Glossy Sea Blue on the left side of the fuselage, there seems to be an area that is NS Sea Blue on the panel behind this. This may even be from a third aircraft as it's a different shade to either fuselage halves, but I tried to replicate it here somewhat. 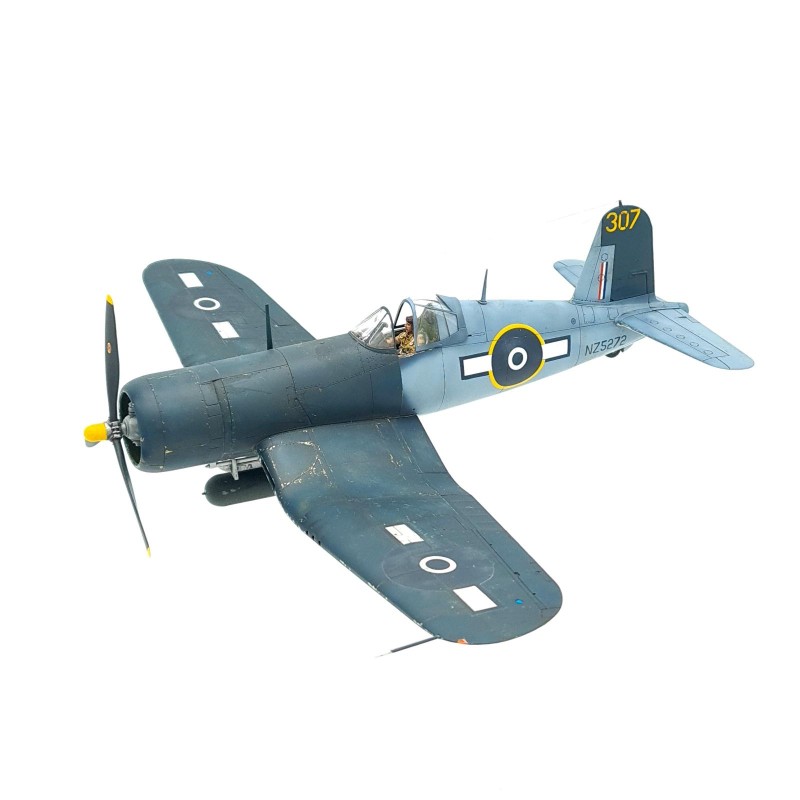 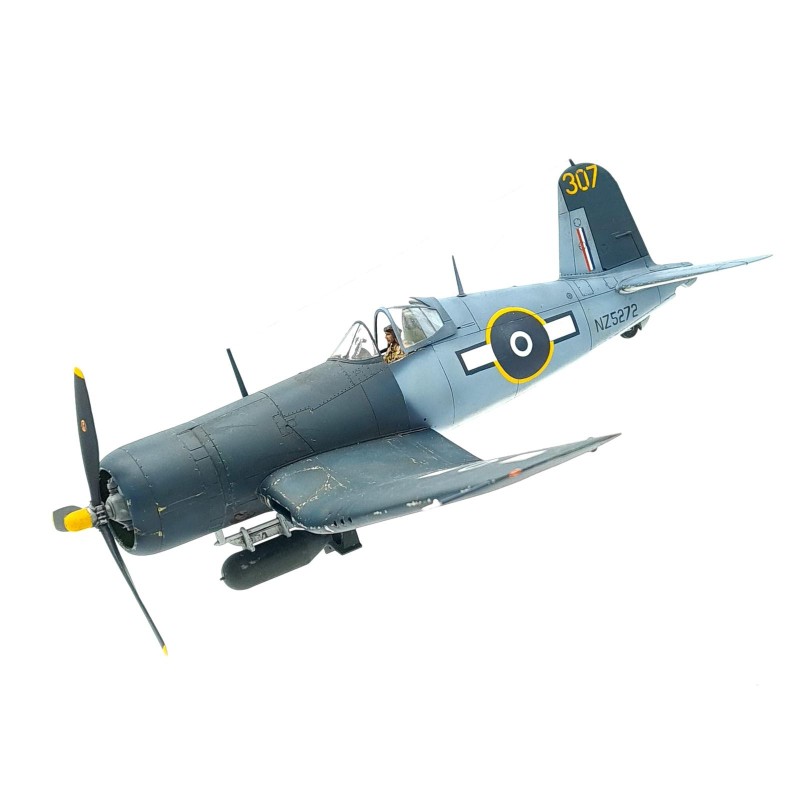 Montex masks were used for all markings, I couldn't see any stencils on the rear half of the aircraft and as the overall Sea Blue half was supposedly painted that colour over regular Tri-colour when arriving in New Zealand hands, I imagine all the stencils were overpainted. I did use some oils largely focused on the wings to give some more fading and tonal variations than was already there, before the aircraft was given an overall Semi-matt coat to replicate some fading. 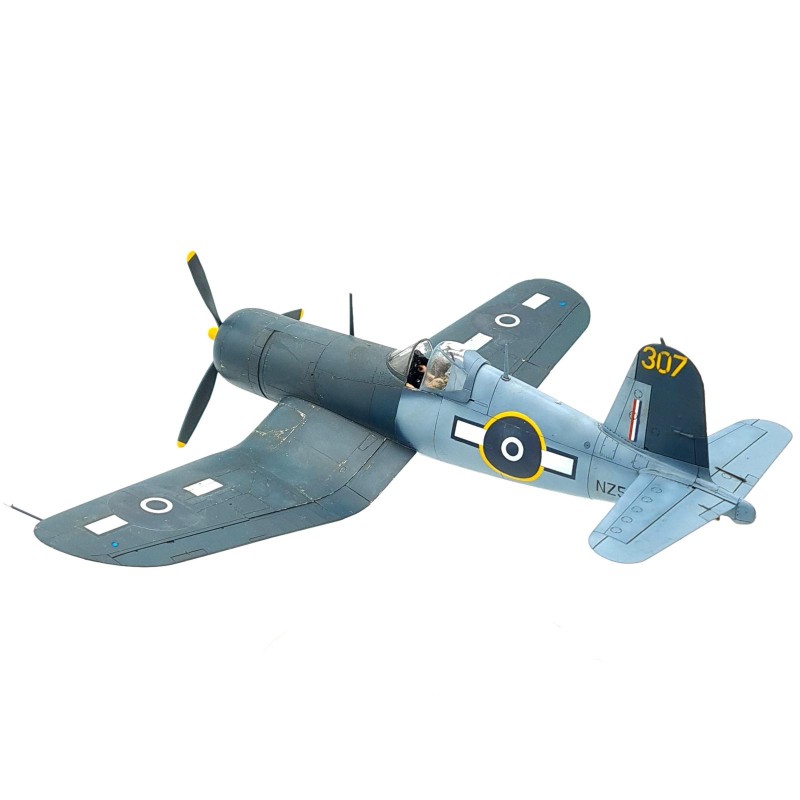 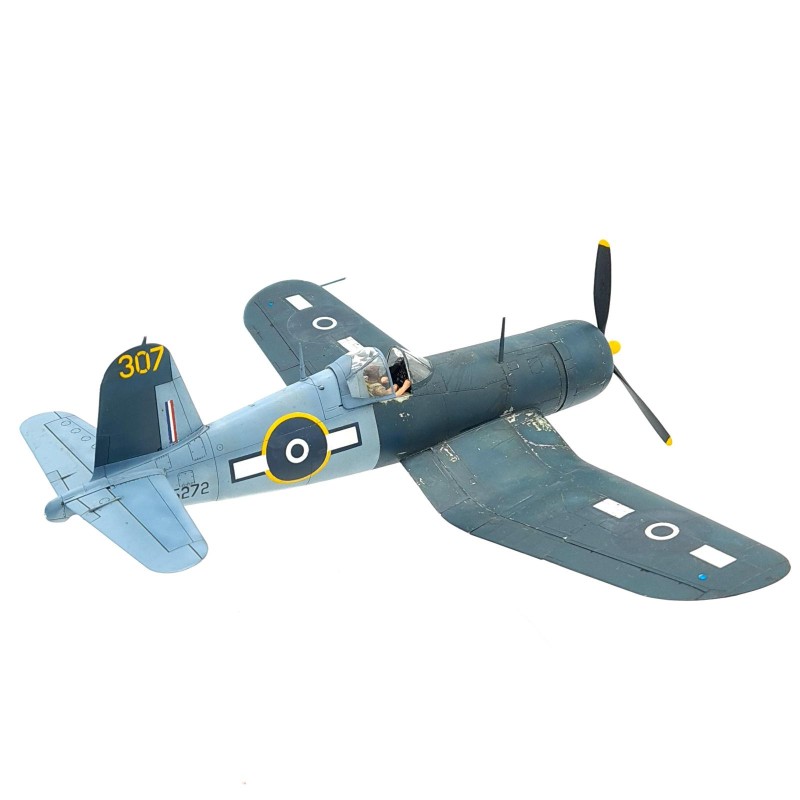 Not a lot to say, it was a fun largely out of box build with exception for the montex and eduard masks. Easy, relaxing, no issues, all the reasons why I like the Tamiya 1/48 Corsair. I definitely looks unique in the cabinet amongst the other Corsairs and being able to represent the RNZAF as the third largest operator of Corsairs, as well as showing a slice of their involvement in the war, is a nice thing to check off of the Corsair list. I still wouldn't mind doing another RNZAF bent wing bird as they have so many unique and interesting schemes thanks to their circumstances in the pacific. 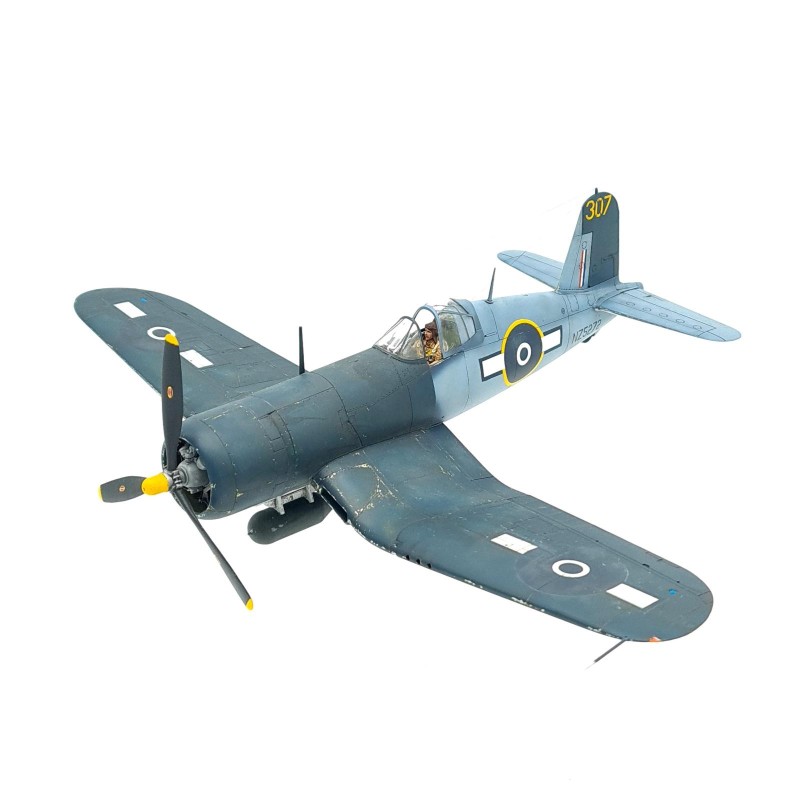 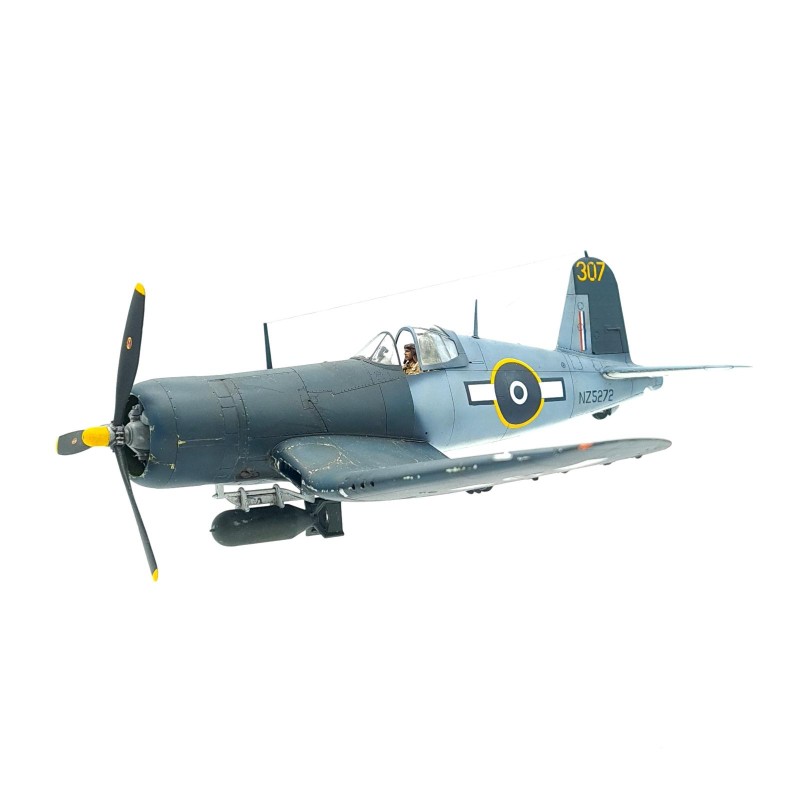 With that, the trio Corsair build is concluded. It's been a long one largely due to life and certainly took longer than I'd like as the last triple Corsair build didn't take this long to get through, just have to work out what Corsairs to do next! 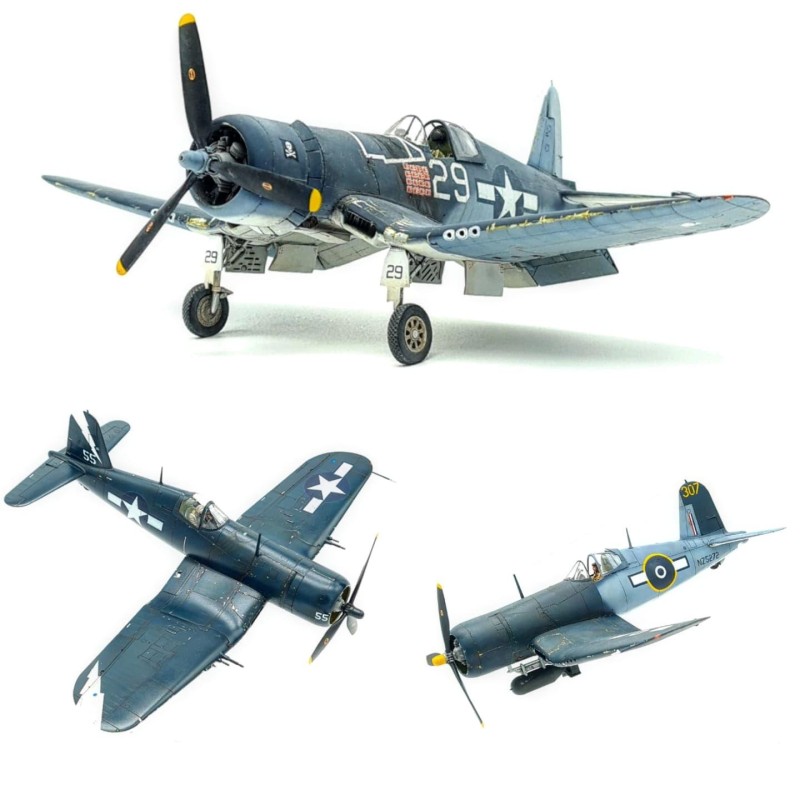 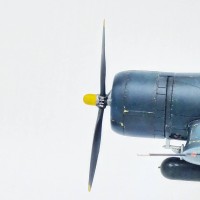 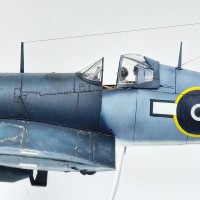 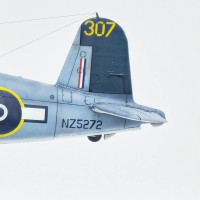 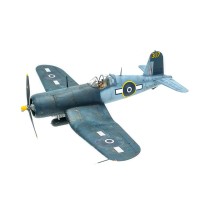 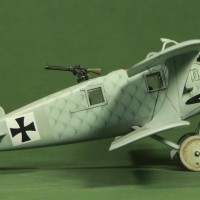 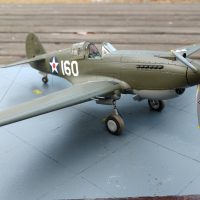 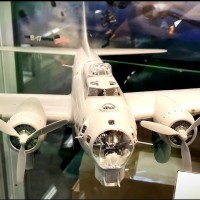