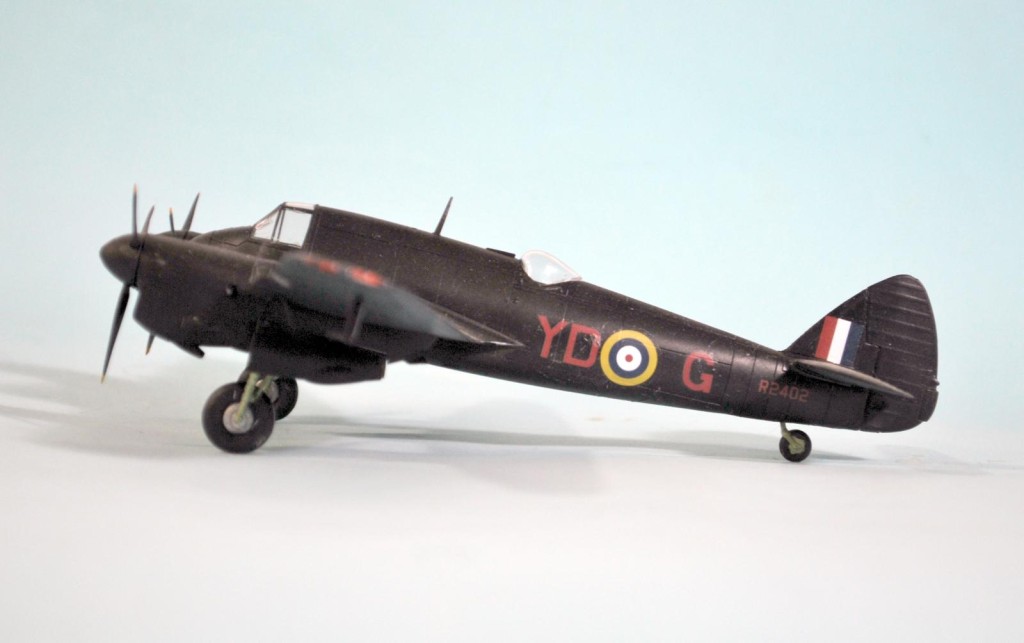 The Beaufighter had demonstrated its performance by the fall of 1940 as the first Beaufighter Is entered squadron service. However well the Beaufighter performed though, the Short Stirling heavy strategic bomber program had a higher priority for the Hercules engine.

The result was the Rolls-Royce Merlin XX-powered Mark IIF night fighter. Roy Fedden, chief designer of the Bristol engine division, advocated for adoption of the improved Hercules VI for the Beaufighter. This idea was soon passed over in favor of the Griffon engine due to the fact the Hercules VI required extensive development before it would be ready for service. However, production of the Griffon was reserved for the Fairey Firefly. Thus, the Air Ministry opted for the Merlin as a powerplant for the Beaufighter until the production rate of the Hercules could be raised by a new shadow factory in Accrington. The standard Merlin XX-powered aircraft was later called the Beaufighter Mark IIF.

In February 1940, an order was placed for three Beaufighters to be converted to use the alternative Merlin XX engine. The engine installation and nacelle were designed by Rolls-Royce as a complete "power egg." The design and approach of the Merlin installation for the Beaufighter was later incorporated into the design for the Avro Lancaster.

In June 1940, the first Merlin- powered aircraft conducted its first flight. The second was delivered in late 1940, the third having been destroyed in a bombing raid. Flight tests found with the Merlins, the aircraft underpowered,. Additionally, it had a pronounced tendency to swing to port, making take-offs and landings difficult and later resulting in a high accident rate; out of 437 Beaufighter IIF’s produced,102 were lost in accidents.

The success of the converted prototypes led to production aircraft in 1941. In late April 1941, the first two Beaufighter Mark II aircraft, R2277 and R2278, were delivered to 600 and 604 Squadrons, with 600 being the first to receive the type in quantity in the following month.

600 Squadron, the first to be fully-equipped with the IIF, was based at Predannack in Cornwall, where they could intercept enemy bombers using the Irish Sea and St. George’s Channel for attacks on the Merseyside cities and Belfast. They were also tasked with intercepting Fw-200 Condors that flew out to the Western Approaches on weather reconnaissance.

While the Beaufighter IIF had a superior high-altitude performance to the Hercules-powered Mk. I, 600's CO, Wing Commander Pearson, wrote that it was “...an unnatural and dangerous aeroplane... intended to counter a high-altitude threat which never materialised... The change of engines altered the centre of gravity and and made the aircraft unstable at low speeds. No matter how the aircraft is trimmed, it will never fly straight and level hands off.” He concluded, “The Beaufighter is a great aeroplane; the Merlin is a great engine. Together they are a great disaster.” By the end of 1941, the squadron reported they were “...fortunate to receive Beaufighters with trusted radial engines.”

Other squadrons operating the Beaufighter II reported similar problems. The Polish pilots of 307 squadron complained so loudly that it had been “fobbed off” on them that the squadron was one of the first to receive the new Beaufighter VI that solved most of the difficulties of the Mark I and II Beaufighters in April 1942.

Some 22 Mark IIs were also supplied to the Fleet Air Arm of the Royal Navy, where they were used as high-speed target tugs. By mid-1942, the Beaufighter IIF had been taken off operations and the last of them were operated by Operatonal Training Units until 1944.

Airfix’s new 1/72 Beaufighter showed up in 2015, and quickly demonstrated it should be listed as Best In Scale. The kit has a cockpit/interior well-detailed for the scale, with further excellent detail in the landing gear. The kit design is excellent and results in a model that can be assembled quickly without filler or putty required anywhere.

Special Hobby announced two years ago that they were going to do a resin conversion for the Merlin-powered Beaufighter NF II in 1/72 and 1/48. Covid slowed the progress of the project, and the 1/72 conversion was only released earlier this year. The 1/48 conversion, for use with the Revell kit, will appear this fall.

The conversion is easy. The inner wings with the different engine nacelles are provided, along with the engine cowlings, props, different gear doors, and the smaller flat horizontal stabilizers. These are all drop-fit. The kit wings are cut along a panel line, to use the outer wing with the resin part. The fit of the wing to the fuselage is as good as the original plastic.

Care is needed to be sure that the engine cowlings, which are butt-fitted to the inner wing, are properly aligned; they should be vertical to the ground. Other than this, there is no difficulty with the overall conversion.

Once I had converted the wings, I proceeded to assemble the fuselage. I painted the interior British Interior Green, and used the kit instrument panel decals. The conversion set included photo-etch seatbelts and I used these.

The Beaufighter II was used during the period of all-black night camouflage. After painting the wheel wells British Interior Green, I painted the rest of the model with Tamiya X-18 Semi-gloss black. I then used Tamiya XF-69 NATO Black to lighten the upper surfaces and provide some mild color difference.

The decals provided by the conversion kit went on without difficulty under Micro-Sol.

I went over the kit with a couple coats of Clear Flat to get the dead-flat finish of the RDM2 night fighter camouflage.
After assembling and attaching the landing gear and umasking the canopies, I attached the very delicate photo-etch radar antennas. They are so delicate that I ran Cyanoacylate glue over them after they were installed to give them some extra strength. Be sure not to handle the model anywhere near these or you will lose them.

I’ve long wanted the Merlin Beau in my collection, and Special Hobby has come to the rescue. This conversion is so easy that if you have never done a conversion, this would be good to use for a first time. Highly recommended. 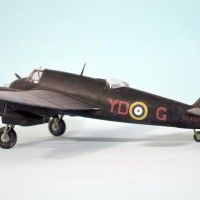 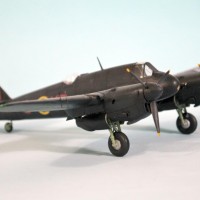 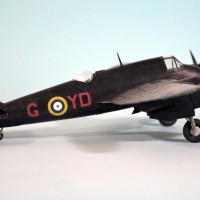 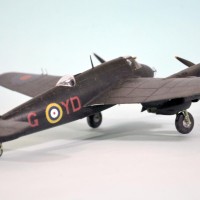 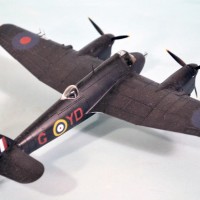 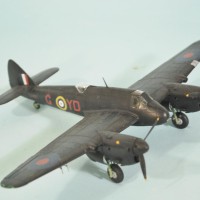 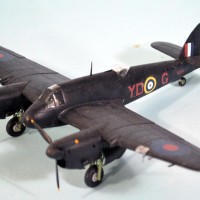 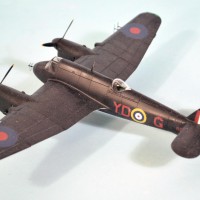 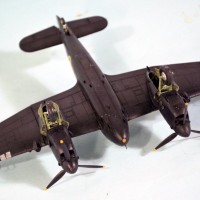 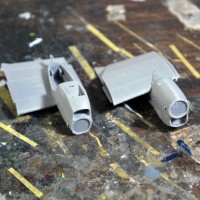 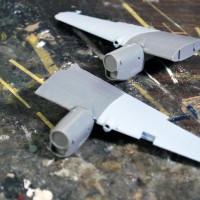 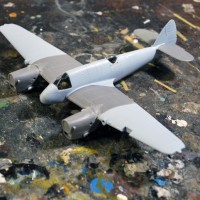 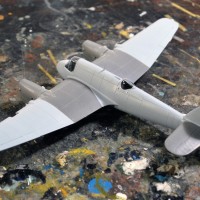 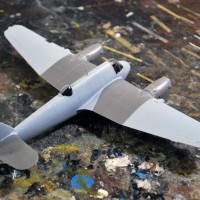 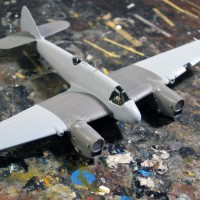 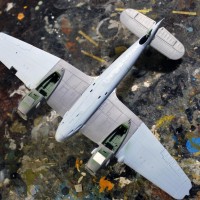 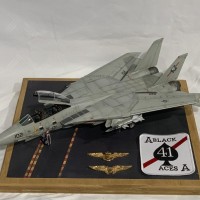 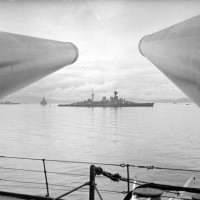 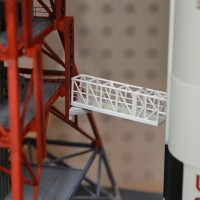 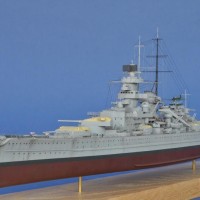