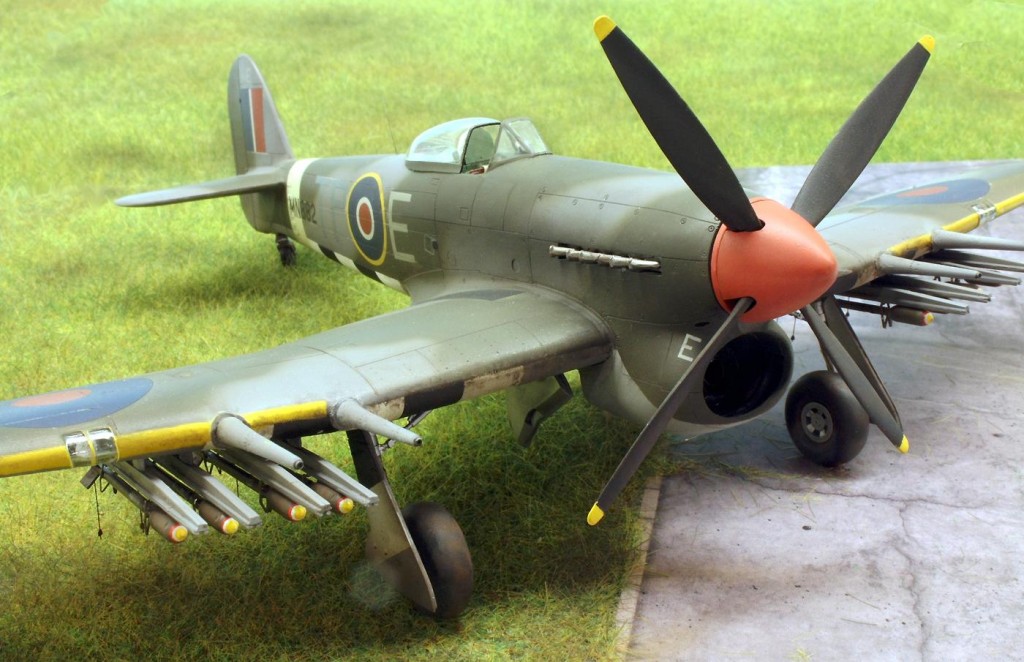 Hurricane, Tempest, Tornado, Whirlwind, Thunderbolt - and Typhoon: energetic weather phenomena as namesakes are very popular with aircraft manufacturers. Hawker Aircraft in particular seems to have subscribed to these names. Many of these types have gone down in aviation history as legends, their names still evoking images of power and endurance today.

The Hawker Hurricane is undoubtedly such a model. It was to write aviation history and help decide the course of the war - and yet a successor model was already being planned at the time of its introduction. Sidney Camm, the genius of Hawker's development department, began preparing the design of a fighter aircraft in January 1938 on the basis of the F.18/37 specification, which would be able to handle the power of a completely new generation of engines: the 24-cylinder Napier Sabre and Rolls-Royce Vulture engines, which were currently being developed, promised a power output of over 2000 hp, which was unheard of at the time.

Over the next few years both engines were extensively tested in Sidney Camm's new design. The prototype equipped with the "Vulture" engine - called the "R-type" - was to be produced as the Tornado, while the "N-type" was given the name Typhoon. The Hawker Tornado first flew in October 1939, the Typhoon took to the air for the first time a little later in February 1940.

However: both prototypes quickly showed technical problems, which were not only related to the complex, new high-performance engines: the aerodynamic design of the Tornado led to noticeable compressibility effects in high speed ranges, and in addition its power yield was disappointingly meagre despite the unheard-of power source in the nose. It soon became clear that further development would not be worthwhile and the second design, the Typhoon, would be chosen for series production.

But here, too, a whole series of problems had to be solved. Difficulties with the complex Napier Sabre, for example, led to the Bristol Centaurus being considered and tested as a replacement; the Typhoon almost had a powerful radial engine. In the end, however, most of the shortcomings were overcome and the Hawker Typhoon was put into series production as a promising fighter with superior performance. Interesting in this respect: only the first 15 examples of the Ia and Ib were built at Hawker, the large remainder of the 3 263 Typhoons produced would be manufactured at Gloster, from 1934 part of the Hawker-Siddeley group.

The first missions of the new type quickly made it clear that further action was needed. The twelve 7.7mm machine guns of the first Typhoon series proved to be clearly inadequate. Furthermore, after a series of fatal crashes, a lengthy troubleshooting began, which finally led to a reinforcement of the connection between the tail fin and the fuselage. The rear section of the cockpit fairing was also criticised; only after this was replaced by transparent glazing did the demanded improved rearward visibility result.

With the revised Hawker Typhoon Ib, now with four 20mm cannons in the wings, the RAF was supposed to have the long-awaited new fighter at its disposal from mid-1942. However, the Typhoon soon proved to be outclassed in its role as a fighter. It was neither superior to the -now increasingly emerging- new threat in the form of the Fw 190, nor did it represent a gain as a high-altitude fighter or for escort missions of the bombers. With the introduction of the superior Spitfire Mk.IX, the Typhoon's career as a pure fighter was over.

The great hour of Hawker's powerhouse was to come when this formidable and impressive aircraft was used as a fighter-bomber. This was a real need for the RAF and the Typhoon, in conjunction with a recently developed weapon, provided an almost perfect solution. Equipped with two 227kg bombs or eight RP-3 missiles, the aircraft became a truly devastating threat to armoured and unarmoured vehicles, supply lines, railway trains and enemy installations of all kinds.

A key to the Typhoon's lethal success as a fighter-bomber lay in its use of RP-3 missiles, of which up to eight could be carried. Also known as the "60-pound rocket" in reference to its warhead, the missiles carried a 27-kilo explosive charge to the target. The missile body itself consisted of a steel tube a good 1.4 metres long that held the propellant charge in the form of 5.2 kilos of cordite. Stabilised by the spin created by four fins mounted in the tail, the RP-3 shot towards the target with a maximum acceleration of between 230 and 380 metres per second.

The missiles were deployed with various warheads. In addition to the 60-pound charge already mentioned, an 11-kilo warhead was also used; all variants came in different armour-piercing or high-explosive forms. Incidentally, for training purposes, rockets with heads made of concrete were fired in the appropriate weight classes.

RP-3 rockets were used for an astonishingly long time and against a wide variety of targets. Fired from Hurricane, Beaufighter, Mosquito, Swordfish and Typhoon, this weapon was used against the full range of ground and sea targets that the RAF faced during the war years. Even after 1945, the RP-3 continued to be used in more or less unchanged form and was deployed in the conflicts of the emerging Cold War. Incidentally, the last "live" use was by Hawker Hunter in Aden in 1964; surviving stocks, however, were then rapidly replaced by the new SNEB missiles fired from Matra launchers until 1967.

My model shows the Hawker Typhoon MN882 of No. 198 Squadron, a unit formed in December 1942 and equipped with the type from the beginning. Unlike most other Typhoon units, the 198th Squadron was mainly engaged in escort duties and "Ramrods" over occupied France from its base at Manston until June 1944. It was only after D-Day that its pilots became specialists in the risky business of low-level flying and attacks on ground targets; but this then not in short supply: 198 Squadron was massively involved in the fierce fighting around Caen and Falaise. In July, it was transferred to France; at the end of the war, 198 Squadron was in Wunstorf, Germany.

About the model and the building process
Hasegawa's slowly aging but nevertheless recommendable kit did not offer any challenge that I had not already described in the article on the parallel-built Typhoon of "Zirkus Rosarius". Accordingly, the prominent oil cooler was completely rebuilt from the etched parts of Eduard's excellent set and the somewhat washed out gun fairings were exchanged for metal ones.

What can be mentioned here as a special feature, however, is the representation of the RP-3 rockets by the resin and metal parts of the recommendable "Brassin" edition by Eduard. These do cause a certain amount of extra work - here I am thinking especially of the decals for the numerous markings - but it is well worth it. Last but not least, the distinctive ignition cables, the "pig tails", can also be shown, which adds a degree more life to the representation. 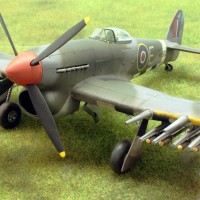 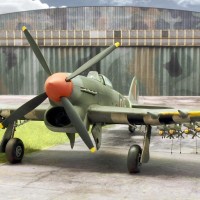 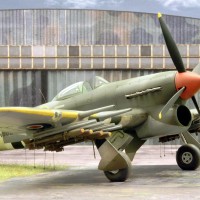 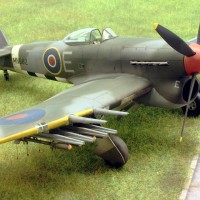 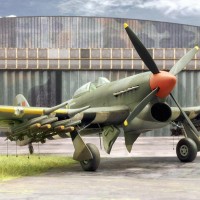 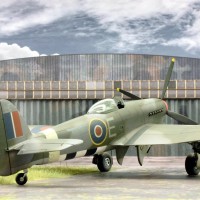 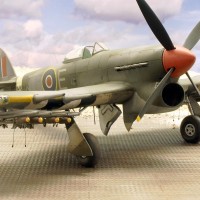 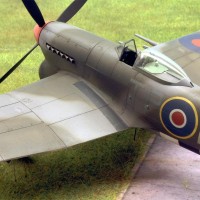 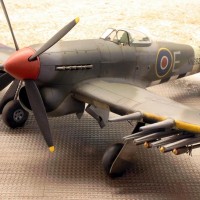 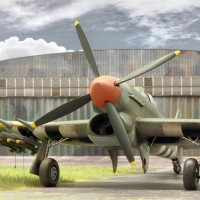 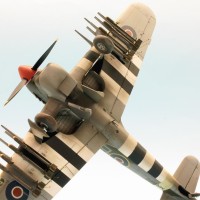 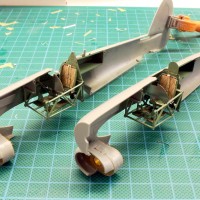 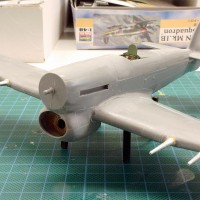 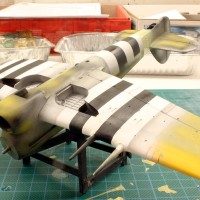 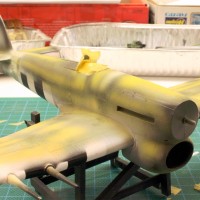 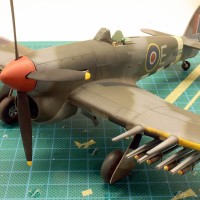 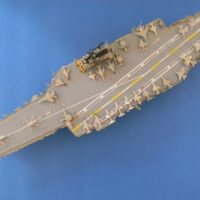 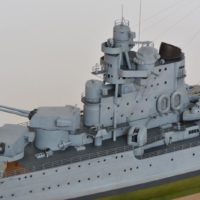 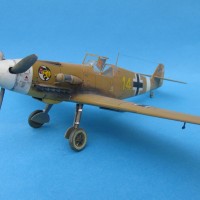 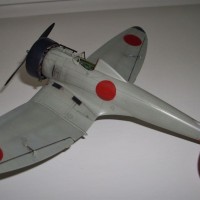