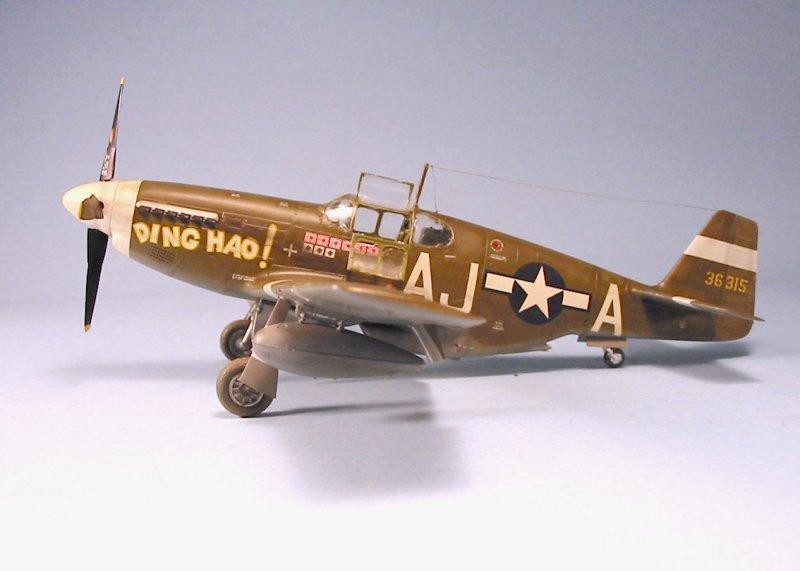 Born in China, the son of Methodist missionaries, James H. Howard joined the U.S. Navy in 1938. After graduating from flight school at Pensacola, Ensign Howard was assigned to VF-6, flying the Grumman F3F-2 off the USS “Enterprise.” Those readers who have seen the Warner Brothers movie “Dive Bomber” have seen Howard: he’s flying 6-F-18 at the end of a long formation of F3F-2s in one of the air-to-air shots. In the Spring of 1941, tiring of the life of a junior officer in a prewar squadron and interested in what was happening in the country of his birth, Howard was one of 100 young American pilots from the USN, USMC and USAAC to resign his commission and join the American Volunteer Group, headed to war in China.

Howard was assigned to the Second Squadron of the AVG, as the senior Flight Leader under Squadron Leader Jack Newkirk, and first saw combat when the “Panda Bears” of the 2nd Squadron relieved the “Hells Angels” in Rangoon on December 30, 1941, following the week of battles with the JAAF that began on December 23 and had seen the AVG christened “The Flying Tigers” after the great air battle over Rangoon on Christmas Day. On January 3, 1942, Jack Newkirk led Tex Hill and Howard on a dawn strafing mission against the Japanese fighter base at Tak airdrome in Thailand. The three P-40s arrived over the field just as the 77th Sentai was preparing to take off for a mission to Rangoon. With 8-10 Ki.27s already airborne, the strafing mission was even more dangerous than expected. As Howard strafed a Nakajima preparing to take off, Tex Hill shot another off his tail. Then Howard was hit by ground fire, and his engine died. As Newkirk and Hill raced away, Howard set up for a crash landing. At the last moment, the Allison came back to life, and Howard was able to make his getaway.

On January 4, Howard met the enemy in aerial combat when the JAAF attacked Mingaladon Airdrome, during which the Pandas shot down six fighters and eight bombers, of which Howard claimed one Ki.27 exploded. With two more fighters shot down the following day, and two Ki.21 bombers on January 6, Howard was an ace. On January 23, he scored his sixth and final AVG victory, another Ki.21 over Rangoon.

Following the disbandment of the AVG on July 4, 1942, Howard returned to the United States. That fall, he was inducted into the USAAF, promoted to Captain, and sent to a P-38 group; at a height of 6' 2," he was considered too big to fit in a P-39. Howard soon realized the P-38 was an airplane still full of problems, and that it would be awhile before he would ever see operations again. A friend had joined a new P-39 group and let him know there was need of a senior squadron commander. He managed to convince General William Kepner that he could indeed fit inside a P-39, and was thus assigned in the spring of 1943 to the 354th Fighter Group as commander of the 356th Fighter Squadron, then training at Hamilton Field north of San Francisco. Howard’s combat experience was put to good use in training the younger pilots. That fall, the 354th arrived in England as part of the tactical Ninth Air Force.

In September, 1943, the 354th was assigned to Boxted Airdrome, where they found themselves equipped with the brand-new North American P-51B Mustang. At the time, because the RAF had used the Allison-powered Mustang as a tactical fighter, the Merlin-powered P-51B was assigned to a similar role in the USAAF, since the P-47 had been chosen as the escort fighter for the 8th Air Force. Even without drop tanks, the Allison Mustang had been the first single-engine fighter capable of flying to targets in Germany from England. With two 75-gallon drop tanks, it was discovered the P-51B had the longest range of any USAAF fighter. As Howard later described the airplane, “it was a fighter pilot’s dream.”

On October 14, 1943, the Luftwaffe fought the 8th Air Force daylight bombing offensive to a halt over Schweinfurt. After losing 65 of 290 unescorted B-17s that day, with nearly all the survivors hit by enemy fire, the 8th Air Force didn’t have 100 bombers that could have flown a mission the next day. Fortunately, bad weather over the Continent for the next six weeks covered the failure of unescorted daylight bombing, during which time two P-38-equipped groups - the 20th and 55th Fighter Groups - went operational in the 8th. By the end of November, the 354th - which had taken the name “Pioneer Mustangs” - was ready for operations. Two 9th Air Force P-47 groups were already flying escort missions for the 8th Air Force while the organization built its strength, and the 354th was also given that assignment.

Lt. Col. Don Blakeslee, at the time Deputy Group Commander in the 4th Fighter Group, led the 354th on their first operational missions. The Mustang was the plane Blakeslee had been looking for: one with the performance of a Spitfire and the range to go anywhere in Europe. His reports finally got the attention of 8th Air Force HQ, and the 354th was temporarily assigned full-time to the 8th Air Force for escort missions, though the 9th Air Force would not give up complete control of the best fighter in their command.

With their first escort mission on December 13, 1943, the 354th proved the worth of the Mustang, as they provided target support over Kiel - at the time, this was the longest-range mission flown by the 8th, well over 400 miles one way. In following missions during December, Howard alternated leading the group with Group Commander Harold Martin, with one flying wing on the other alternately, inasmuch as Howard had the most combat experience of any man in the 354th. In January 1944, Howard and Martin began alternating missions as group leader. During this time, they were still working out the “bugs” in the P-51, with the result that frequently over half the unit would have aborted for mechanical failures by the time they reached the target. As the only fighter group in the ETO capable of performing their mission, it was “do or die” regardless of how many airplanes made it over the target. On January 1, the group “came into its own” with a mission to Kiel that resulted in 15 pilots claiming the destruction of 16 Bf-110s and Me-210s that attacked the bombers.

On January 11, 1944, Howard led the group on a target support escort mission to Oschersleben and Halberstadt, 60 miles southwest of Berlin in central Germany. By now, his Mustang carried the name “Ding Hao!” which was Chinese for “Very Good.” As the 354th reached the bomber stream, they saw the B-17s and B-24s were already under heavy attack from the Luftwaffe. Howard dispatched the 353rd “Fighting Cobras” to the far side of the stream, while directing the 355th “Pugnacious Pups” to cover the near side, while he took the 356th “Red A*s” squadron (so named in tribute to how a pilot felt after a 6-hour mission in a P-51) to the head of the stream. Fewer than 40 Mustangs had to provide cover for over 500 bombers.

As the 356th arrived in position, 36 Bf-109s, Bf-110s and Fw-190s dove through the Mustangs as they headed toward the bombers. Howard latched onto a Bf-110 and exploded it. As he closed on a Fw-190, the pilot bailed out before he could open fire. Howard became separated from the rest of the group, and was now the sole defender of the bomber box, in lone battle against more than 30 enemy fighters. Fellow pilot Richard Turner described what happened next in his memoir “Big Friend, Little Friend”:

“Howard wasted no time in maneuvering, but lunged head-long with engine at full bore, challenging the whole stinking mess in a brazen direct frontal attack, a magnificent but futile and fatal sacrifice, seemingly, to the on-looking bomber crews who could see the astronomical odds. The entranced bomber crews watched in admiration and fascinated awe as the tiny Mustang hurtled into unrelenting interception of the massive German gaggle, but instinctively prepared for heavy attack following the expected sure destruction of their lone defender.” Howard’s account of the action states “I was so busy in my constant pursuit of the enemy fighters, I may not have seen the presence of other enemy aircraft that were out of my visual range.”

The P-51B at that time had a big problem in that the guns were installed at an angle in the thin wing, which meant the ammo belt feeds could become jammed under application of high-G maneuvers. On his first swing toward the Germans, Howard lost one gun. More German fighters made attacks on the bombers and he was soon down to one operating weapon, the outboard left machine gun; this threw off his aim, but he continued attacking the enemy, forcing the breakup of their formations and blunting their attacks on the bombers. By this point, his combat against the Germans had been going on for 30 minutes. Now low on ammunition, Howard made feint attacks, which still forced them to maneuver away, thus protecting the B-17s. A few moments later, as he chased off a persistent Ju-88, Howard was forced to break off combat to return to England. As Major Allison Brooks, leader of the bomb group that day later recalled, “For sheer determination and guts, it was the greatest exhibition I’ve ever seen. It was a case of one lone American against what seemed to be the entire Luftwaffe.”

While the 354th had its best day to date, with claims of 18 destroyed, 8 probables and 16 damaged - of which Howard claimed two destroyed, two probables, and two damaged - the bombers had lost 55 aircraft to the Luftwaffe. One group of Mustangs was not that big a change in fortune.

The next day, 8th Air Force commander Jimmy Doolittle asked 9th Air Force fighter commander Pete Quesada who the lone pilot who had taken on 30 enemy aircraft was, since the survivors of the 401st Bomb Group wanted to know who had saved them. Examination of Howard’s gun camera film, which saw him awarded four victories, revealed he was the pilot everyone was looking for. When the press - including Walter Cronkite, Marguerite Higgins and Andy Rooney - was brought in later that week to meet Howard, it was also the first public presentation of the P-51 Mustang in the ETO. “True” magazine published a painting of Howard with his airplane on their cover, with the title “One Man Air Force.”

In May, 1944, upon completion of his combat tour, Lt. Colonel James H. Howard became the only American fighter pilot in the ETO to be awarded the Medal of Honor.

Howard's autobiography, "Roar of the Tiger" is a book to be grabbed whenever you see one (long out of print) 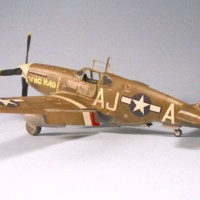 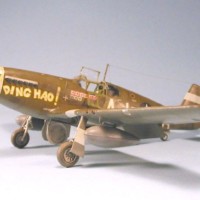 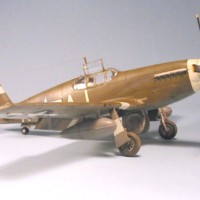 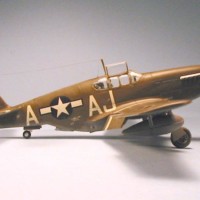 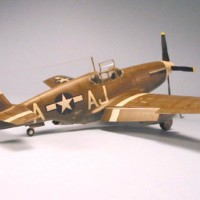 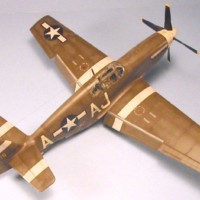 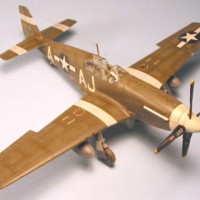 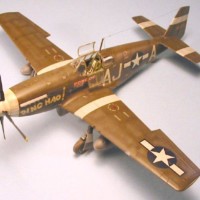 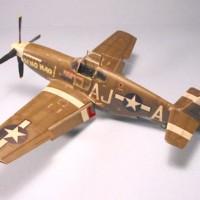 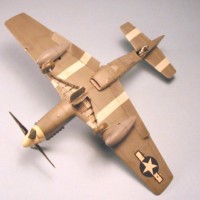 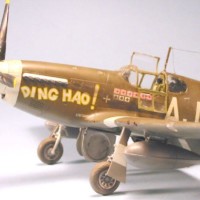 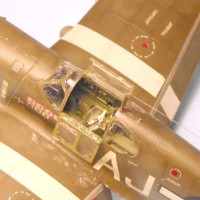 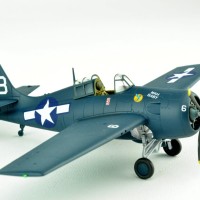 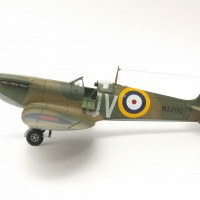 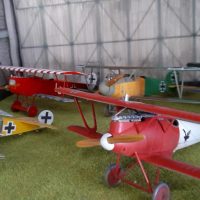 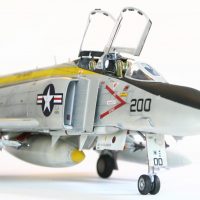