For whom the bell tolls: an Fw-56 "Stösser" in republican Spanish colours. 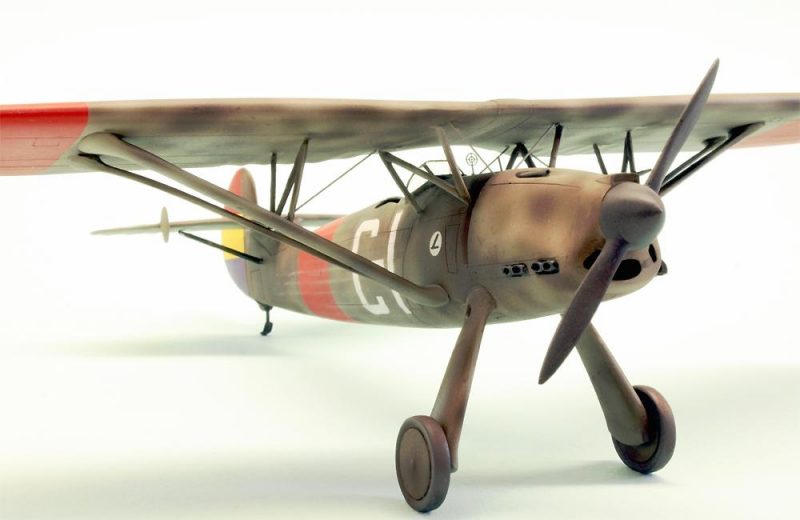 The FW-56 Stösser
The Fw-56 "Stösser" is perhaps not the best known type of Kurt Tanks, but with about 514 produced examples and its importance as a trainer for the newly formed Luftwaffe it is not exactly exotic either. Nevertheless, the "Stösser" presented here is a quite remarkable unicum, because it shows a Spanish-Republican specimen, while the machine originates from the stocks of Germany, which supplied the opposite side. Did this really exist?

The story behind it is, I think, even more remarkable than one might suspect. The Fw-56 in the characteristic markings of the Republicans had taken quite a circuitous route from the Focke Wulf factory in Bremen to the front lines of the Spanish Civil War. But before I get to that, a few words about the Fw-56 itself.

This elegant high-wing monoplane was built from 1933 onwards in response to a tender for a new advanced trainer and "Heimatschutzjäger" for the Luftwaffe, which was undergoing a vehement rearmament. The first flight took place at the end of the year, in November 1933. After the type had prevailed in comparison flying against competitors such as the Arado Ar 76, the "Stösser" went into series production from 1935.

The new high-wing aircraft proved itself so well as a trainer in the fighter pilot schools that it was used in this role until the end of the war. However, Nazi Germany's restrictive export policy limited users outside Germany to Bulgaria with six, Austria with nine and, after 1938, Hungary with 28 aircraft. Outside Europe, Bolivia was later added with two. An Fw-56 for Spain - and even one for the "wrong" Republican side - does not appear anywhere on the official lists. Since their existence is well documented by photos, the question arises as to how this came about.

In fact, on the basis of sources that are still available, it has been possible to reconstruct a unique story of an arms trade that illuminates the situation in Europe at the time. A story that, with its numerous twists and abysmal characters, sometimes seems as if it had flowed from the pen of a novelist who writes too much. For those who are interested, here is a short summary of a long story:

The years 1919- 39, often called the "interwar period", were full of armed conflict. A particularly abhorrent war was the attempted conquest of the then Empire of Ethiopia by Fascist Italy from October 1935, with Emperor Haile Selassie trying to procure war materials on the international arms markets for his troops, who were technically inferior to the Italians.
This is where the British arms dealer John Ball of the "Soley Armament Company" enters the scene. He managed to pull off a rather unique coup: he was able to purchase three new Fw-56s directly from the production line at Focke Wulf in Bremen - without any official German permission. However this deal, which had to bypass the representatives of the RLM, had gone through and however sensible the acquisition of high-tech fighters was for the Ethiopian side - the three Fw-56s packed in crates started their journey to Ethiopia in April 1936, complete with armament, ammunition and operating supplies. However, the freighter was still at sea when Ethiopia had to lay down its arms in May 1936.

John Ball's agents now tried to get rid of the hot commodity at a profit, since nothing would come of the Ethiopian deal. Unofficial contacts with Great Britain only led to the freighter, which was still at sea, being banned from British ports. It was not until June 1936 that the ship moored in Antwerp. However, it was not allowed to unload its cargo.

In the meantime, a new conflict had broken out in Spain that was rapidly escalating into a bloody civil war. John Ball's representatives in London had succeeded in reaching a deal with agents of the Spanish nationalists. However, nothing was to come of this deal either: Belgium had confiscated the entire armament and ammunition, and the Spanish nationalists withdrew from the purchase of the aircraft. As it became clear that the Belgian government would soon ban all deliveries of war material to the Spanish war zone in order to maintain neutrality, Ball hurried to have the planes brought to the Dutch port of Rotterdam.

From here, a last attempt was made to get rid of the cargo bound for Spain: without further ado, the fighter planes were offered to the Republican counterpart. This time the deal was to succeed: after half a year in crates and at sea, the "Stösser" were brought ashore in Alicante on 1 October 1936, taken over by the Republic of Spain, assembled and flown to their operational locations.

In Spanish Republican service, the three Fw-56s were used in their original role as fighter trainers. My "Stösser" shown here was flown from 1937 onwards in a fighter pilot school - in Spanish "Escuela de Vuelo de Alta Velocidad" at El Camoli, a base near Cartagena. The peculiar spotted camouflage was provisionally applied there over a colour applied in Bremen, usually described as RLM 65 or RLM 62.

On the building process
The markings for this unusual machine come from the "Plastic Planet Club" kit, but the kit moulds go back to a production by "Historic Plastic Models" from 2003. After two models built, I can say with a clear conscience that the plastic parts meet the wildest "short-run" expectations.

The division of the plastic parts makes sense and seems to be well thought out. For example, there is a bit of interior behind the large intake opening of the Argus-As- 10 propellant system. Looking at the cockpit, I also like the construction of the side panels and the design of the seat or its suspension.

However, a lot of initiative is required right from the start. Even the building instructions often indicate that parts have to be made by yourself, but above all many a part has to be made anew because the part included is simply not usable. As an example I mention the two MG muzzles, which are very well visible on this strutted high-wing aircraft. But I also replaced - in a somewhat time-consuming process - the entire inner bracing of the wing-fuselage connection. This was done because of the experiences I had to make on this model and refers to the second Fw-56 presented in a following report.

Is it surprising when I say that literally every part had to be reworked, trimmed, corrected -or replaced? However, I don't necessarily want this to be understood as a complaint, because with a little consistency and joy in improvisation, one does reach a goal here that is worthwhile. The close involvement with the model and the model itself is a real pleasure!

My opinion about the decals of the kit is ambivalent. On the one hand I may praise the refined fineness of the carrier film and the absolutely unproblematic processability of the decals. They nestle almost invisibly on the surfaces and seem, with a little of softener, to melt as it were bodilessly into the substrate.

On the other hand... Yes, unfortunately, a good part of the decal material has slipped out of the register in such a way that it simply cannot be used. On this model, only the large letter marking on the fuselage was needed, which was neatly printed and therefore used.

As the above already suggests: this kit demands a lot of attention, as does the unique model, which literally tempts one to do in-depth research. The result, however, makes the modeller happy; the multi-faceted background history makes the model stand out in the showcase just as much as the Spanish-Republican markings. Last but not least: there are not many opportunities to get an Fw-56 "Stösser" in the showcase. 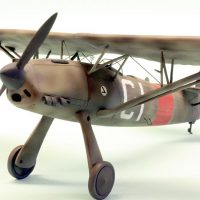 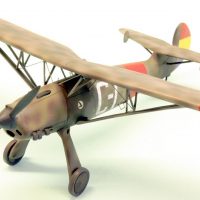 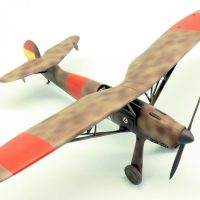 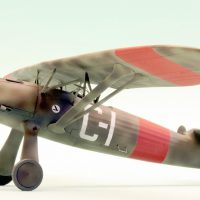 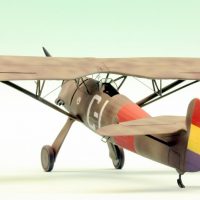 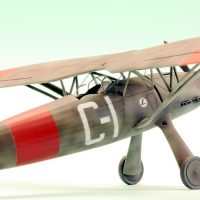 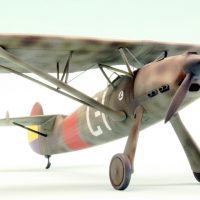 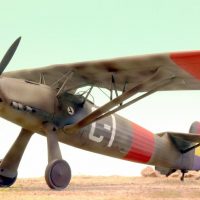 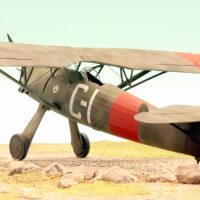 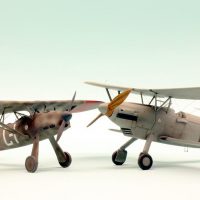 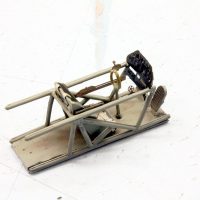 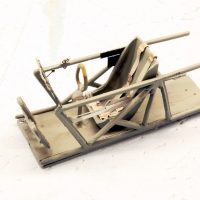 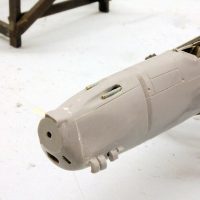 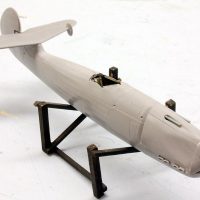 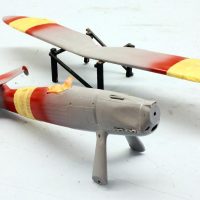 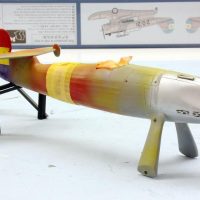 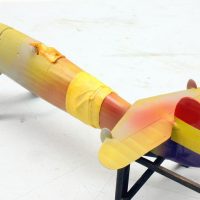 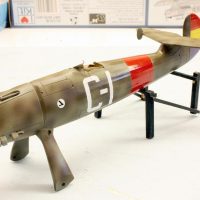 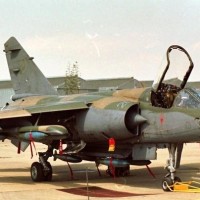 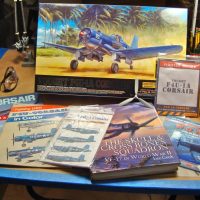 Next up, after years of collecting references.....
Rob Anderson 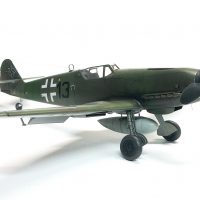 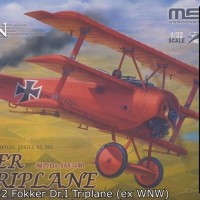